ToolGuyd > Awesome & Cool > 10 Reasons to Visit the World Maker Faire in NYC (Sept 23 & 24, 2017)
If you buy something through our links, ToolGuyd might earn an affiliate commission.

The 2017 annual World Maker Faire in NYC is scheduled for this weekend (September 23 and 24, 2017), and if you live in or around the NYC area, I highly encourage that you consider making it a part of your weekend plans. It will once again take place at the NY Hall of Science in Queens.

I attended a number of Maker Faires, and always have a great time. It’s hard to adequately describe Maker Faire, but hopefully these 10 points this will show the kind of things you can expect to see and experience at this year’s event.

In a nutshell, Maker Faire is a DIY gadget, electronics, robotics, tinkering, and science festival. There are a lot of child-friendly displays and booths, but there’s fun for adults too.

1. A Good Time for Everyone 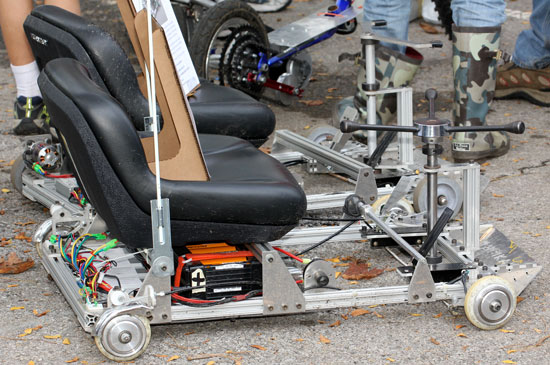 When I envisioned Maker Faire, I thought it would be all about Arduino microcontrollers, robotics, and 3D printing. While it has all of these things, there were a lot of things I didn’t expect – art, science, environmental awareness, and a lot of smiles.

There seemed to be a very strong emphasis on interesting activities and demonstrations aimed at children and young adults (which is probably why Disney is once again a prominent sponsor), but there were still plenty of interesting things for adults to experience. 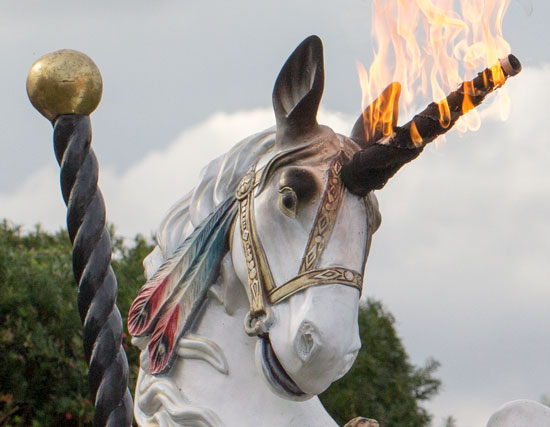 I don’t know why this carousel unicorn has a flaming horn, or why they gave it male anatomy (fuel line drain?). 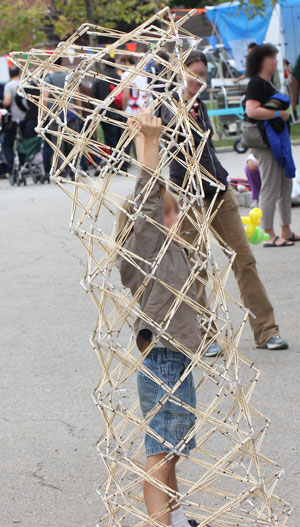 Or who crafted this large finger trap-like structure. 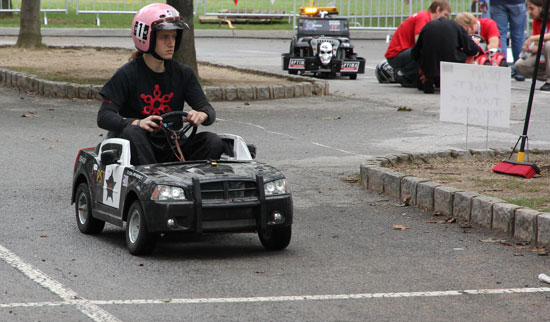 2. Fun and Inspiring Things to See and Do 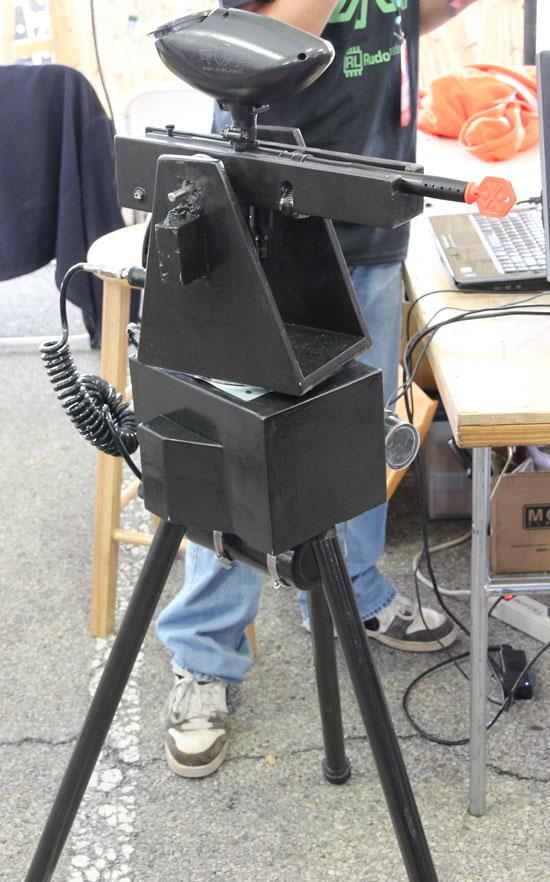 There were plenty of exciting project demonstrations, such as this paintball sentry turret, and I was especially enamored by the small sculptures of Josef Szuecs, a sampling shown here: 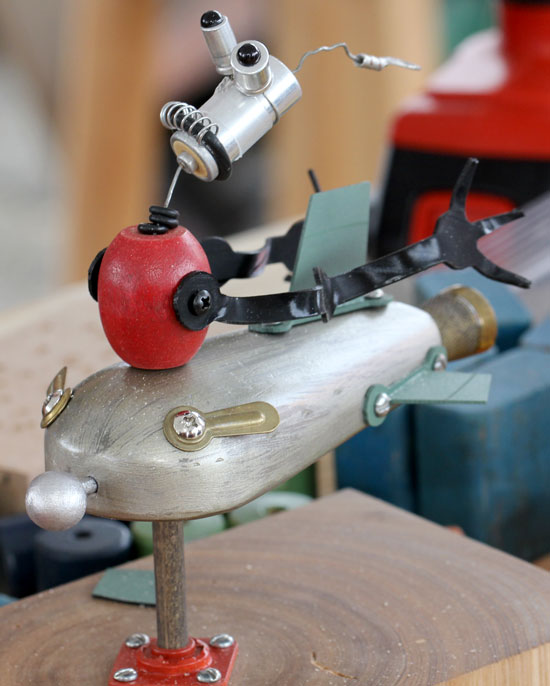 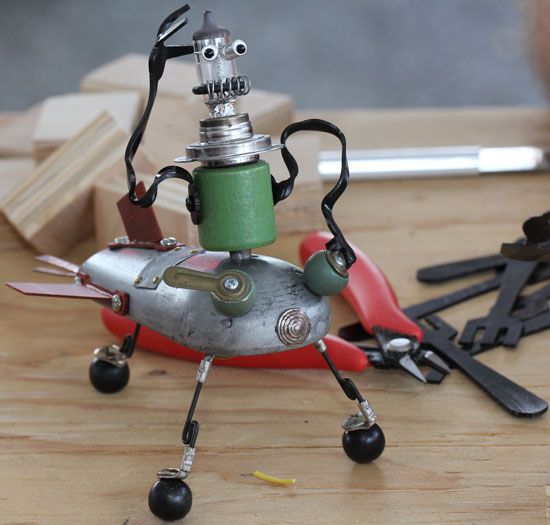 Josef had a table full of creations and parts in front of him, and built small figures as you watched.

In case you couldn’t tell, I especially liked Josef’s robot and rocket mash-ups. 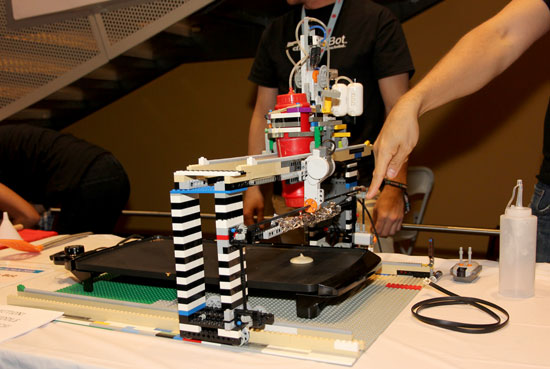 Some of the projects might make you hungry – here is an automatic Lego Mindstorms-controlled pancake griddle.

3. Experience the Latest in 3D Printing 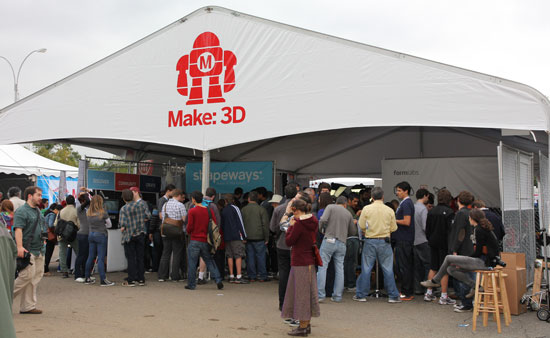 Are you thinking about possibly buying a 3D printer? Do you want to see the types of creations you can have online 3D printing services make for you? Looking for more things to ooh and aah about? The 3D printing tent was one of the busiest areas at the fair.

There were quite a few desktop CNC demonstrations as well. 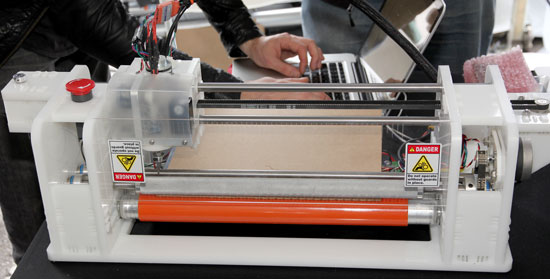 I’m going to be honest here – I don’t remember what this is, but it sure did look cool. From the looks of it, the contraption is a CNC cardboard/paper/vinyl cutter.

Update: This is an Other Labs Othercutter CNC cardboard/soft sheet cutter (more info).

5. The Latest DIT – Do it Together – Innovations 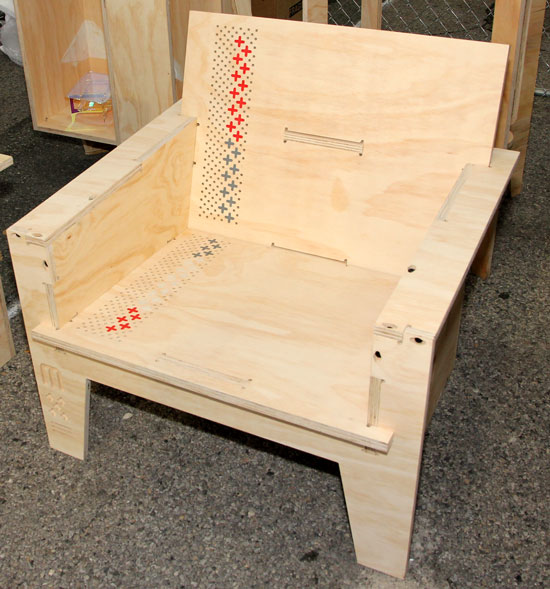 There was a sizable booth showcasing AtFab’s CNC-cuttable furniture. The joinery is done via plywood or other sheet materials cut via a CNC router, laser cutter, or water jet.

The AtFab booth is also where I learned about 100K Garages, a program created by ShopBot that connects those who want to buy CNC-cut parts with those who own CNC routers and similar machines. 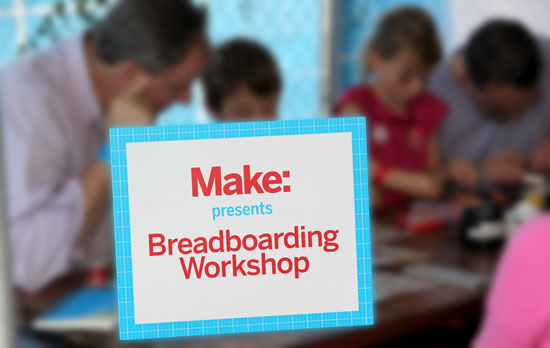 It was surprising to see that there were kids AND adults taking part in the breadboarding workshop. You pay a small fee ($10), learn how to wire a circuit on a breadboard right then and there, and leave with a small bundle of parts.

It is unclear as to whether this or the Learn to Solder workshops will return, but if they do, they will probably be near the MakerShed tent. 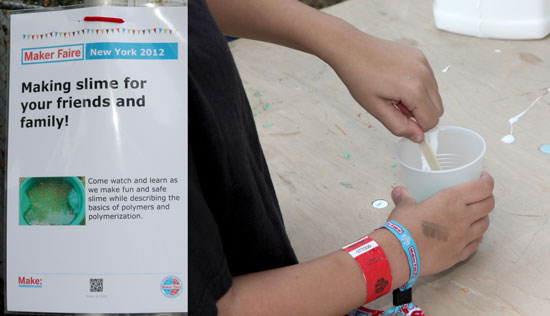 In a less frequented area, there was a booth where you could make your own slime. SLIME!

(If you can’t make it to Maker Faire, you can still buy some Elmer’s glue and borax and try it at home. Spangler’s has a great how-to.)

There were a LOT of activities, demonstrations, and hands-on exhibits for kids. 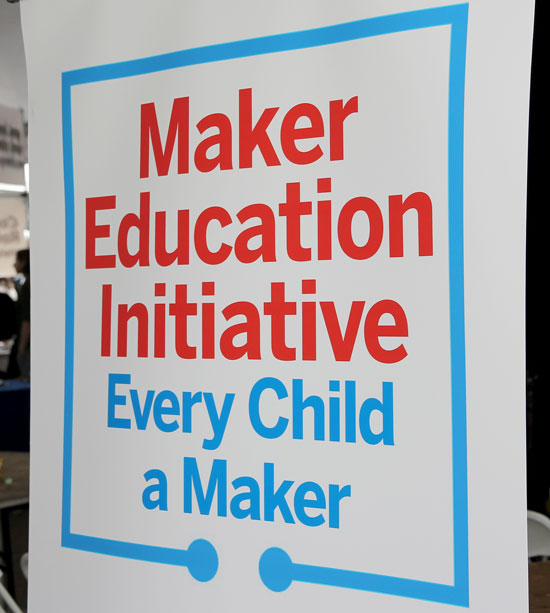 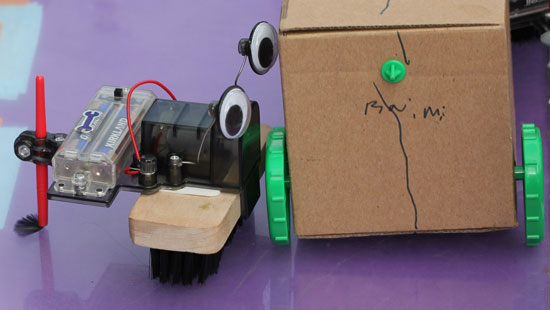 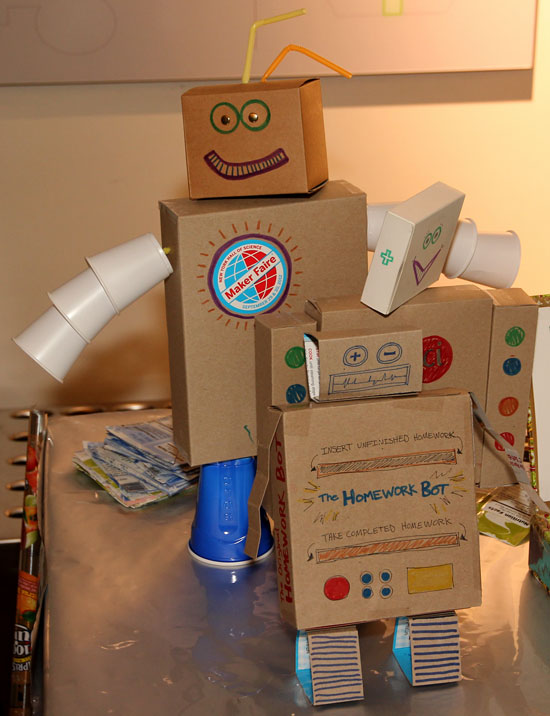 And also a homework bot that accepts unfinished assignments and churns out completed work. Ha! 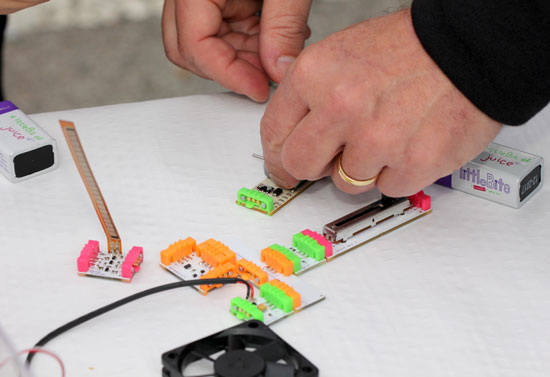 Little Bits had a small table but attracted a lot of attention. Looking closely at the hands, you could tell that Little Bits’ solderless snap-together electronic component experimentation kits caught the interest of adults as well.

Inside the museum was one of the largest paper-based marble roller coasters I remember seeing. It actually looked quite good for something made out of posterboard, paper, and a roll or two of Scotch tape. 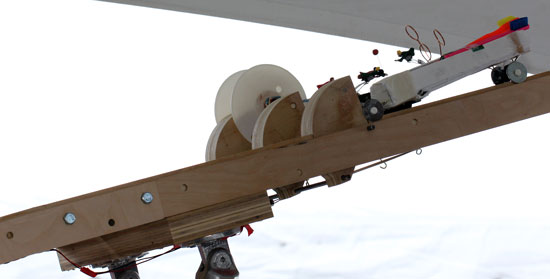 There was also a Nerdy Derby car race, where kids can either race their own car, choose from a selection or pre-made cars, or build their own car on-site.

8. See The Latest in Hobbyist Robotics

There were fewer robotics projects on display than I hoped to see, but I wasn’t disappointed with what I saw. 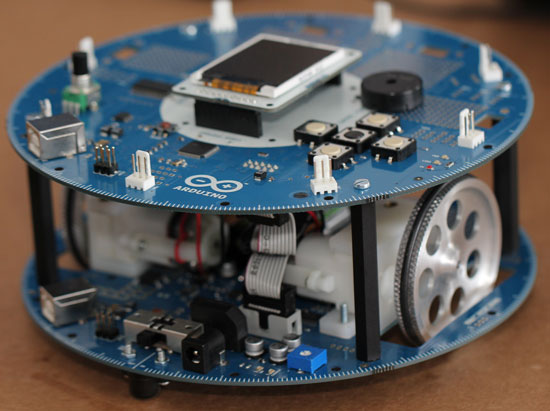 In the Arduino booth, visitors were able to check out Arduino’s new Starter Kit and also a robotics experimentation platform so new that the Arduino volunteers knew nothing about it. It wasn’t until May 2013 that the new robot was officially announced.

If you’re not familiar with Arduino, there will be many opportunities to see what can be done with this inexpensive and easy-to-learn microcontroller.

If you work Arduinos into your projects, you’ll want to check out the Arduino booth. There will also be a talk on Saturday – The State of Arduino where the latest developments are discussed. 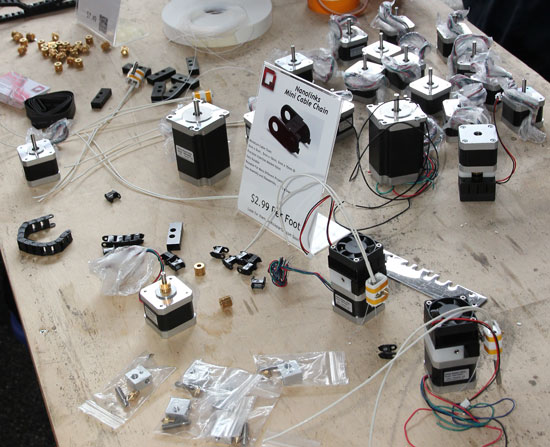 There are plenty of vendors showcasing their latest and greatest CNC gear, boards, and components.

Make Magazine’s MakerShed also puts up a big tent full of many of their latest kits and products. Be warned – the checkout line can get quite long.

You can also find plenty of handmade and artist-made goods to appreciate and purchase. 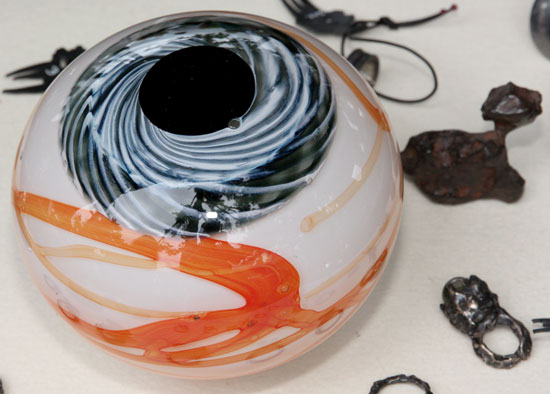 EYE didn’t write down the artist’s name (or did and lost the note), but this is a great example of how random some of the artists’ pieces can get. Next to the glass eye is what looks to be a slightly rusted meteorite fragment.

As for the tasty part, there are plenty of food vendors and treats to feast on.

What? A festival that celebrates creativity, invention, and DIY spirit

Where? New York Hall of Science
When? 9/23 and 9/24, 10am to 6pm
Ticket Prices: Tickets start at $25 plus fees if you order in advance online
More info? Maker Faire Home

Not near the NYC area?

Make Magazine hosts a major Maker Faire in the San Francisco Bay Area every May, and mini Maker Faires are held around the country (and world) other parts of the year.

Brainstorming: How to Make Best Use of a Corner for a Workbench or Tool Cabinet