ToolGuyd > Flashlights & Worklights > Organize Your 18650 Rechargeable Batteries with this USA-Made Holder
If you buy something through our links, ToolGuyd might earn an affiliate commission. 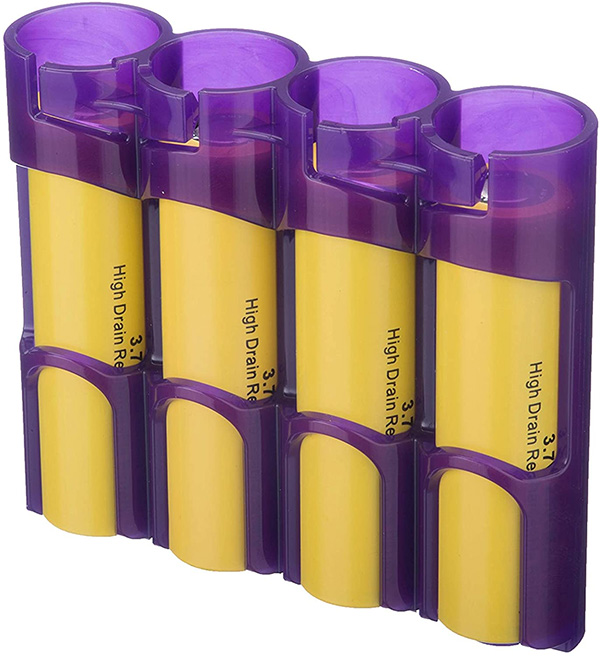 I know some of you like to use 18650 batteries for flashlights and other such devices. How do you keep your batteries organized? I don’t know how well these PowerPax battery holders work on 18650-sized batteries, but they work beautifully well on AA and AAA batteries.

When the positive terminal is up, I know the batteries are fresh. When batteries are drained and need to be recharged, they’re replaced in the holder positive-down.

After so many incidents with Rayovac alkaline batteries, and hearing that other brands leak just as much these days, I invested in a lot more rechargeable batteries, for everything from the TV remotes to certain kids’ toys. So, with more batteries floating around, I need a couple of holders to hold spares.

I like PowerPax products, as you could probably tell from my previous post. I posted about them earlier than that even, with a short post way back in 2011.

These holders are made in the USA from a hard and durable plastic (ABS?). I’ve taken them travelling, and they’ve just been perfect. You can buy them in several colors, although the color choices depend on the style and battery count.

The 18650 battery caddy can hold 4 cells and is priced at $5.95 (via Amazon). You’ll want to check out the Storacell website for more color options.

I’ve purchased all of my PowerPax products from Amazon, and yesterday placed a fresh order at Amazon and another at the Storacell website due to a pricing advantage on certain styles, even with having to pay shipping.

Amazon’s color options seem to be purple, orange, and clear.

A Better Way to Carry Spare AA or AAA Batteries