ToolGuyd > Hand Tools > EDC, Pocket, & Multitools > 3D Printed Tool Bracelet Looks Like the Leatherman Tread
If you buy something through our links, ToolGuyd might earn an affiliate commission. 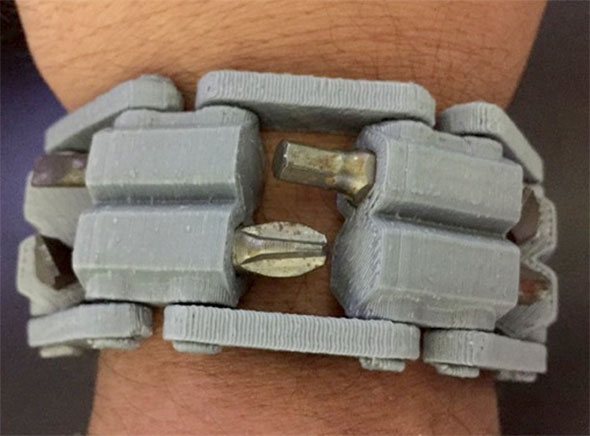 Over at Thingiverse, and discovered by 3Ders, Fernando Sosa has recreated the soon-to-be-released Leatherman Tread multi-tool bracelet out of plastic.

The Leatherman Tread will have an MSRP of $150 for the stainless steel version, and hopefully it’ll have a lower street price. Sosa’s creation sells for $50 on his Etsy page, or you can make your own using the free digital plans – if you have your own 3D printer.

The 3D printed tool wristband can hold 2 1″ screwdriver insert bits per link. 6 links means you can carry around 12 screwdriver bits on your wrist.

To me, the 3D printed version looks unfinished, and I would have concerns of long-term bit retention strength. Bits sliding around on my wrist? That would bug me. The printed multi-tool bracelet might also be less flexible than the Leatherman Tread, which has thinner and curved links designed to hug your wrist.

And yes, the 3D printed screwdriver bracelet is functional. You can take the bracelet off and position any of the bits for use. You probably wouldn’t want to use this tool for high torque applications, but the same could be said about the Leatherman Tread. But, as with the Tread, sections of the 3D printed version, as well as the individual bits, can be replaced if or when needed.

Here’s a quick video of the Tool Wristband’s latching mechanism:

No, it’s not as elegant as the Tread, and it’s still a little pricey if you choose to buy one rather than print it yourself.

While I am very much looking forward to the Leatherman’s release, I admire Sosa’s ability to recreate the Tread’s basic design and functionality. He could cut down on the bracelet’s thickness by designing it around Leatherman’s half-sized and double-sided screwdriver bits, which aren’t very pricey.

As it is, the tool wristband is not very aesthetically pleasing. Even so, getting it functional was probably the hard part. Polishing up the printed multi-tool’s look and feel might only take a couple of trial and error iterations at best, or elbow grease and finishing techniques at worst. It might be possible to achieve a clean and smooth near-injection-molded look.