ToolGuyd > Power Tools > Drills & Drivers > 5 Reasons to Keep Your Corded Drill
If you buy something through our links, ToolGuyd might earn an affiliate commission. 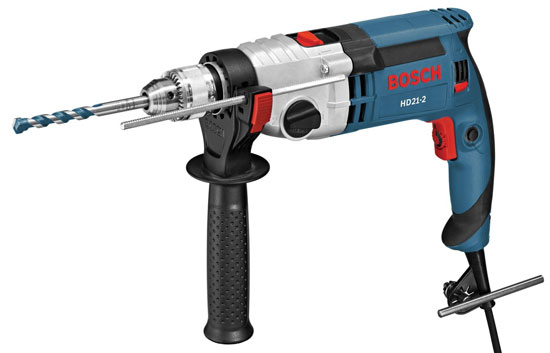 Cordless power drills are quite powerful these days, so much in fact that I don’t recall the last time an 18V model was too wimpy for my drilling or driving needs. Higher torque motors, plus how Li-ion batteries have great runtimes and low self-discharge rates, means I haven’t had to plug in my corded Bosch hammer drill in years. But I still use it anyways.

There are still a number of reasons to hold onto that corded drill buried at the bottom of your auxiliary tool box.

Plus there are times when you might want the higher speed for smaller bits. Taking a look at a drill speed chart (PDF via Fermilab), you’ll see that a lot of smaller bits are supposed to be run at higher speeds than cordless drills typically offer.

The power grid won’t run out of power, but your cordless tool battery might. Or rather, it will run out of power. Corded tools especially come in handy when misusing a drill for continuous-use non-drilling and driving operations, such as cleaning metal with a small wire brush attachment.

There’s also something to be said about pulling out a corded drill and knowing it will be ready to go. No charging batteries in advance, no having to check the power gauge, no having to know where your charger is at all times.

I’m a huge fan of ratcheting single-sleeve keyless chucks. They’re quick and easy to use, and despite the plastic construction of many models’ chucks, they’re pretty bombproof.

But there’s something about keyed Jacobs chucks – or other manual chucks – that I find reassuring. They are far tougher than keyless chucks, and while I’ve never had a keyed chuck slip with smaller bits, I can’t say the same for keyless ones.
/10 out of 10 I want a keyless chuck. But for that occasional use where I want or need a drill with a stronger or more precise chuck, I pull out my corded hammer drill.

If you need to use a hand drill often, cordless is almost always the better way to go. But what if you don’t use it often? Pro’s and DIYers that don’t use a cordless drill regularly can run into problems with batteries.

Last week I gave away a Porter Cable 18V drill/driver and Li-ion battery to a reader. He reported back that the battery isn’t working and is giving errors when used with his charger. It was working the last time I checked, but that was some time ago. So it appears the battery self-destructed sitting on the shelf.

My father still uses a Black & Decker corded drill from who knows when. Maybe the early 1980’s? That drill is a dinosaur, but it still serves his occasional drilling needs.

My corded hammer drill is maybe 5 years old now, and I expect it to endure periodic use for the next 5 years. And then maybe it will give me another 10 years or use. The cordless drill I bought a year ago? The batteries will eventually wear out, at which point the manufacturer will probably have already moved to a different form factor. Again.

Hammer drills usually have higher speeds than rotary models. I opted for a Bosch model and don’t regret the decision one bit.

Please bear in mind that my points are in regard to common drilling operations of holes maybe 1/2″ and smaller in wood, non-ferrous or sheet metal, plastic, and even masonry, as opposed to something like drilling 7/8″ holes 6″ deep in concrete.