ToolGuyd > Power Tools > Grinders & Sanders > A First-Time Festool Owner’s Impression of the Pro 5 LTD Random Orbital Sander
If you buy something through our links, ToolGuyd might earn an affiliate commission. 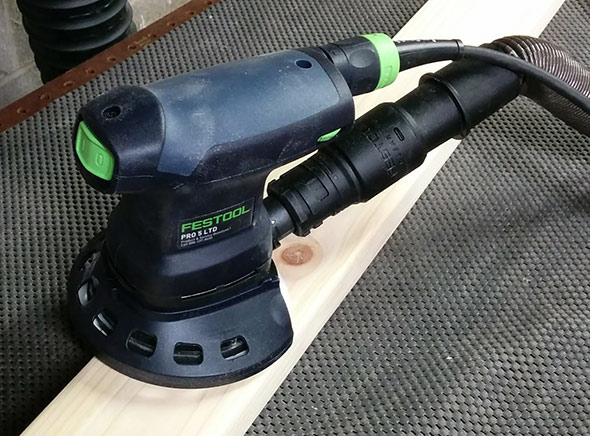 Way back in October 2016, Stuart posted about the new Festool PRO 5 LTD random orbital sander, which was just $99. The deal is long gone, but according to a Festool representative, the Pro 5 was just the US and Canadian version of the ETS 125 REQ. It also came with a sample package of Granat abrasives and a voucher for $50 off a future Festool tool purchase.

I ordered one of the Pro 5 LTD kits the same day the article posted (for transparency, ToolGuyd reimbursed me), and had to wait until March 2017 for my Pro 5 LTD to finally arrive. I got around to testing it last week.

I’m not going to go into detail about the features of this sander*, when and why you’d use it, or how to set it up. I’m going to go straight into my impressions, but that does require a little bit of setup.

*You can get more background in the original deal post: Crazy Sale Pricing on a Festool PRO 5 LTD Sander ($99), But Should You Take the Bait?

I needed a couple of smooth-finished 2x4s, for a project I’m working on that involves another tool I’m reviewing. Rather than do it the fast and easy way with my planer, I thought I’d give the Pro 5 a shot and compare it to the Bosch ROS20VSC I purchased while I was waiting for this sander to ship.

I needed two boards, so I figured I’d pre-sand one with the Festool Pro 5 LTD and the other with the Bosch ROS20VSC. Then after I build the project I can quickly touch up the joints and sand with a higher grit before painting.

The last time I used the Bosch sander was a few months ago, on a cutting board project. Unfortunately I haven’t been able to spend much time on projects lately.

The coarsest grit paper the Pro5 came with was 80 grit Granat paper, otherwise I’d have chosen an even coarser grit. I knew full well that I’d be making a little more work for myself by using 80 grit on some pretty rough SPF lumber — not to mention that it’s probably wetter and sappier than any hardwood or even select pine that you’d normally use with a ROS sander. But, I figured this would give both sanders a workout.

To tell you the truth, I wasn’t impressed with the Pro 5 at first. From all the hype about Festool, I was expecting life changing performance. It seemed to perform about as well as I remembered the Bosch perform. I really didn’t notice any appreciable dust left on the board, although I was sanding on my downdraft table. The Festool felt relatively smooth with only a little vibration. It seemed a little more compact and heavier.

On some of the rougher areas, it wanted to pull away from the direction I was moving it, but not in an uncontrollable way. It really didn’t bog down when I put pressure on it to quickly remove the black-stamped grade marks, but then I didn’t intentionally try to stop it either. 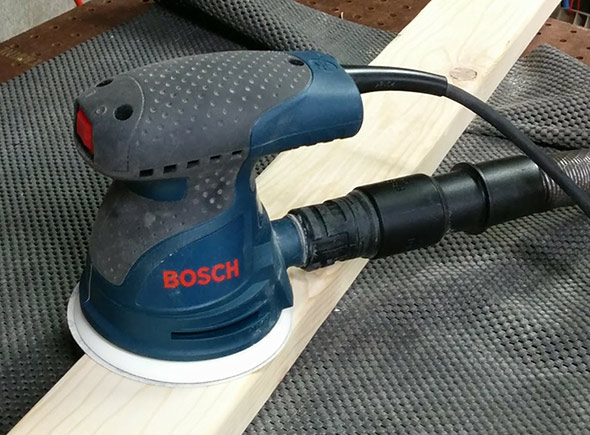 Then I pulled out the Bosch and some other 80 grit paper (the Granat paper doesn’t fit the Bosch of course). At first I was using some really cheap paper that lost its grit after about 2 feet of board. I really didn’t think that was a fair test. So I dug up some better 80 grit paper out of a drawer and finished with that.

All along, I’m noticing a few things. The grip is a bit larger on the Bosch. The sander seems lighter, but the body is definitely wider. Not really any less comfortable, just different. Then I start noticing I’m seeing more dust on the board than I did with the Pro 5. Not a lot, but enough to notice it wasn’t there when using the Pro 5. After a little while, I started noticing the sander was vibrating just a bit more. The more time I spent using it, the more I felt it. When I finished the second 2×4, my hands were just a little numb.

On the plus side, I really didn’t bog down the Bosch when I put pressure on it to remove the stamp marks either. I definitely did notice the Bosch didn’t want to fight me in really rough areas as much as the Festool. That was rare though, both sanders were typically pretty smooth and went were you pushed them with little effort. It may have been a matter of the paper. Maybe the Granat paper remained more aggressive even after using it for a while. It would be nice to be able to test the two sanders with the same paper.

The big differentiation between these two sanders is cost. Remember, the Pro 5 LTD isn’t available anymore, so you have to look at the closest available model: the ETS 125 REQ. The ETS 125 REQ runs about $195 while the Bosch ROS20VSC runs about $69. The Bosch can use common sandpaper you find at Home Depot or Lowes, while the Festool requires special paper — unless you use a mesh-type paper.

The big question: is the slightly better dust control and reduced vibration worth the higher cost? It all depends, as both are capable sanders. But if you are using a tool like this everyday, the lower vibration and better dust collection is going to add up over time — less fatigue and less cleanup. If you don’t have as much money to spend, the Bosch is still a good choice.

If you are worried about vibration but don’t want to pay more, the vibration of the Bosch is easily mitigated by wearing gloves. I find that I can go for as long as I need to without my hands getting numb if I have decent gloves — the plus side is I get fewer splinters too.

Compensating for dust collection is a little harder, but I usually sand over a down draft table which keeps any airborne dust to a minimum.

Note: The ETS 125 doesn’t seem to be available anywhere right now, and the ETS 125 REQ looks to be coming soon.

Stuart’s Note: A lot of Festool tools aren’t as “just grab and go” as other tools. My understanding is that the ETS 125 and Pro 5 are more finish sanders than general do-everything models.