ToolGuyd > Hand Tools > Mechanics' Tools > Allen Gearless Ratchet for Minimal Swing in Tight Spaces
If you buy something through our links, ToolGuyd might earn an affiliate commission. 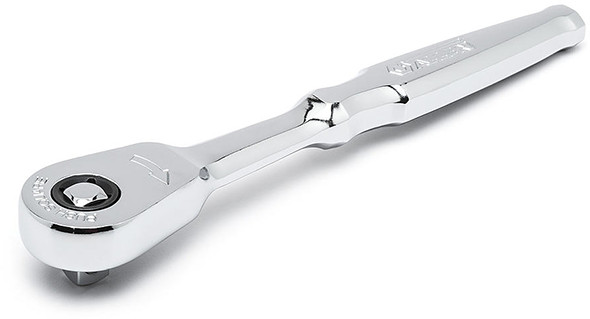 Allen has come out with a new gearless ratchet that is said to provide a zero point swing arc and requires less than 2° of movement to operate.

I reviewed Kobalt’s Direct Drive gearless ratchet last year, and it worked surprisingly well. The only downside was that it was slightly bulky. This new Allen gearless ratchet looks like it might be a little more compact, thanks to its teardrop-shaped head, but it’s hard to say.

The new Allen gearless ratchet is not reversible. Well, it is, but not in the same way as most other ratchets. In order to reverse this one, you push the drive tang through the head to the opposite side, and then flip the ratchet over.

Generally, I’m not much a fan of flip over to reverse ratchets and ratcheting wrenches. In some usage scenarios, ratchets and ratcheting wrenches can be trapped between a fastener and obstruction, and the easiest way to remedy the situation is to reverse the ratchet. This mostly happens (at least in my experiences) when removing a fastener and backing a tool into a bad spot.

Still, gearless ratcheting is nice and can be a big help when working in tight corners. A ratchet like this is less advantageous if you already have a 90-tooth ratchet, 120-position ratchet, or other very fine-toothed ratchet. But if you have coarser ratchets, such as with 60 teeth or even fewer, a gearless ratchet might be good to have around.

There’s only one gearless ratchet size (so far?) – 3/8″, and according to Sears’ specs it’s 10-1/4″ long. It has a full polish finish, which Sears and Allen say is for professional appearance. 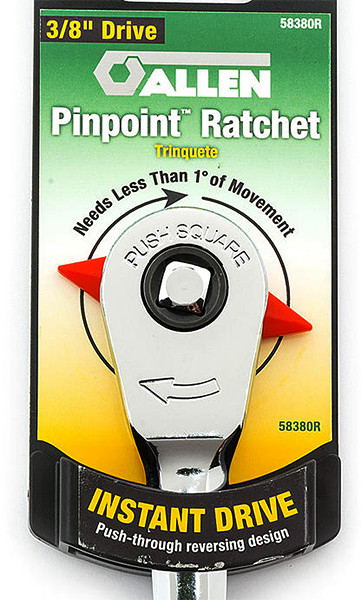 Over at Sears, this is listed as a Craftsman ratchet, but the imagery shows Allen branding, both on the handle and packaging. My guess is that the gearless ratchets are so new that the Sears product photographer hasn’t even gotten one yet, so they used the Allen Pinpoint ratchet instead.

Update: This is an Allen product. Someone at Sears screwed up and labeled it as Craftsman.

My experience with Kobalt’s Direct Drive gearless ratchet has been positive, although I don’t keep one in my main toolbox. I anticipate that the Allen gearless ratchet works as well, or maybe better, but I still don’t like push-through reversing ratchet designs.

On the other hand, push-through ratchets are sometimes stronger than traditional reversible mechanisms, with the Wera Koloss 1/2″ ratchet ($102 via Amazon) being a great example. Perhaps that’s Allen’s motivation for designing their gearless ratchet in this way.