ToolGuyd > Editorial > Fall 2019 Observations About Amazon and Lowe’s Craftsman Tool Advertising
If you buy something through our links, ToolGuyd might earn an affiliate commission. 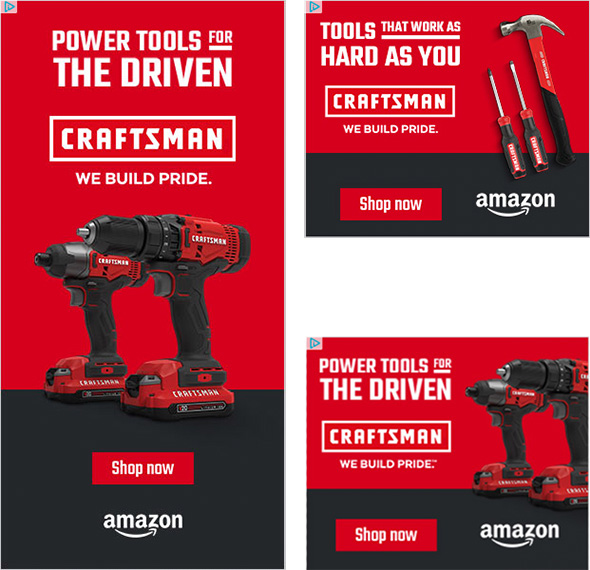 Amazon’s Craftsman tool banner advertisements, as shown above, have been following me around the web, on my desktop, laptop, and phone. To me, it seems that Amazon is very heavily advertising that they now carry Craftsman tools. There are also ads on Amazon’s shopping site.

Presumably, I’m seeing these ads because of my tool-related online browsing behaviors. Still, the high frequency at which I’ve been seeing these Amazon Craftsman tool ads has become quite noticeable.

Amazon now has their Craftsman store-in-a-store section now, and with a broader range of categories than a couple of months ago. Back in April, we spotted many new Craftsman tool listings, and it seems that most of those tools are now shipping. I would also imagine that Amazon is nearly ready for the Q4 and 2019 winter holiday shopping season.

Meanwhile, Lowe’s has worked to revamp many of their stores with very prominent Craftsman tool displays. Lowe’s tool section used to be very blue, the color of their Kobalt brand, and now it is very red.

In previous years, I’ve seen and heard a lot of Lowe’s Kobalt tool advertisements on TV and the radio, usually around the winter holiday shopping season and Father’s Day. If I recall correctly, there were some Craftsman commercials last year. So, what’s going to happen this November?

At this time, there aren’t many places to buy new Stanley Black & Decker-era Craftsman tools. Here is their current list of USA distributors:

I don’t recall seeing Amazon advertise so heavily for other tool brands, which is why these Craftsman ads caught my attention. Stanley Black & Decker is positioned to grow their Craftsman brand offerings over the next few years, and with the strength that the Craftsman brand carries, Amazon might be striving to be known as the source for Craftsman tools. Or, I’d say that’s at least a strategy they should be adopting.

Lowe’s investment into revamping their stores could not have been a small sum, given how much work was done, and so I would expect to see more prominent advertising from them.

Could Amazon be trying to indoctrinate customers with the idea that they are the new Craftsman tools source, through visibility and repetition?

It’s going to be very interesting to see how Amazon and Lowe’s compete with each other for Craftsman customers’ business. Right now, Amazon is vying for my attention (as a consumer) via very many banner ads online, and Lowe’s has their highly visible in-store displays.

It will also be interesting to see how warranty claims are handled. Craftsman says:

It remains to be seen how this will work with online purchases from Amazon.

Would Amazon be promoting their Craftsman tools availability so heavily if Lowe’s wasn’t such a big partner for the brand?

Although it seems to me that Amazon is aiming to compete with Lowe’s, that might not be the case. Maybe I’m reading into things too deeply. However, when has Amazon made this much of a fuss over a tool brand? For example, you can now buy Ego tools at Amazon, but I don’t recall seeing any advertising about it.

If you were planning to purchase any Craftsman tools, would you be more inclined to order from Amazon or from Lowe’s?