ToolGuyd > Editorial > Amazon Same-Day Shipping – I Love it!
If you buy something through our links, ToolGuyd might earn an affiliate commission. 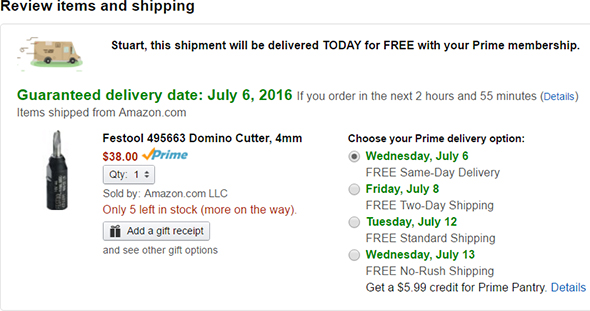 I finally have a few projects to push a Festool Domino joinery machine through, with one major project involving a lot of 1/2″ plywood drawers. 4 mm Domino tenons are the best option for that, which means I’ll need a 4 mm cutter.

There are a few Festool dealers around here, but by “around here,” I mean that the closest one is around 20 minutes away. This is something they probably don’t carry, and I’m not in the mood to chase down one cutter bit at the other Festool dealers in a 50 mile radius.

Amazon has what I need, and I braced myself to wait 2 days, or to pay extra to get it tomorrow.

I know some non-Prime members are highly critical of the paid expedited shipping service, which also comes with free streaming perks and early access to Lightning Deals on occasion. But for me, the annual Prime membership fee has paid for itself many times now. It’s an expense I have never regretted.

“Prime Day” is coming soon – July 12th – where there will be deals exclusive for Amazon Prime subscribers. That’s a good reason to give the service a free trial. Last year’s Prime Day deals sucked. But that’s not why I’m a Prime member. I’m a Prime member for the 2-day shipping on most of what I buy from there, and the other conveniences like same-day delivery on random things like Festool Domino cutters.

There have been times when my “guaranteed” delivery dates were missed. This doesn’t happen often though, at least not any more often than other retailers’ shipping targets have been missed.