ToolGuyd > DealGuyd > Random Reminder: Saturday is “Arduino Day” – Discounts Abound!
If you buy something through our links, ToolGuyd might earn an affiliate commission. 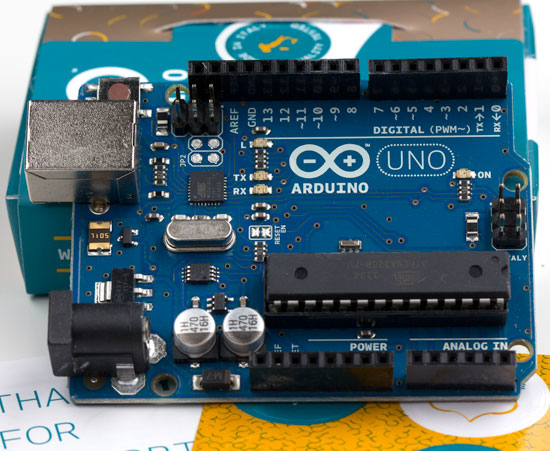 After I posted an introduction to electronic components, a couple of readers commented about their interest in the Arduino programmable microcontroller platform.

Arduino is an inexpensive way to build custom programmable circuits.

Arduino is a tool for making computers that can sense and control more of the physical world than your desktop computer. It’s an open-source physical computing platform based on a simple microcontroller board, and a development environment for writing software for the board.

For a longer intro, check out Arduino’s introduction page.

You can typically get started for as low as $20-$30. That’s how much a full-sized Arduino UNO will cost you. But there are many other models, and since Arduino is an open source platform, there are quite a few adaptations and varied designs by other board makers.

Sparkfun – one of my favorite places to buy Arduino boards and random electronics and robotics tidbits, has released details about their upcoming Arduino Day sale.

Sparkfun’s promo looks to be quite good. Last year I bought quite a few of their Redboards – Sparkfun’s self-branded and manufactured Arduino-compatible boards – and might do the same this year if I have a chance.

This year, they’re selling Arduino UNO boards (highly recommended for beginners) for $20. Regularly priced, the SMD version is typically $30, the DIP-packaged one is $25. Right now, it’s $26 on Amazon.

It took a while for Sparkfun’s production to be able to fulfill sales orders last year, and this year’s promo prices are valid while supplies last. Some aren’t in stock right now, but will be in stock Saturday for the sale.

Arduino’s international store will also be running a 10% discount.

Pololu has already announced their weekend-long Arduino Day sale as well. They’re discounting their Arduino-compatible A-Star microcontrollers and shields, and a couple of other things, by 30% to 50%. If you don’t know which to buy, start off with the A-Star 32U4 Prime SV, which is their new Arduino-compatible board.

Know of another deal worth mentioning? Please let us know!

My Journey to an Organized Workshop with Modular Tool Cabinets: Part 1, Design