ToolGuyd > Hand Tools > Screwdrivers > Ball Hex Key Set Recommendations, from Budget to Best
If you buy something through our links, ToolGuyd might earn an affiliate commission.

Chances are, you’ve used hex keys – or Allen wrenches – before. Have you ever used ball hex keys? Ball end hex key sets offer the best of both worlds – a ball hex end on the long arm, and a straight hex end on the short side.

We’ve talked about the benefits of ball end hex drivers before. Basically, the ball end allows for off-axis engagement of a fastener. With a straight hex driver or end, you don’t have much flexibility.

The ball end allows you to approach and engage a fastener at a slight angle, the straight end can handle greater torque, and with a far lower risk of damage to the tool or fastener.

If I had to buy a new hex key set right now, which would I buy?

(All of the sets mentioned here come with both inch and metric sizes. All stated prices are as of the time of this posting.) 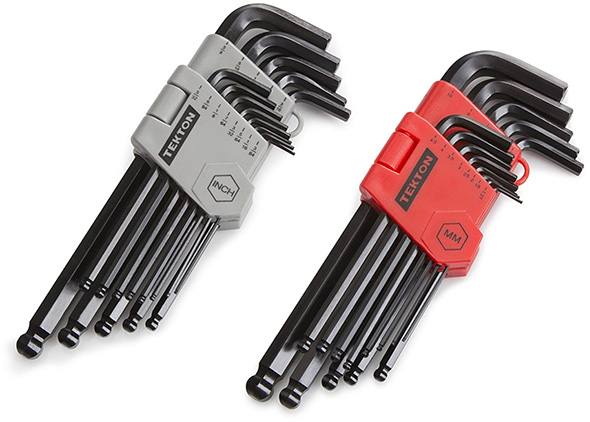 I’ve used cheap hex keys before, and the world didn’t stop spinning. Still, for more than occasional use, or for important tasks, I’d seek out a “brand name” tool.

Tekton’s set is about as inexpensive as things can get. The 26 piece set comes out to less than 50 cents per set.

I don’t believe I’ve tried Tekton hex tools yet, but I purchased an assortment of their tools a few years ago, and I liked what I saw. They’ve also sent samplings since then, and I’ve been very impressed with those tool.

Tekton has earned a good reputation for decent quality affordable tools, and I have heard good things about their customer service too.

For a budget-friendly set, I’d trust Tekton to get things right.

Very Good: Bondhus (Made in USA) 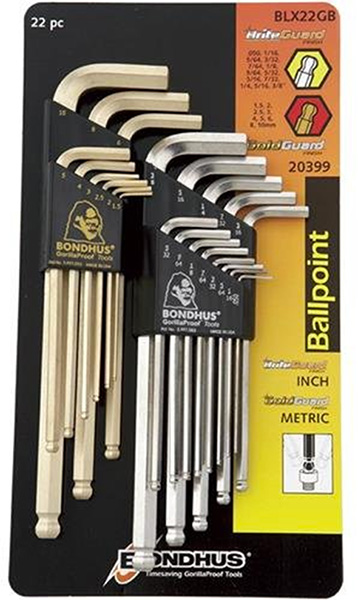 My first experience with Bondhus tools was with their ball end hex screwdrivers. So when it came time for me to buy a new set of metric hex keys, I gave them a shot. That was 11.5 years ago, when I went with a 1.5mm to 6mm set with bright finish.

Don’t let the “good” description throw you off. Bondhus hex keys and hex tools are very well built. They might be the last hex tools you ever need.

In addition to great quality and reasonable pricing, they’re made in the USA.

I like the BriteGuard and GoldGuard finish drivers for hex keys, as they’re easier to clean and feel better in-hand. But I have no qualms about using the black ProGuard finish hex keys either – I have a set of those too. 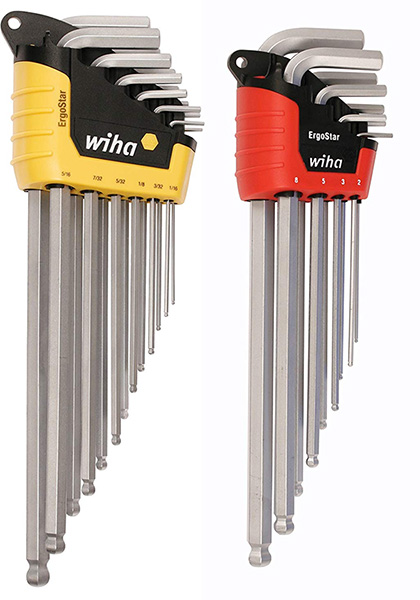 I have two sets of Wiha MagicRing hex key sets. Would I get MagicRing again? Yes, or at least maybe, for some things. But for general use? I think these non-screw-retaining versions would serve me better.

Aside from some difficulty I once had when accessing socket head screws in really right spaces at a steep angle, my Wiha hex keys have been great.

There were a few times when I pushed my Wiha hex keys to what should have beyond their limits, but they never gave up.

I haven’t taken micrometer measurements or anything like that, but I would think the Wiha hex tips to be a little more precise than the other hex key sets mentioned so far. 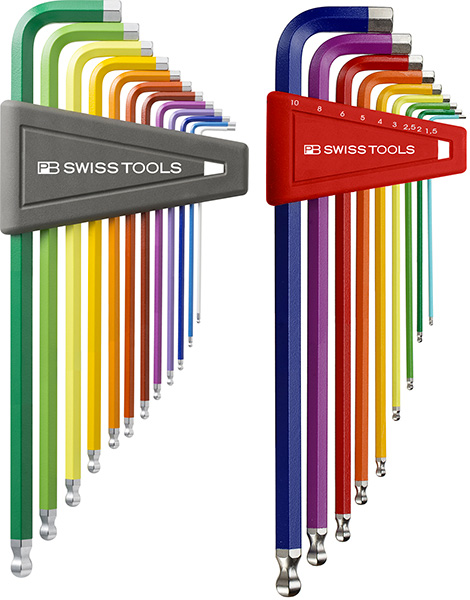 PB Swiss Tools aren’t for those with small budgets, medium budgets, or even what you might think is a sizable budget.

I bought my first PB Swiss Tools hex keys from Amazon, over the course of several months, back when they dramatically discounted PB Swiss products. A set was too pricey, so I watched individual listings and put together a small set of low-profile metric hex keys. 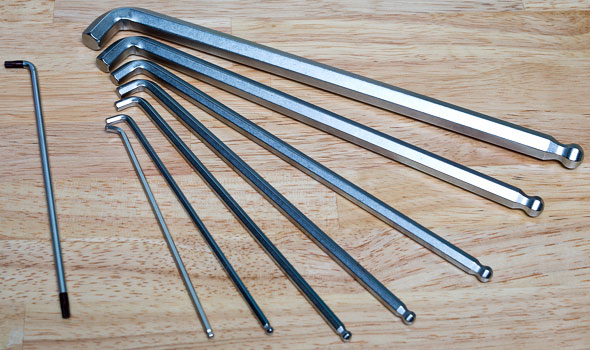 This is them – my low-profile PB Swiss metric problem-solvers.

A few years later, I finally bought my first set. And then another. Those two sets were a rainbow-colored set of inch-sized ball hex keys at introductory pricing, and a smaller set of metric hex keys, also color-coded.

Since then, I ordered a second set of inch hex keys.

If you wait until Black Friday or Cyber Monday, they’re still expensive, but a little less so. That “once a year” sale pricing business can really lead one to throw caution and budgetary considerations to the wind.

I often work with a ton of hex fasteners (dozens, sometimes hundreds), and by hand. For a small adjustment or two, or a small project, the choice of hex keys isn’t crucial. But for bigger projects, PB Swiss’s exceptionally good fitment can make things easier.

I don’t really need these tools. But they are a pleasure to use. Can I tell these apart in a blind test? I’d bet I could.

I have yet to have the ball hex tip slip within a fastener, something that has happened with other ball hex tools.

When I have trouble with other hex tools slipping in a shallow fastener, such as when using a straight hex tip in a slightly rounded or damaged button socket head screw, these are the tools that’ll save the day.

A 21pc set that includes color-coded inch and metric long ball hex keys will hurt your wallet to the tune of $166.

So Which to Buy?

If you need a hex key set to fill a hole in your tool box, go with Tekton. I’m sure they’re fine for occasional use, even regular use.

If you want to be pushed in one direction, I’d say go Bondhus. They’re very good, and won’t drain your tool budget too much. And as mentioned, they’re made in the USA.

Splurge on the Wiha if you’ve got a gift card burning a hole in your pocket or if you think you might need higher precision fitment.

If you’ve had your eyes on PB Swiss, you’ll LOVE them, you just won’t love paying for them out of your own pocket. If you’re not sure why you might need tools of that caliber, you can probably get by with something else.

Actually, if you have $150+ to spend and aren’t sure whether to buy PB Swiss, you could pick up a whole lot of other hex tools that might serve you better, such as a set of ball end hex keys, T-handle drivers, screwdriver-handled ball end drivers, and even precision drivers.

What makes a better hex tool? Well, I’ve broken hex keys before, but never Bondhus, Wiha, or PB Swiss, at least not yet. They’re hardened, but also a little springy when needed. They also fit better, which is important when working with smaller sizes that cannot tolerate a lot of slop, but also larger sizes which might require high torque.

There are many other brands that are just as recommendable. What’s your pick?

Also Read: These 16 Hex Key and Driver Options are Anything But Ordinary