ToolGuyd > CNC Machines > Bantam Desktop CNC Mill – Fresh Thoughts (Hands-Off)
If you buy something through our links, ToolGuyd might earn an affiliate commission. 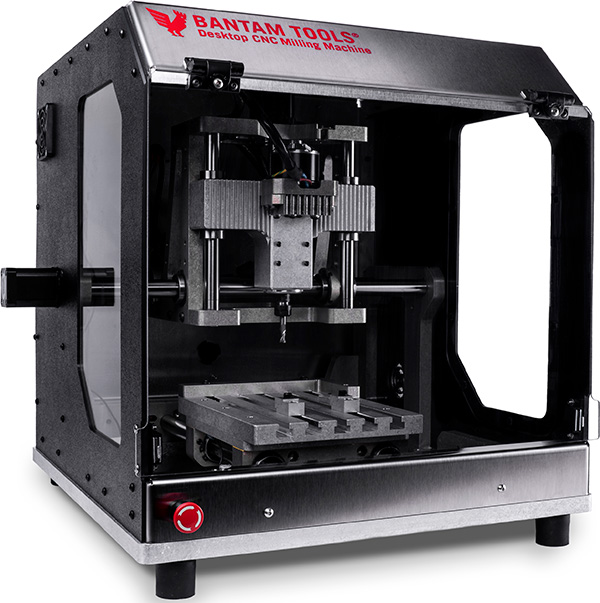 Earlier this month, I posted about how Bantam Tools is coming out with a new desktop CNC milling machine.

Bantam is now hailing their new product as the best affordable CNC machine (via ads on Google), and I must admit, it does have some appeal.

I’m not a fan of the high price, or that some features require an added paid subscription.

Their marketing hasn’t really done much to make the machine more compelling over the few weeks since the new machine was announced, but maybe the COVID-19 pandemic is limiting things.

I want to see more case studies, more examples of what it can do, and more “showing” than “telling.”

The idea of a “tell your friends, make money” referral program also seems odd for what’s supposed to be a professional tool. But, they’re not very in-your-face about it and so I suppose it’s okay.

Since its announcement, I have not taken any closer look at the new Bantam Tools desktop CNC milling machine, but I have researched some of their competition and also much higher-priced solutions. I have also thought about the motivation and direction of the company.

I have been thinking about the pricing quite a bit.

When buying a professional machining center, some manufacturers will nickle and dime you until the final price is so much higher than the base. This is true for a lot of commercial products.

I recently ordered an ergonomics computer chair, and the price shot up with every option. The same happens when you go car shopping.

I don’t like the idea of subscription model software, at least when it comes to something like tool-related hardware support. If you need to unlock features on professional test equipment, you pay a one-time fee.

Commercial and productivity software, and also some software that intertwines with hardware such as test equipment, sometime do require a subscription model rather than a one-time fee. Some companies offer you the option of paying a subscription or a lump sum for x-amount of free updates and included support.

Time will tell whether the new Bantam machine’s premium features will be worth the $199-per-year subscription fee. For commercial users, perhaps. But for individuals, inventors, or small businesses?

Bantam Tools’ PCB milling machine, their smaller and earlier electronics PCB-focused machine, is currently priced at $2499 for the basic model. The same machine with advanced accessory bundle is priced at $3299. These machines are currently out of stock, and their pages seem to have been buried a little on Bantam Tools’ website, perhaps temporarily or tied to being out of stock.

Years ago, when the Other Machine Co first released the Othermill, before Bre Pettis bought the company and changed the name, their cute little machine was priced at just $1500.

After talking to the brand representative at Maker Faire, I scribbled some notes onto the info card they were giving out. The machine was to be priced at $1500, feature replaceable parts, and would launch in January 2014. It would have an ER 11 collet and a vacuum adapter was said to be coming.

Fast forward to 2017, when Bre Pettis of Makerbot fame – or infamy depending on who you’re talking to – acquired the Other Machine Co, a press release at the time priced their Othermill Pro milling machine at $3100.

The price of the pro-version PCB milling machine had greatly increased from when it launched. Another article about the acquisition priced the basic machine at $2199.

While I was very strongly interested in the machine at first, I was never convinced it was a right fit for me, and once the PCB prototyping emphasis emerged, that was it for me. I followed some of the PCB milling machine’s progress over time, but lost personal interest – it was too high priced and I wasn’t convinced it could machine any metal parts outside of teeny tiny trinkets.

I also watched Makerbot 3D printing innovations over the years. Here is some of our past Makerbot coverage:

Makerbot was acquired by Stratasys in 2013. Fast forward to today, they have a couple of seemingly new machines aimed at educational and engineering customers. I say seemingly new because I stopped paying attention to the brand. The pricing of Makerbot 3D printers have greatly increased compared to those that made the brand popular with makers and hobbyists back in the day.

Bre Pettis left Makerbot prior to acquiring Other Machine Co.

How is Pettis steering Bantam Tools?, I wondered.

Yes, the price of Makerbot 3D printers greatly increased under Pettis’s leadership. But the pricing on this new Bantam desktop CNC milling machine doesn’t seem to be his influence.

If you want more machine, the price goes up. That’s true with 3D printers, CNC milling machines, and all manners of non-automated tools and equipment.

The $3600 promo price and $4000 full retail price on the Bantam Tools desktop milling machine does not seem out of line with how the PCB mill is priced, and the former Othermill increased in price from when it launched and before Pettis acquired the company.

After my post about the newly launching Bantam Tools desktop CNC milling machine, I received an email from what I could only describe as a competitor.

I won’t copy the entire email here, but here’s the start of it:

I came across a guide you did for the Bantam Desktop machines and we would like to see what kind of commission deal we can work out for a similar review.

built like a true floor model CNC with cast tables, bases and columns, along with durable steel enclosures.

We’re looking to grow our hobbyist and manufacturing market on top of our already growing educational market.

I took a look at their $5500+ “turn key” CNC milling machine. They’re coming out with some accessories, and tout that the machines are manufactured in the USA.

But, despite a dramatic absence of clear imagery, I spotted some strong resemblances to imported milling machine components. I did some background research, and according to the internet community, this company converts a variant of off-the-shelf machines and builds enclosures for them. There is definitely a benefit to this approach.

Obviously they want to sell machines and make money, but the question is this – what are they going for? What is their goal?

Does Bre Pettis want to put a CNC machine in every home? Well, he can’t. Below a certain price level, you lose on power, accuracy, working volume, finish quality, and so forth. Is $4000 (after the introductory price) the best they can do? Doubtful.

Carbide 3D’s Nomad machine is less expensive. Inventables’ Carvey doesn’t seem to be sold online anymore (or at least I couldn’t find any current price or purchase links), but if I recall correctly it was priced in line with the $2500 Nomad.

There are other desktop machines on the market, with most being router-type setups equipped with woodworking router motors or spindles.

As I mentioned in the other post, I am especially interested in the desktop CNC market and have been watching developments for quite some time. Recent workshop cleanup activities turned up printouts for DIY CNC plans from 2009, when I thought there was a possibility I could build a small machine for myself, but ultimate the component costs pushed my plans back. It would be a decade before I could have a taste of hobbyist-grade CNC benchtop cutting.

The Bantam Tools desktop CNC machine is a potentially large market, but very few options are presently available. For serious machining, you need a very large machine capable of handling steel. A benchtop machine isn’t going to do that, or at least not one that weighs as little as the new Bantam machine.

Bantam says their new machine weighs 70 pounds, and it “doesn’t require an engine hoist to install.”

I’d like to buy a benchtop milling machine, and possibly a lathe. In addition to better machines costing more, they often require an investment and a large footprint, and that’s before any CNC conversion considerations. Personal CNC milling machines are even more expensive.

Benchtop CNC routers can be upgraded and tuned to handle aluminum, but there are a lot of limitations.

Meanwhile, the new Bantam desktop milling machine is said to specialize in cutting aluminum, and to me that does make it appealing. It’s not a “sure, you could cut aluminum (but not at the quality you might be looking for)” type of claim, but “we designed this for aluminum.”

Does it introduce a new standard for desktop CNC machines? In theory, I think it might provide a strong balance between size and capability, but that remains to be seen. They also look to offer to hold users’ hands a bit, which will be necessary for getting non-machinists to use it.

I bought a 3D printer a few years ago and sent it right back because the darned thing couldn’t even do the test print. Designers and other users won’t be drawn to this machine if it requires them to become an expert in its use before it can produce good results.

The main selling point so far is for engineers and designers to “prototype your product in-house” and to make it easier to iterate.

I think it might miss the mark on the type of machine I have been looking for over the years – a benchtop tool that can make functional parts out of aluminum and of sufficient size. For that I might need to budget the space and setup for a benchtop machine, no reasonably-priced small CNC seems to have come close. The benchtop manual mill one I have had my eye on costs much less than the new Bantam Tools desktop CNC, and that’s including a 3-axis DRO option and ballscrew conversion kit for potential CNC adaptation. But, it weighs 370 lbs and while it can work with 120V 20A circuits, variable speed motor drivers sometimes (often?) don’t work well with GFCIs. Such a machine might be an eventuality, but for larger parts.

For smaller parts and components, Bantam Tools’ new machine looks like it could be a dream for inventors, designers, or small companies.

Thinking of toolmakers specifically, smaller outfits usually send out for their machining needs. Larger companies might have in-house fabrication, but are designers and engineers able to disrupt production workflow to test different design ideas? Larger brands have equipment dedicated to prototyping needs, and skilled workers to operate them.

If this machine is well-designed, easy to use, and capable in its machining, it could very well gain traction. Personally, I’d like to see them offer more options – the personal CNC milling machine space can certainly use more competition and innovation!

Hopefully Bantam also has a roadmap of accessories planned out for the machine, time will tell. As an aside, I wonder if the subscription software model could be made more attractive by giving premium subscribers a discount on future add-ons or accessories, or savings on tooling or sample materials. Just a thought.