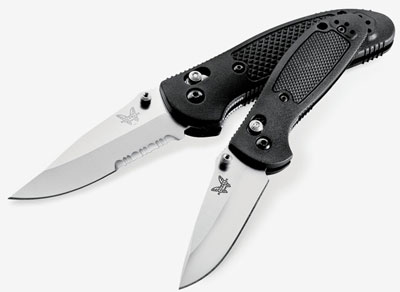 In response to our post on knife and multi-tool gift ideas, Maikeru asked about a pocket knife that features one-handed opening and closing. We then wrote a quick post recommending Benchmade’s Griptilian and mini-Griptilian knives with Axis locks.

Maikeru ended up choosing a Benchmade Griptilian for his needs and posted the following detailed hands-on review:

So I actually found the full-sized Griptilian 551 at a decent price (cheaper than what Amazon was selling that specific version for) in a physical store no less. This was purchased on Wednesday. I needed it with a thumbstud as ring openers are great barehanded, but I’ve had some trouble with them while wearing gloves (both work gloves as well as warmth gloves).

As I’d be carrying this as an E.D.C. (E.very D.ay C.arry) I didn’t want it to look scary and I didn’t want it to attract immediate attention since the last thing that you want to happen to you when you need to do something (like make a cup out of a bottled water bottle or cut the twine off of a package) in public is to have everyone around you freak out. If I had been considering this as a knife for mainly camping, then I’d have gone with a brighter colour in case I dropped it while out rock scrambling. I thus decided on the least military looking, and least eye catching combination of colours that I could find. So that meant finding one with a drop point and non-coated edge (they offer it in BK-1, the black anti-reflective coating) with a either black or sand coloured handles. So I got it in a rather generic build of drop-point, combination plain and serrated blade (I might need to cut rope/twine/grip tape/etc and the serrations are just better at that), with thumb stud, and black handles.

Here are the specs that I pulled from the site:

When picking up the knife I noticed quite a few things about its weight, that it’s A) fairly light (though I’m used to carrying around my multitool) B) that when open the knife is balanced a hair behind the AXIS lock slide. Thus this makes this knife very easy to carry without feeling like it’s a burden, but just heavy enough to remind you that it’s there as well as being very easy to hold without the knife feeling too nose or handle heavy.

The knife’s name is highly appropriate as everywhere you could possibly want to grip the knife there’s either a chequered or ridged surface. You can even hold the knife in a scalpel grip (handy for doing some fine detail work if you’re carving wood or cutting paper) and still be in contact with a ridged surface. I can imagine that I’ll still be able to hold on to this knife when my hands are cold and/or wet or slightly coated with a little road grease (although if possible I’d prefer them not to be covered in water or coated with road grease just in case). In fact the interesting thing is that even though the clip is found on other knives made by Benchmade, the clip is built in a manner that doesn’t seem to adversely effect my grip—in fact during opening the edge of it provides my fingertips a very nice place to hold on to while the blade swings out (if you’re left handed you’ll have to flip the clip to the other side of the knife for the same sort of benefit).

However, the downside of the chequering on the sides of the body is that with the clip being rather new and tenacious, once it’s clipped to the edge of my pocket it’s a little hard to pull out. I do expect this to stop being a problem after carrying this for a while as the clip is likely to bend a little outwards.

As for what the handle is made out of, I did a little looking up on Wikipedia about the material and it says that Valox is the trademarked name for a variety of polybutylene terephthalate. Apparently it’s got some glass in it for extra strength (I suppose that means it’s like various glass impregnated plastics), resistant to solvents, fairly well insulated against electricity, fairly heat resistant, and apparently reasonably resistant to mechanical force damage. That kind of makes the handle sound mostly indestructible in some fairly extreme conditions, but only time and usage will tell.

The knife can be opened nicely in a very controlled manner if one keeps their thumb on the thumbstud and pushes it all the way open—when done like this the click of the AXIS lock is quiet, but reassuring and thus perfect for when you don’t want to scare away wildlife or people . One can also pull back on the AXIS lock slide and turn over their hand to quickly deploy the blade (the same can be done for closing the blade). However, another thing that can be done is a combination of the two; give the thumbstud a bit of a push while turning your hand over and the knife deploys about as quickly as pulling back the AXIS lock slide and flicking, but with the added advantage of being locked when it’s in place.

The interesting thing is that the AXIS lock slide sits a little further back than it probably should when the knife is in the open and locked position. This doesn’t seem to effect the strength of the lock. What I’m wondering is if this is by design so that as the knife’s mechanisms wear down the lock always stays tight without play or even minor rattling. I’ll have to take a look at a few more new ones and compare them to the store’s demo unit.

Admittedly, I haven’t put the knife fully through its paces with anything adventurous or strenuous, but I did do the arm hair shaving test and it seems to shave them pretty nicely. The blade seems all around sharp from the plain edge all the way through the serrations. I’ve also done a practice cut in the center of a grocery receipt and managed to cut a very clean slot about 2mm x 10mm in size without any visible tearing, so the blade can be used as a fine decent paper cutting knife when at factory sharpness.

In the long term I may tack on a follow up comment to this post. I’ll then be able to remark about how the blade holds up against corrosion, how quickly the blade dulls, how the mechanisms hold up, how the handle wears, and other age/use related concerns. In the case of sharpening the knife I may be able to shed some light upon what angle the factory sharpening is at and how easy it is to put an edge on it with basic manual sharpening tools (the company doesn’t specify the sharpening angle, but various knife aficionado forums keep saying that the angle is either 30° or 40° inclusive or somewhere in between).

~Ed. Note: Benchmade offers the Griptilian with either thumb-studs as shown above or holes as shown below. 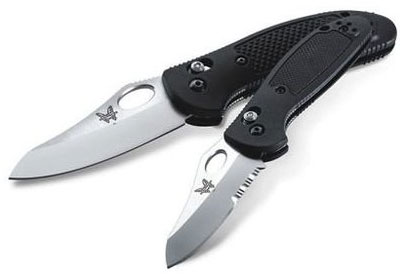 Thanks again, Maikeru for the in-depth review!