ToolGuyd > Hand Tools > EDC, Pocket, & Multitools > Benchmade Mini Griptilian Knife Review – a Near Perfect EDC Folder
If you buy something through our links, ToolGuyd might earn an affiliate commission.

When we asked readers about which knives they carry, a couple of brands and models stood out. One of them – the USA-made Benchmade mini Griptilian.

As the name suggests, Benchmade also makes a line of Griptilian folding pocket knives that are larger than the mini version. I haven’t tried the Griptilian yet, but I have owned a Benchmade blue mini Griptilian (555HG series) for a couple of years now.

When I bought my mini Griptilian back in 2010 nearly 5 years ago, I had searched quite a few forums and saw that the mini version was more strongly recommended as an everyday knife. It’s smaller, without being too small, and large enough to be quite practical.

The mini Griptilian isn’t a very flashy knife. And for around $90, sometimes for less, I wouldn’t expect it to be.

Benchmade’s mini Griptilian is available in several styles and with different handle color options. You get your choice of a thumb stud or thumb hole for blade deployment, and a plain edge or partially serrated blade. Basic handle color options include blue, yellow, pink, and black.

The blade shape is a little different on the thumb hole and thumb stud versions.

There are a couple of premium versions of the knife, such as with coated blades. You can also build a custom mini Griptilian on Benchmade’s site, where you can customize almost every aspect of the knife, but it’ll cost you well over $100 to do so.

Check out some of our other knife reviews here! 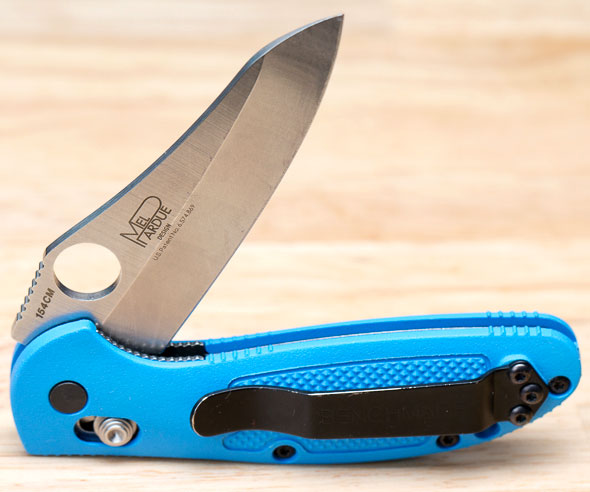 The mini Griptilian is a very unassuming knife. It’s designed in collaboration by Mel Pardue, who Benchmade says designs knives that offer great utility to the everyday knife user while at the same time presenting an upscale distinction.

If not for its stellar reputation, I might never have ordered one. This knife certainly does not have the same instant appeal as other knives I own, such as the Spyderco Techno I recently reviewed.

But it would be a mistake to pass over this knife. It’s lightweight, easy to use, relatively slim and comfortably pocketable, and quite capable. 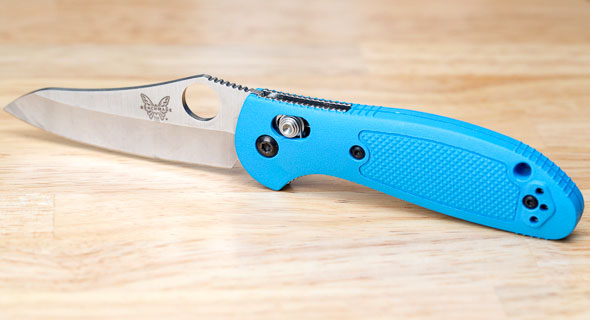 The mini Griptilian is a very comfortable knife, despite its simplicity. Its resin handle looks a little cheap, but it’s comfortable, and that’s what matters.

It opens via an ambidextrous thumb hole. The mini Griptilian is also available with a thumb stud, but after some debate I thought the thumb hole would better suit my preferences. I’m still not sure if I’m right about that, but I have yet to regret my purchase choice.

The knife can be opened slowly with a rotation of your thumb, or quickly with a flick. I generally open it casually. No need to slam the knife into the blade stop unnecessarily.

I have seen some Benchmade users hold down on the Axis lock spring and flick the knife open, but I don’t see a reason to do this, as the mini Griptilian opens speedily enough with my thumb. Using the thumb hole is probably also the safer way to deploy the blade. 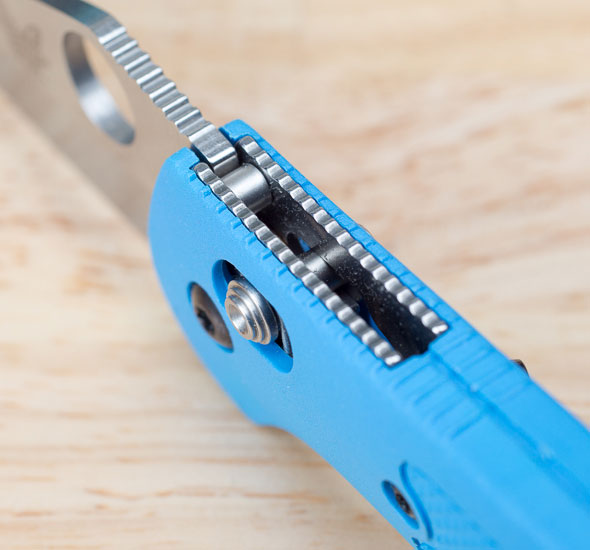 Benchmade’s AXIS lock is unlike any other folding knife locking mechanism I have seen before, and it works well. It’s also ambidextrous, and consists of a small spring-loaded metal stud that you pull back on to release the blade before closing.

There’s jimping on back of the blade, and around the top of the handle near the AXIS lock, giving the knife a nice sized gripping area for your thumb. 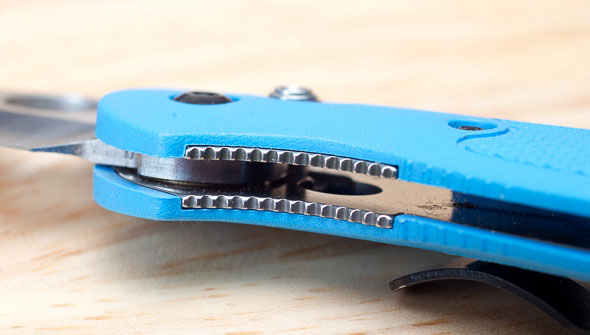 You also get a gently grooved finger curve at the bottom of the handle. Don’t mistake this for a liner lock it’s not. These steel liners offer some structural reinforcement and strength within the lightweight Valox handle scales.

It’s quite common these days for a knife to open smoothly and fluidly, but rarer for a knife to close as quickly or easily. Sometime after I received my new mini Griptilian, I put together a quick video showing how easily the blade closes.

Yes, the video is a little goofy, but the mini Griptilian still remains one of the few knives I am able to closed with one hand. This way, I can hold onto what needs to be cut or pierced, open the knife, use the knife, close the knife, and put it back in my pocket, all without having to release whatever my other hand is holding.

Even if my other hand is free, it’s still great to be able to open, use, and close a pocket knife all with one hand. 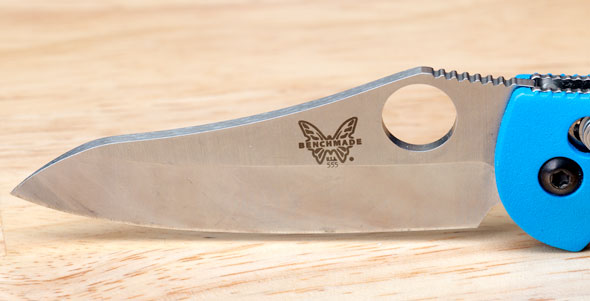 Benchmade offers a couple of different blade options, including a pointed tanto blade on custom mini Griptilians, and a partially serrated blade on some regular models.

I opted for the plain edge blade, as plain edges are easier to sharpen and often better suited for general purpose use.

The blade is hollow ground, which means the grind is slightly curved inwards. This makes the cutting edge thin and sharp. The shape and grind of the blade allows for good control of the tip for higher precision cutting tasks, at least from what I have found.

Benchmade offers the mini Griptilian with a 154CM stainless steel blade. Alloy aficionados might consider this to be a common alloy, but it’s a tried-and-true American-made steel that offers a good balance between corrosion resistance, toughness, and edge retention.

The mini Griptilian is A-OK as a workhorse – it’s a big step up from lesser stainless steels and can handle heavier duty use.

No, 154CM is not as fancy as Elmax and other premium powder metallurgy alloys (which really are fantastic, by the way), but you’re also not paying premium alloy knife prices for a mini Grip.

There are two ways to carry the mini Griptilian. Each knife comes with a plain and large pocket clip,  which can be moved to the other side of the knife if desired, and there is also a lanyard hole.

I just use the clip. It’s kind of bulky, so one day I might just knot up a piece of paracord and use the lanyard hole. 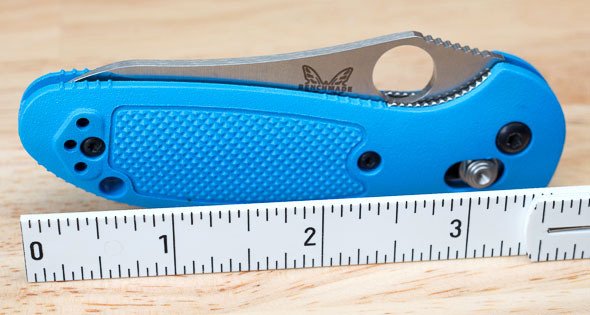 Don’t be fooled by the name. The mini Griptilian is anything but tiny. If you ask me, it’s the perfect size for EDC (everyday carry). Not too big, not too small.

It’s big enough to be practical, small enough so as to not draw stares if you need to use it in public. The bright colored handles help to give the mini Griptilian the same sort of public perception as a small Swiss Army Knife. Plus, the smaller size makes it easier and more comfortable to carry.

I bought mine from BladeHQ back in 2010, and recommend them, but there are plenty of other authorized dealers. Amazon also carries the mini Grip, but right now it’s only through 3rd party sellers.

The mini Griptilians with thumb studs feature a modified drop point blade, which is a little different from the modified sheepsfoot shape of the knife reviewed here. Both have subtle pros and cons. If you ask me, base your purchasing decision on whether you want a thumb hole or thumb stud for opening the knife.

The Benchmade mini Griptilian is a simple knife, but not unappealingly so. It’s a solid performer, and its reinforced resin handle makes it a lightweight and comfortable knife to carry.

This is a fantastic folding pocket knife, and a near-perfect EDC knife at that. Why only near-perfect? The mini Griptilian price has increased in recent years, without any obvious changes to the design. I also wish that the pocket clip was designed for deep-carry, as I’ve become accustomed to this.

If you’re looking for a good EDC knife that’s made in the USA, the Benchmade mini Griptilian is a great choice. It’s one of my favorite knives to carry and use, and I definitely recommend it.

Do you think the mini Griptilian’s ~3-inch blade is too small? If you’re interested in a discussion of the larger Griptilian, a reader sent in a review of it shortly after buying one. But if you ask me, the mini Griptilian reviewed here is going to be a better starting point for most casual users, unless you know you want or need a folding knife with a ~3.5-inch blade.