ToolGuyd > CNC Machines > Benchtop CNC Router Basics
If you buy something through our links, ToolGuyd might earn an affiliate commission.

CNC routers can unlock a world of possibilities when it comes to the breadth of shapes and objects they enable you to build. It might seem like a daunting purchase, but in reality these machines are not as complicated as you’d think.

In this post we’ll discuss the basic workings of a CNC router, and how I created the lettering for my EcoPoxy plaque project.

What is a CNC Router?

CNC standards for Computer Numerical Control, which is a fancy way of saying a computer is used to precisely control a machine as it follows a set of instructions to fabricate different parts and objects.

If you are looking at a CNC router for home use, which is what I will be focus on in this post, the CNC components moves a woodworking router along three axes to remove material from a block or sheet of wood, plastic, or metal.

It’s basically the reverse of a 3D printer, which starts with nothing and adds material to create the object. Whereas 3D printers build up work with additive processes, CNC routers and other similar types of machinery remove materials in a subtractive process, reducing the volume of your starting material.

CNC routers range in size, with smaller machines having a benchtop footprint, to larger floor-standing machines that can fit an entire sheet of 4′ x 8′ plywood, MDF, or other sheet goods.

How Does a CNC Router Work? 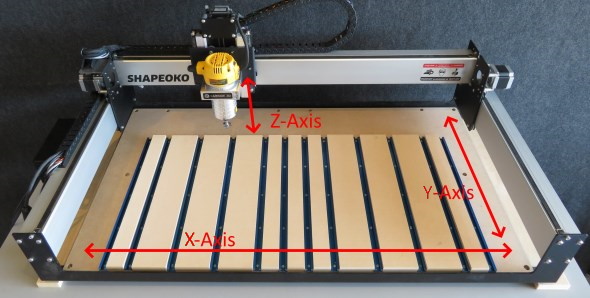 A basic CNC router allows the motor or spindle (a specialized type of upgraded motor) to be moved in the X-Axis (left to right), Y-Axis (front to back) and Z-Axis (up and down). More expensive commercial CNC machines allow movement in additional directions, allowing even more complicated objects to be fabricated.

For example, this machine can only move the router head up and down, so it always enters at 90 degrees to the material. More complex CNC mills and machining equipment can rotate the head or work as well.

To achieve this movement, you have the gantry, which is the entire X-axis (the horizontal axis) that moves along the Y-axis. The Z-axis assembly is fixed to the X-axis carriage.

Thus, the router is raised up and down along the Z-axis for cutting depth adjustments, the entire Z-axis moves left and right along the X-axis, and the X-axis moves forward and back along the Y-axis.

CNC controllers can drive motion along all three axes simultaneously, allowing for fast adjustments that are impossible to do manually. Consider an Etch A Sketch. Do you remember turning one knob for horizontal movement and the other for vertical, with both turned at the same time creating a diagonal line with small steps if your hands were not perfectly in sync? It’s like that, but with much better precision.

The majority of DIY or hobby-grade CNC routers feature timing belts that are fixed along their axes, at least for x and y directions. More basic machines might use threaded rod, and more sophisticated machines might have acme lead screws or ballscrews.

In addition to timing belts being more economical, as well as simpler to adjust or replace, they make it much easier to scale up for larger machines.

Z-axis assemblies usually involve a much smaller range of motion and operate differently. On a hobby-grade machine, the router motor might be spring-balanced with a screw mechanism used to raise and lower it.

For the X and Y axes, stepper motors are attached to geared pulleys that move along the timing belts to get the router where it needs to be. The diagram above is an example of how this all works. You have a stepper motor (the blue square), mounted to the movable structure (either the gantry or Z-axis assembly). Ball bearing guides (green) keep the timing belt straight and flat, while another set of modified bearings (orange) act as wheels, allowing the assembly to glide over linear rail components.

The linear motion components (orange) support the weight of the axis assembly on a guide rail. Often these are v-groove ball bearings, constraining the motion of the axis.

As the stepper motor turns, the green pulley grips the red timing belt, thus progressing the entire assembly to the left or right.

This same principal is used to control the major directions of travel, allowing incremental movements along the x-y plane in steps of little as 0.001″ at a time!

Consider the motion of a train or roller coaster car. It’s the job of most of the wheels support the load of the structure, with a separate mechanism providing the drive power. 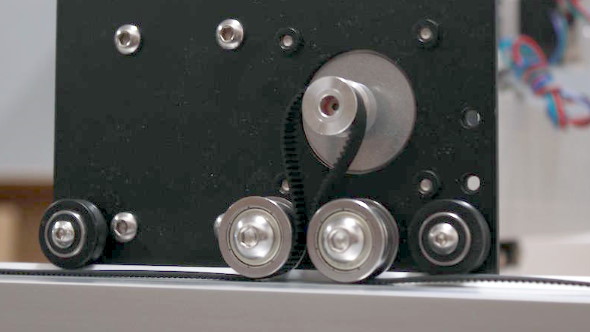 Here you can see an X-Axis assembly, with a timing belt threaded under the bearing guides and round the stepper motor. The belt must be properly tensioned during machine assembly and checked periodically to adjust for any stretching.

Most DIY CNC routers are equipped with interchangeable clamps that can work with popular off-the-shelf woodworking routers. There are accessories you can use to control the speed of the routers, if desired. More sophisticated setups might feature air-cooled or water-cooled spindles.

There is a variety of different CNC tooling you can install in your router to achieve the desired cut pattern or design. The image above shows four of the most common CNC router bits: a ball end mill for round-bottom cuts or carvings, a flat end mill for square cuts, a V-bit for angular cuts (often used for carving or engraving), and a surfacing bit to flatten spoilboards or workpieces.

There are many other parts to CNC machines, such as limit switches to prevent over-travel, probes for precisely setting workpiece height, and wasteboards, which are the table bed surface to which your workpieces can be secured. More premium machines might have emergency stop buttons, pendants for control away from your computer, stock enclosures, or other add-ons and accessories.

The typical workflow for a CNC project is as simple as:

Away from the computer, you must also:

Of course, in reality it does get more complicated but the additional steps are no different from steps you’d take when using any power tool, such as plugging in a shopvac, turning the router on, etc.

Depending on the CNC controller package, you can automate some of the router controls, such as using a relay to turn a router motor on and off.

With some machines you can also automate the Z-axis zeroing, which is usually done at the start of a run or whenever tooling is changed. 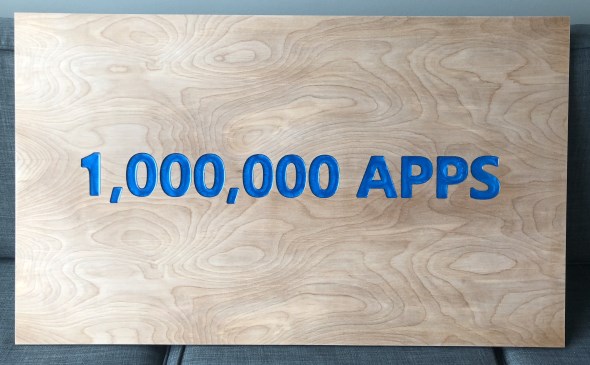 When I posted my review of EcoPoxy, I referenced a plaque I created. The lettering for this project was cut out using my Shapeoko 3 XL CNC.

This project is great example of how simple a CNC is to use.

Modeling Your Design or Part

The process starts by creating a design in a Computer Aided Design (CAD) application.

CAD software can be incredibly complex and powerful, such as Adobe’s Fusion 3D, which can be used to design something as sophisticated as a jet engine. In recent years, CNC router brands have started to package their own design software with their machines. For example, Carbide Motion is a free app that shipped with my Shapeoko. To create the letters, I simply selected the text editor, entered my text, and set the size and position. 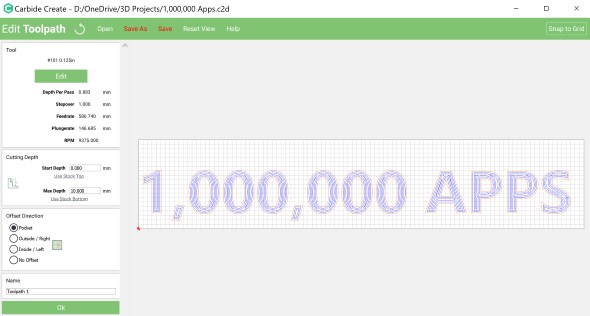 The next step is to add depth to the lettering. To do this, I clicked on the text, then on Toolpath, selected the CNC bit that I planned to use (a flat-cutting end mill in this case), set the cutting depth, and the type of cut. I used a pocket cut here because I wanted the entire inside of the lettering to be removed.

This software then automatically determines how many passes it will take to achieve the desired cut, with settings determined by your selection of material and end mill size. With software like this, speeds, feeds, and other such details are input for you, but you can usually override default settings if needed.

I like to think of this process being more about drawing in 2D and adding depth to it, and not about 3D modeling. In other words, you are simply taking a design that you draw on a computer and deciding how deep you are going to cut the design into the material.

Finally, you can check the design using a built-in simulator, which should help you catch any egregious mistakes or errors. Here, you’ll see a preview of your design and the steps the CNC will go through to create it.

In this screenshot image, the green coloring represents the movements the router will take as the selected end mill cuts out the lettering The red paths show when the router will move quickly between cutting steps to new positions.

It’s now just a matter of exporting the design into G-code, a set of instructions that can be loaded into the controller software. 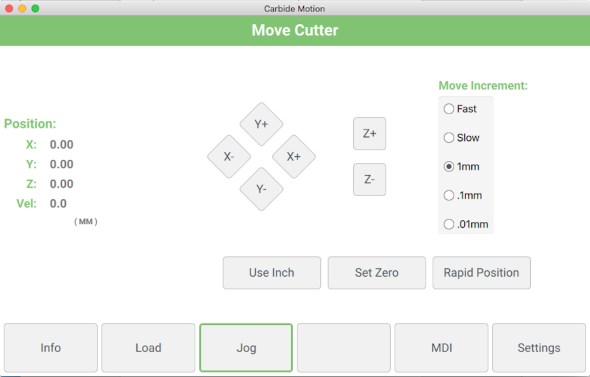 With the PC connected to the CNC machine, the design is loaded into the controller software. In this case I’m using Carbide Motion, which also ships with the Shapeoko 3.

Before running the job, we need to set the zero position of the router. This design has a start position that is set to the bottom left of the material, which is common. Using the controller software, the router is moved to the correct position over the material to be cut. The router head is then lowered until it is as close to the material as possible. In this case accuracy isn’t that critical, as ±0.1″ will not change the end result.

Common advice is to lower the Z-axis until it can trap a piece of paper slid between the end mill and the top of your work material. 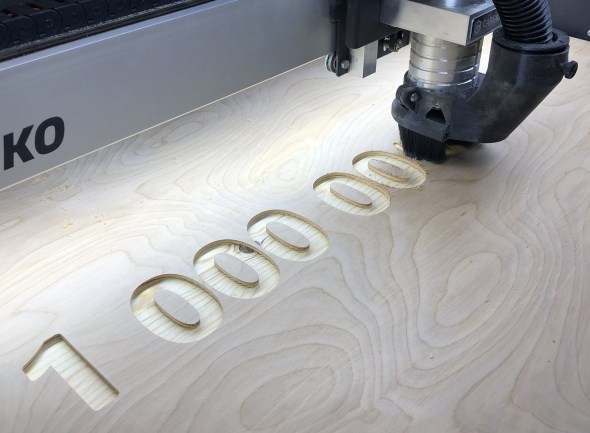 The final step is to put your protective gear on – safety glasses and hearing protection at the least – and start running the job. You can now sit back and relax whilst your design comes to life.

If you have a dust collection attachment, you’ll need to accommodate that in your setup process as well.

A completed design like this only takes 10 minutes to create, from start to finish. I have spent 20+ years drawing diagrams on computers and am delighted at how easily I can now knock out a design like this.

Given the size and depth of the cuts, it took ~40 minutes for the CNC to carve out the letters. One downside of a DIY CNC machine is that it needs to be supervised at all times. If something goes wrong, the program will continue to execute, so you need to be able to hit the stop button before things get out of control. A commercial machine will have more safeguards in place, requiring less supervision.

As you can see, a CNC router is a fairly straightforward piece of technology that is increasingly becoming a viable purchase for DIYers. It’s unlikely to ever have the same mainstream appeal as a 3D printer, primarily because they do create a lot of dust, but in the right environment they are an awesome addition to your toolbag!

I hope this helps demystify the world of CNC!