ToolGuyd > Hand Tools > Clamps > Bessey KliKlamp Ratcheting Clamp Review
If you buy something through our links, ToolGuyd might earn an affiliate commission. 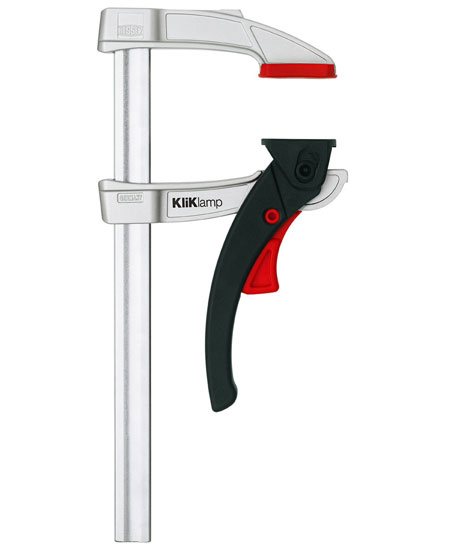 I first talked about the Bessey KliKlamp back in 2013. The day before that post, I ordered a pair of 8″ clamps for my own use.

Since then, I’ve used the clamps a bit, but I’ve been using them a lot more recently. I’m nearly ready to toss out my trigger clamps and buy a couple more of these.

I used to have a preference for Jorgensen gear clamps (reviewed here), but that preference has been diluted and even reversed in recent years. 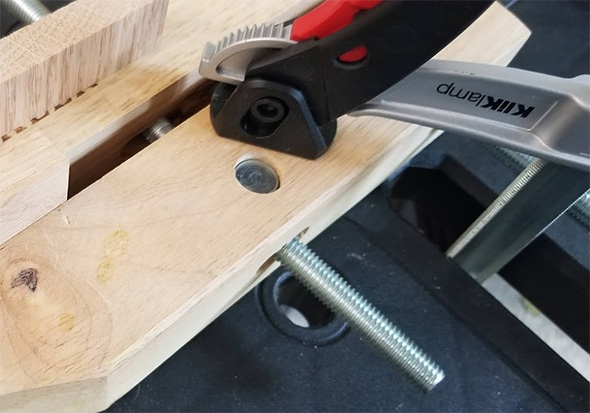 Through use, I learned that the Bessey KliKlamps are light, but that doesn’t make them light duty. Thus, my opinion of these clamps kept improving, to where my Jorgensens haven’t seen the light of day for a few months now.

That said, they do have a modest load rating of 260 lbs. But I found that this is sufficient for my needs. On paper, my Jorgensen clamps have higher load ratings. But in practice, I favor the light weight of the Bessey clamps, and the often smoother operation.

I definitely prefer both over trigger clamps, but the comparatively higher costs have kept me from getting many more of them. A 4-pack of Irwin 6″ quick clamps is priced at $20 during holiday seasons, while just one Bessey 8″ clamp is $18.

As shown in the not-too-great photo above, I like using these clamps with portable work tables especially, where the quick operation is especially helpful.

I bought them from Amazon. I remember initially thinking that the clamps felt too light, and I mentioned this in my Jorgensen gear clamp review. But so far, the Bessey clamps held up nicely, and they still have far greater clamping power than similarly sized squeeze-trigger bar clamps.

These clamps are also available in 4″ and 12″ sizes.

Is Home Depot Dumping Bessey Clamps? If So, What Will Take Their Place?