ToolGuyd > Power Tools > Cordless > Best Cordless Screwdriver: Dewalt vs. Milwaukee? (2020)
If you buy something through our links, ToolGuyd might earn an affiliate commission. 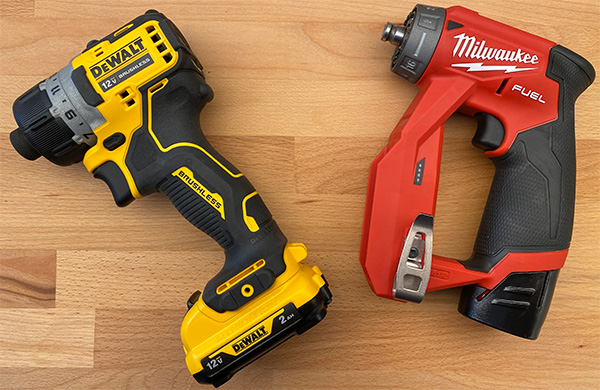 With the same image as shown above I wrote:

And the answer is… E) I really don’t know yet.

I’m sorry if you were expecting a definitive answer, but the truth is that I’m having a very difficult time deciding between these two excellent power tools.

I’ve been using both the Dewalt 12V Max Xtreme Subcompact cordless screwdriver and Milwaukee’s M12 Fuel “installation drill/driver” for quite some time, and you’d think there would be a clear winner by now.

The Dewalt is compact and features a traditional cordless screwdriver design, with variable speed switch, torque-control clutch, and forward/reverse switch.

Milwaukee’s M12 Fuel installation drill/driver is a multi-functional tool, with modular heads that you can swap back and forth for use in tight, obstructed, or tricky situations.

Here’s my thought dilemma, after using both tools for quite some time, sometimes rotating between them for potential insights:

I can’t pick a favorite. Well… yes I can, if I try hard enough. I suppose it’s more appropriate to say that I can’t determine which of these modern brushless cordless drills are better.

Despite this, I enjoy using the Dewalt screwdriver, and feel that it’s perfectly tuned for a wide variety of light to medium duty fastening needs, especially small fastener installation and assembly tasks.

Can the Milwaukee M12 Fuel cordless screwdriver do everything the Dewalt could do? Yes. Is the reverse also true? No.

For the sake of this discussion, I’m ignoring the price difference, where the Dewalt kit can be purchased for less than half the price of the Milwaukee kit.

The Milwaukee M12 Fuel installation drill/driver has gotten me out of some tight spots, where a standard drill or driver wouldn’t have fit and I would have had to resort to improvise with other tools.

But here’s the problem – I have grown attached to Dewalt’s cordless screwdriver, and even though I also enjoy using the Milwaukee M12 Fuel, it typically only comes out when it’s a problem solver or frustration eliminator.

I could use the Milwaukee drill/driver for everything, but I don’t think I would be as happy. I might try that next – using it exclusively to see if I get better used to it as my one-and-only cordless screwdriver.

So, which is better?

If you can only get one tool, and are eager to buy into the Milwaukee M12 cordless power tool platform, the M12 Fuel installation drill/driver is an excellent performer and problem-solver.

If you’re in interested in Dewalt’s 12V Max system, the Dewalt is an excellent model, and one I’ve gushed about before.

I will say that I like Dewalt’s clutch a bit better, but that’s also because my last experience with the M12 Fuel driver involved small screws and soft material where I stripped some holes. Prior to that, the clutch worked as intended, but the Dewalt’s has been a little more consistent for the things I’ve been using it on.

Quite frankly, I’m glad that I don’t have to make the choice – I received both for free, although I see myself buying a personal use copy in the future. I do own a Milwaukee M12 cordless screwdriver that I bought as part of a past Black Friday deal, but it hasn’t seen any use since the Dewalt Xtreme Subcompact and Milwaukee M12 Fuel installation driver both landed in my hands.

The Milwaukee’s electronic forward/reverse switch, which also has a power lock, will be a deal-breaker for some. Yes, it’s non-intuitive at first, and every time I pick it up after a long span between uses, but it doesn’t bother me as much as some potential users seem to worry about.

Which would you pick?

The Dewalt kit is a great performer at very aggressively low pricing, and the Milwaukee is a versatile problem-solver. Why can’t I choose between them?

Whoops, I Drop-Tested the Milwaukee M12 Fuel Surge This Weekend