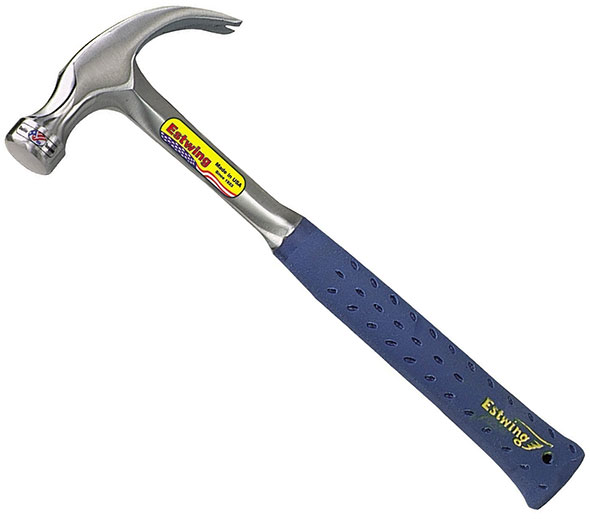 Andrew is putting together a new DIYer/homeowner tool kit and checked out my 12 essential tools for DIYers and homeowners post, but he hit a roadblock. Which hammer to buy?

That’s a great question, and one that has definitely tormented me in the past.

Hey Stuart, I was wondering if you could help me select a basic hammer to keep around the house. It won’t be used for any specific task, just for general use so a framing hammer seems to be too cumbersome and heavy for this task.

I know in your 12 Essential tools you mentioned a standard 16oz hammer should suffice but the bevy of options are a little daunting and I was hoping you could shed some clarity as well as a few possible recommendations on the subject. Thanks for the awesome website!

You have a lot of choices in the $20 and under range. Something like the Estwing E3-16C, which sells for about $21, is probably more than you need, but will last a very long time. I’ve got one, and it’s my most-used nail hammer.

Estwing’s rubber-gripped one-piece steel hammers are great choices, not just the 16oz size. I’ve got at least one Estwing ball pein hammer that I bought alongside a Vaughan for comparison purposes. I still haven’t determined which one I prefer more, but that’s a discussion for another time.

USA-made wood-handled claw hammers sell for $17 and up, which is why I think the Estwing steel-handled one is a great step-up for only a couple of dollars more.

If you don’t care about USA-made or wood vs. steel handle construction, and don’t need a fancy grip, something like the Stanley-51-616 could be a good choice. It’s 16 oz with a claw, and priced at just $6 on Amazon. It’s a little more expensive elsewhere.

The Stanley hammer is an “add-on” item on Amazon, and so you can only buy it as part of a $25+ order of items sold and shipped directly by Amazon. That’s how they’re able to offer free shipping, even for Prime members. 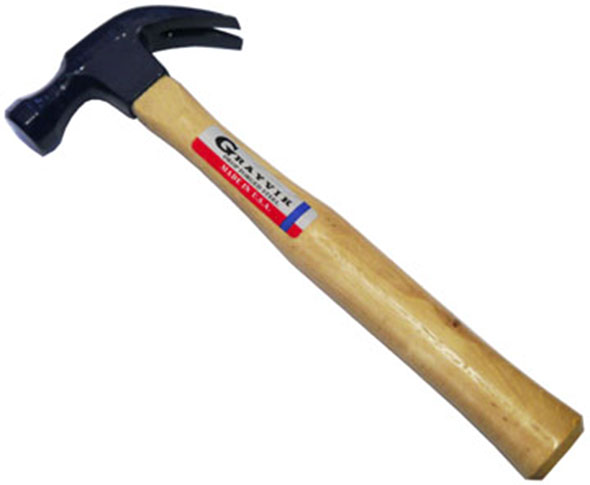 If you want to pick up a basic USA-made hammers for cheap, check out the Grayvik hammers at Harry Epstein. They’re essentially factory seconds that don’t meet Vaughan cosmetic standards.

A basic Grayvik 16 oz claw hammer is also just $6. Harry Epstein is a great supplier, but keep in mind that they charge shipping, which lessens the deal for single-item orders. And be warned that they have a wide and usually irresistible wallet-emptying selection of tools. You don’t shop at Harry Epstein and buy just 1 item.

Home Depot is sure to have budget-priced hammers under their Husky brand, and Lowes under their Kobalt brand, especially around the winter holidays and Father’s Day.

Vaughan and Craftsman hammers are good choices too, but don’t seem to be as economical as they used to be. They’re reasonably priced, but the Estwing steel-bodied E3-16C is a better bargain.

When I shop around for a new hammer, I sometimes head out to the local home improvement stores and manhandle all of the different sizes and styles. Sometimes I buy blindly online, other times I need to feel the balance and grip of a hammer firsthand before buying. It takes time and effort to do this, but there are some tools that you should get a feel for before purchasing. Maybe a 16 oz hammer is too light and you’d prefer a 20 oz hammer for general purpose household stuff.

For “just to keep around the house,” there’s nothing wrong with going with a super-cheap hammer. As mentioned in the 12 essential tools for DIYers and homeowners post, I think that a dead blow hammer or rubber mallet are worthy additions as well. Going with a cheaper hammer leaves money left over for other tools.

Estwing’s Deadhead mallet is $12 at Home Depot. That’s about as cheap as rubber mallets go for. I’d rather spend $20 on a cheap claw hammer AND a rubber mallet, than $20 on just a hammer that I might rarely use.

That’s hypothetical, as for my personal use I spent $20 on the hammer and $12 on a Craftsman mallet and then who knows how much on other sizes of mallets, hammers, and dead-blow hammers. But you get my point.

When I was shopping for my first hammer, I drooled over the Estwing, with its steel handle and fancy grip. But I didn’t buy it, I bought something cheaper. That cheaper hammer was good enough for a couple of years until I sprung for the Estwing. Hopefully this adds some context to why I recommend the particular models discussed above.

Hammers like the new Stanley FatMax AntiVibe, and most of the $25-30+ pricier high velocity hammers that have hit the market, are great tools, but they’re often more than what a DIYer or homeowner needs, at least at first. Similarly, if you need a heavier and longer framing hammer, you know you need one. If you don’t know whether you need one or not, then stick with a 16oz claw hammer for your basic nailing needs.

Okay, so I limited my recommendations to just three options.

Do you agree with these recommendations? If not, which hammer(s) do you think should be the first a DIYer or new homeowner buys?

Any Recommendations for Inexpensive Calipers?