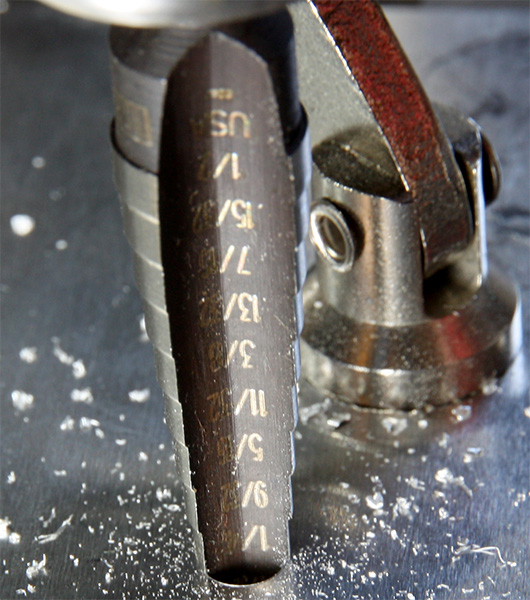 You’ve probably used step drill bits before, and if not, you should consider giving them a try. Step drill bits are incredibly useful for drilling clean holes in sheet metal, thin plastic, and other such materials.

Much of the time, except when using the largest diameter step drill bits, you don’t even need to pre-drill a pilot hole at all, although a center punch can help to prevent the drill bit from wandering during starting.

The way step drill bits shear the edges of a hole as they cut, they leave clean and nearly bur-free holes. Depending on what the hole is to be used for, you might not even need to debur it. 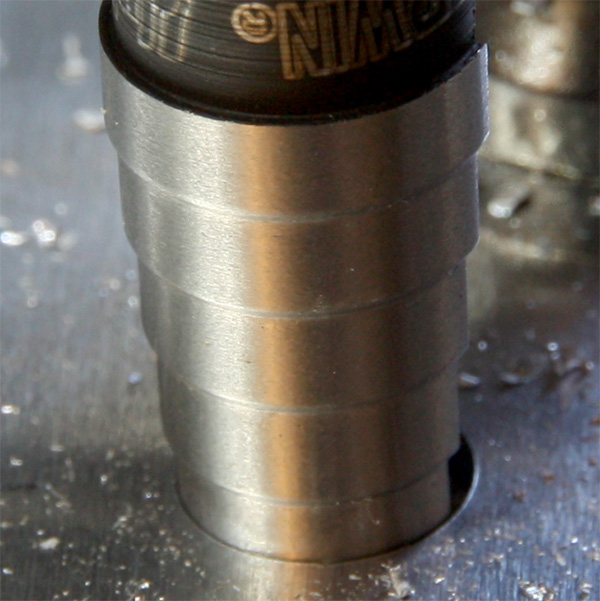 Years ago, step drill bits were solely designed for use with traditional drill chucks, but that was before cordless impact drivers were as widespread as cordless drill/drivers. It’s no longer unusual for impact drivers to be used for hole-making tasks.

Thus, there are new 1/4″ hex-shank and impact-rated step drill bits to meet those needs and user preferences.

Here, I want to take a quick look at what top cordless power tool accessory brands have to offer in the area of impact-rated step drill bits.

Personally, I still use cordless drills for a great majority of my drilling and hole-making tasks. Only recently have I been willing to try using impact-rated step drills as they are intended to be used – with an impact driver. The couple of testing and quick project experiences weren’t habit-altering – yet – but could be the start of a process.

I have gradually gotten over my avoidance of using impact drivers with drill bits and other hole-making accessories, but I have not yet found myself requiring a quick-change impact-rated step drill bit. I don’t mind it so far, and haven’t seen any performance downsides yet, but I don’t know if it’d be willing to accommodate the current 38% to 50% bump-up in cost for two of my frequently-used sizes compared to my currently-favored non-impact bits.

That’s what inspired this discussion. Top power tool accessory brands wouldn’t put energy into developing high-performing impact-rated step drill bits if there wasn’t a strong market for them yet. Perhaps one brand would dip their toes into these waters in, but several brands, and at around the same time?

I’m hoping that some of you will talk about your experiences and preferences as far as impact-rated step drill bits are concerned, with these brands or others.

Do you even care about impact-rated step drills, or are you (like me) still using drills for such drilling operations? 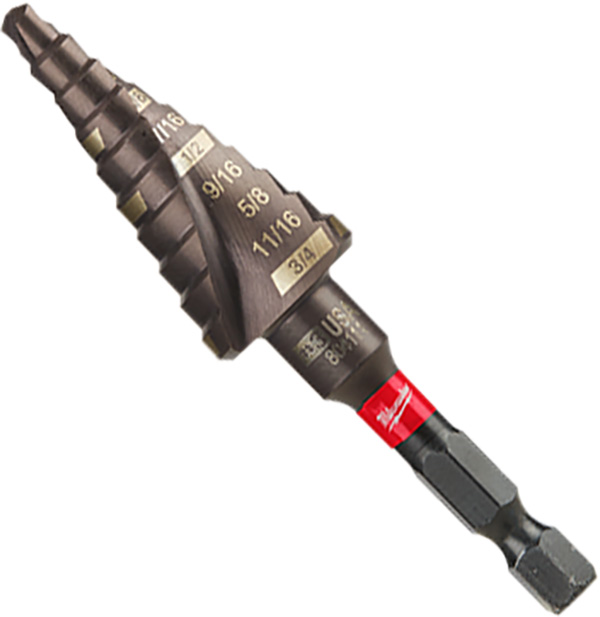 About a year and a half ago, Milwaukee came out with new Shockwave impact-rated step drill bits, describing them as the longest-lasting and fastest-cutting impact step drill bits available, and they’re made in the USA (with global materials).

The spiral flute design is said to allow the bits to produce 2X faster holes.

As shown, these Shockwave step bits have a 1/4″ hex shank.

I have NOT used these yet, but I consider their predecessor/non-impact step drills to be the best available. 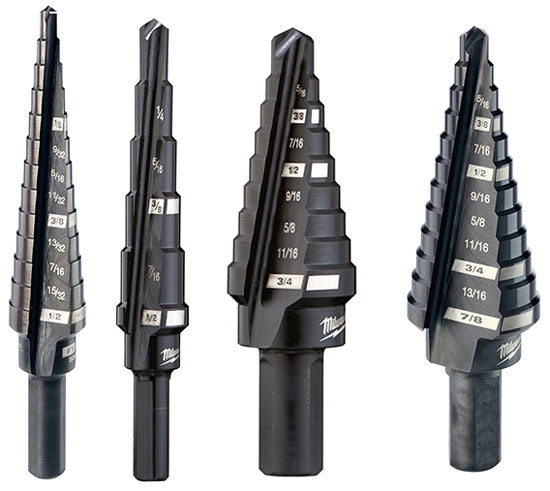 I have used Milwaukee’s dual-flute step bits for a while, and with zero complaints. They’re designed for cordless drill use and feature 3-flat shanks for reduced slippage.

I still use my older Irwin Unibits from time to time, but I’ve come to rely on Milwaukee’s step drill bits and consider them best of all.

Is it worth it? Well, do you want to be able to use step drill bits with an impact driver?

As mentioned, I’m open-minded about using step drills in an impact driver, but is it worth the premium, to be able to use a step drill in either a cordless drill or impact driver? I haven’t pulled the trigger yet – or reached out to Milwaukee to request a test sample even – but given my other experiences, Milwaukee would be my top choice when it comes time to giving impact-rated step drill bits a try.

I’d be willing to bet that their claim of 5X longer life and best-in-class performance still stands, despite Milwaukee’s launch being earlier than some other brands’ recent releases. 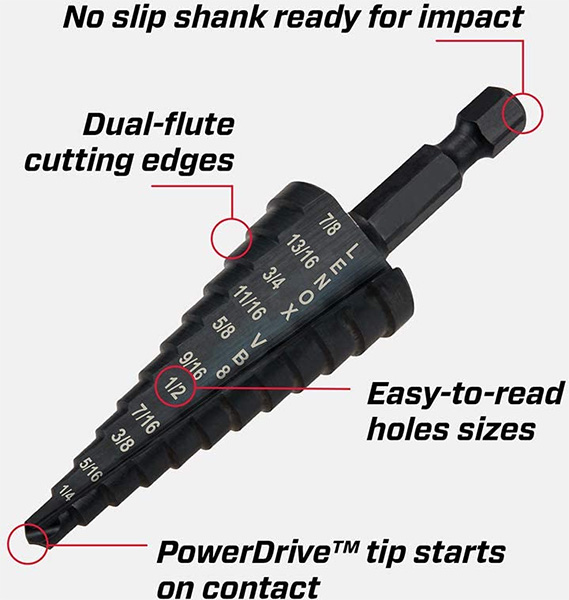 Lenox has recently introduced new Vari-bit impact-rated step drill bits. Comparing model numbers, it looks like these new step drill bits will replace *some* of their previous models, which makes things quite a bit confusing short-term but potentially easier and beneficial for users long-term.

Compared to the prior generation bits used in 1/16″ 1008 steel, the new Lenox Vari-Bit step drill bits claim to deliver:

These bits are also made in the USA (with global materials).

A PowerDrive tip is designed for “no walking, allowing for aggressive cutting and quick penetration.” They also have a dual-flute cutting edge for clean, round, and burr-free holes.

With Milwaukee, I have to choose between non-impact and impact-compatible step drills at a higher cost. With Lenox looking to have updated part of line of their step drill bits with 1/4″ hex shanks and other new features, you have one choice and can use the same tool with a drill or impact driver without having to order duplicate accessories with different shanks.

Select step drill bit sizes feature a 1/4″ Quick Change shank making them ready to use in an impact driver while other bits feature a 3 flat, 3/8″ shank for use with a standard drill.

I used a #4 test sample drill bit the other day, and then again for a quick project. Its model number is 30908VB8, and its product packaging sports the new marketing language indicating it’s a new generation bit.

When you look at product pages – via Lenox or retailers’, some show the older drill-compatible bit with 3 flats, and others also include an image of the new 1/4″ hex version that I’ve been testing.

At this time, Lenox’s Vari-Bit step bit product page doesn’t have any information about which bits have 1/4″ hex bits and which have 3/8″ flats for use in a cordless drill chuck.

I would imagine that all but the largest sizes will have 1/4″ hex shanks.

What gets my attention about Lenox’s bits is that they deliver great performance (so far), and at much lower pricing than Milwaukee’s impact-rated bits. You can get the #4 3/16″ to 7/8″ bit for $40 (via Amazon), which is the same price as Milwauukee’s non-impact bit and quite a bit less than the $55 their 1/4″ shank version sells for.

Update: It appears that Lenox has two different lists of step drill bits. Here are the ones with the 1/4″ hex shank: 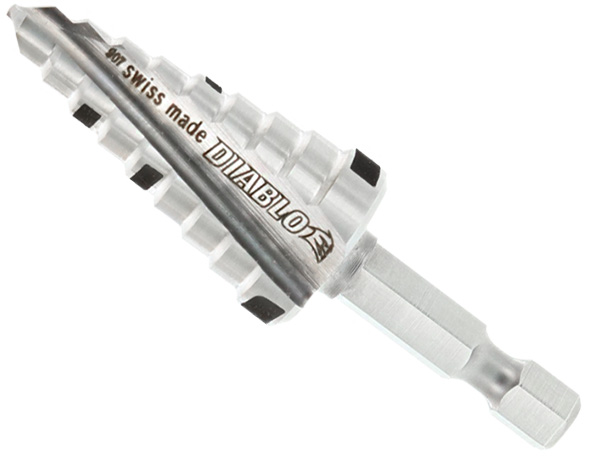 As we reported back in October, Bosch and Diablo came out with new impact-rated step drill bits.

From what we can tell, these look to be a rebranding of select sizes of Bosch’s new impact-rated step drill bits.

Wanting to know more, we emailed Diablo for more information, but they never got back to us.

We again expressed interest in press materials after seeing sponsored and paid partner STAFDA coverage in November, but still have not received any media information about their new step drill bits.

Unfortunately, we don’t know much about the new Diablo step drill bits to comment on them further. 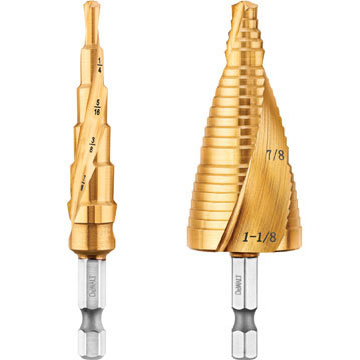 If I recall correctly, Dewalt was first to launch impact-rated step drill bits, way back in 2012.

Not to mince words, a lot has changed in the impact-compatible power tool accessory industry in the 8 years since these launched. These are proven performers with solid reviews and user feedback, but I don’t see how they could compare against modern competition. Maybe I’m wrong, in which case I welcome your opinions and experiences and am open to being convinced otherwise.

I’m satisfied with Milwaukee step drills being the best I can ever remember using, and I hold high expectations for their new Shockwave impact-rated step drill bits. I’m hesitant about the premium pricing, but would be open-minded if I were adamant about impact driver compatibility.

It’s still early, but Lenox is so far proving to be a satisfactory alternative, and continued testing might just get me used to pairing step drill bits with impact drivers.

I was eager to see what Diablo had to say about their new step drill bits, but they have not responded to any of our requests for more information.

What impact-rated step drill bits do YOU prefer?

Or, are you more like me, and still mainly use step drill bits with cordless drills? In that case, which brand(s) do you favor?

Just prior to the final version of this post, I observed a renewed surge of “sponsored” reviews and “paid partner” coverage of the new Diablo step drill bits on social media. I reached out to Diablo and asked about the absence of any official announcement or press materials, and they finally sent us a link to a late-2019 press release on Yahoo Finance.

In that announcement, Diablo emphasizes the benefits of their new step drill bits against “standard” step drill bits, which they describe as wearing out quickly, requiring pre-drilling to prevent walking, jamming during use, not being impact-ready, being hard to read, and being hard on users’ wrists and slow to use.

But does anyone use “standard” step drill bits or such low suggested quality anymore?

These new bits have been designed to be “best in the world” in terms of durability, speed and accuracy, eliminating the problems users have with standard step drill bits.

I find this language to be frustratingly ambiguous. Couldn’t a tool brand claim they designed something to be the ‘best in the world,’ fail at producing a best-in-world product, and still have such a claim be true, whereas “best-in-class” and similar claims typically require demonstrable proof in order to pass legal approval?

With this in mind, I’m simply going to assume that Milwaukee’s “best-in-class” claims are still valid.

I would be interested in exploring how well Diablo’s step drill bits perform and compare to competitors’ industry-leading products, but that won’t be possible at this time, due to an incompatibility between Diablo’s new media sample consideration and approval process and ToolGuyd’s long-standing review and ethics policies.

This update was necessary to answer in advance any questions about the new Diablo products. Unfortunately, we still don’t know much about their new step drills, and this is why.

If YOU have tried these step drills, what are your thoughts?

Irwin Unibit Step Drill Bits are Now Made in China?