ToolGuyd > Power Tools > Cordless > The BEST Jobsite Radio and Bluetooth Speaker: Dewalt Tstak vs. Milwaukee Packout (Jan 2020 Update)
If you buy something through our links, ToolGuyd might earn an affiliate commission.

Between Dewalt and Milwaukee, which brand’s jobsite radio and Bluetooth speaker is best?

I’ve been listening to a Dewalt Tstak music player for some time, and recently started testing a Milwaukee Packout radio/speaker. Which of these is the best (or at least better) jobsite radio or Bluetooth speaker?

In my opinion, the Milwaukee Packout radio + charger is the better product, besting Dewalt’s Tstak offering in quite a few areas, including sound quality.

(Both test samples were provided at no cost by the respective brands.)

Dewalt does have a new ToughSystem 2.0 Music player, but Dewalt hasn’t been able to provide a review sample and retailers don’t have it in stock yet. Some Home Depot stores had inventory around the 2019 holiday shopping season, but not around me that I could find.

One could argue that Tstak vs. Packout isn’t as fair a comparison as ToughSystem vs. Packout would be, but 1) I can only test products I have access to, and 2) the new ToughSystem 2.0 Music player looks to have much of the same audio design and user interface features as the Tstak model(s).

I have not compared Dewalt Tstak and Craftsman Versastack jobsite radios, but they look identical and are priced the same (depending on the retailer), and so I’d assume they’re the same aside from color scheme and cordless power tool battery compatibility. 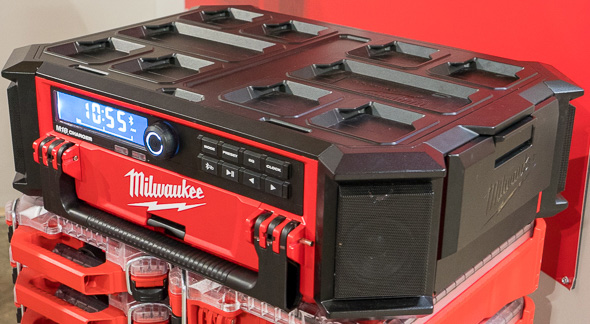 What makes one better than the other comes down to purely subjective criteria, meaning it’s a matter of opinion.

To start, I’ve been listening to the Tstak for far longer. It has decent sound quality and is fairly easy to operate. It’s a recommended choice for anyone looking to buy a Dewalt 20V Max-compatible Bluetooth speaker. And yes, it could also run on and charge FlexVolt batteries.

The Milwaukee can of course be powered by and charge the brand’s M18 Li-ion batteries.

There seems to be more of a difference when listening to a Bluetooth-streaming device than FM radio.

To my ears, the Milwaukee Packout pumps out purer or flatter-sounding music, while the Dewalt Tstak can be a little harsher. I’m sorry I can’t describe it any better. Music delivered from the Packout sounded “cleaner” to me.

I kept the volume on my streaming device (iPhone 11 Pro Max) the same, and dialed both radios in to approximately the same volume. Both radios seem to approach the same max loudness, but I didn’t check with a noise meter. They’re both plenty loud in my garage and even in wide-open settings although obviously less so at greater distances.

I had previously tested the Tstak radio with a Samsung Galaxy S8+.

What? Let’s see what your workshop playlist looks (or sounds) like. There are others, but these were the last ones where I flipped back and forth between devices.

It’s really difficult to find any fault with the Dewalt Tstak radio, and it’s only through back-and-forth testing that the Milwaukee Packout’s audio differences shine through.

Both are perfectly acceptable music sources. But when I compared them to each other, Milwaukee’s Packout Bluetooth radio sounded better. There has yet to be a test track where the Dewalt sounds better to my ears.

Things might change as the Milwaukee Packout speakers continue to burn in, but I don’t anticipate the sound changing much from here.

Quite simply, Milwaukee’s controls are easier to operate. I didn’t find myself jabbing at buttons trying to get the radio to do what I wanted, it simply worked as expected

Both radios were very staticky when I tuned into two regional FM stations (likely due to interference within the garage, I didn’t investigate), but a third was crystal clear with both. With the Milwaukee, I was able to quickly tune into the intermediate stations despite the bad reception. With the Dewalt, it kept tuning past them. I couldn’t find the user manual, but I eventually realized there’s a setting to toggle auto vs. manual tuning.

The Dewalt has a more sophisticated control panel. You can select different sources more easily, you can toggle auto or manual rotation for the LCD display, in case you want the radio to be positioned vertically instead of horizontally. The Dewalt control panel is simply more advanced.

With the radio tuning, for instance, you can select manual or auto tuning. Once you learn how, it’s easy to do so. But if you never referred to the manual about this setting, or forgot about it, you might get frustrated (as I did) about not being able to use the tuner buttons as intuitively as Milwaukee’s controls.

You can set an auto-dim for the LCD display.

One thing I didn’t like about the Milwaukee was that it emitted a rather loud beeping sound when playing around with Bluetooth connections. From a distance, that acknowledgement beep can be very helpful. It let me know that my phone was connected and that the lack of audio playback was due to my music player app auto-pausing due to the connection change. But up close, it was a little shrill and annoying. Still, to me it’s an indication that Milwaukee aimed for a streamlined and intuitive experience.

Frankly, I find Dewalt’s control panel to be more sophisticated, in that it gives users some extra controls in case they want it (or for when they need it, such as with tuner controls).

Milwaukee’s volume dial could have a little more tactile feedback or turn-resistance, but that’s an observation, not a gripe.

I like Dewalt’s Tstak music player better than their original ToughSystem radio/speaker/charger. I don’t recall much about the differences in sound, but I liked its smaller form factor better. Because of this I was worried I’d find Milwaukee’s Packout system radio to be too large, but that hasn’t been the case so far, mostly because it sits on a short Packout stack and dolly.

Milwaukee’s Packout radio has a built-in power cord and cord-wrap. The Dewalt Tstak has an AC adapter with thinner and more easily damaged cord. But, if you do damage the Tstak’s cord, you can replace it. From a “I’m a jobsite radio capable of handling rough and tough conditions,” neither Bluetooth radio/charger is at all delicate. The Dewalt power cord looks wimpy, but in use I haven’t had any problems with it. In fact, it might be easier to route around tools and equipment in a workshop setting, although some users might prefer having a standard AC plug rather than the included wall wart.

I’m not about to start tossing either box off a roof, and so my determination that they’re both quite rugged isn’t very developed (yet).

At the time of this posting, the Dewalt Tstak radio can be purchased for $199 (it’s priced at up to $279 at some other retailers), and the Milwaukee Packout is priced at $299.

For the purpose of the review I ignored all on-paper specs and based it simply on the products put in front of me. The Milwaukee is a better product in my opinion, but $100 better? That’s a tough question to answer for someone who isn’t tied into either cordless power tool system or is plans to power either radio via AC.

I have more listening and testing to do. Most listening has been done with the radios plugged into AC sources. For the Tstak, that’s how I listen to it most of the time, and for the Milwaukee I sought to establish a baseline as the speakers broke in – if this is even needed.

But right now, I feel that Milwaukee’s Packout jobsite radio is the clear winner. I like that I can stack Packout tool boxes on top of it and still have perfectly unobstructed access to its controls.

In my experiences thus far, the Tstak radio is relatively easy to use, but the Milwaukee is even easier and it sounds better.

(Both test samples were provided at no cost by the respective brands.)