ToolGuyd > Hand Tools > Bit Holders & Drivers > The Best Multi-Bit Screwdriver? Here Are 14 Recommendations
If you buy something through our links, ToolGuyd might earn an affiliate commission.

Someone recently asked for multi-bit screwdriver recommendations. This is both an easy and difficult question to answer.

What works for me or you might not work well for someone else.

Generally, I prefer multi-bit screwdrivers that work with standard 1-inch screwdriver bits. There are exceptions, of course. Sometimes a design is just so convenient and superior that it’s worth dealing with proprietary or hard to find replacement bits.

Mine isn’t yellow, it’s red, but right now only the newer colors are available on Amazon with free shipping. You can find PB Swiss tools through a couple of independent USA distributors, but the last I checked shipping is only free if you order from Amazon, and that only applies to Amazon-fulfilled tools.

The PB Swiss Insider is compact and built with a strong magnetic bit holder. The bit cartridge holds 10 precision bits, and screws into the Insider’s handle for secure storage.

There are other versions of the Insider, but they cost quite a bit more. I’ve lusted after some of those models for a while, but with my Insider 1 still going strong, I can’t justify an upgrade just yet.

I bought mine over 7 years ago. Should anything ever happen to my PB Swiss Insider, I’d buy another one without hesitation, with a blue, yellow, or black-colored handle.

Although the price seems steep, much of the cost is tied to the extremely high quality screwdriver bits.

The Wera Kraftform Kompakt 25 multi-bit screwdriver is an unusual beast. Its bit cartridge is in the middle of the tool, and is accessed via spring-loaded release hatch.

Then there’s the extendable and even removable rapidaptor locking bit holder. Rapidaptor-equipped bit holding screwdrivers are among the best locking screwdrivers I’ve found. This one can be locked in two places (recessed and extended), and can also be used in a completely separate tool, such as a cordless drill.

Let’s not forget the ergonomic shape of the handle. It’s a tad wide and bulky, but not so much as to be a deal-breaker.

Here’s a somewhat recent discussion of the Wera Kraftform Kompakt 25.

It’s priced at around $30-35, which isn’t too bad if you consider how much just the Rapidaptor bit holder costs separately – $21 via Amazon.

This model comes with a carrying pouch, for belt storage. 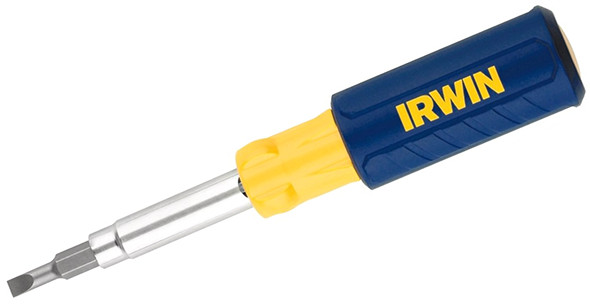 I bought one of these Irwin multi-bit screwdrivers years ago (at least 7), and it’s continued to serve me well for casual and unexpected fastener loosening or tightening needs.

It’s a removable shaft screwdriver, as are several of the recommendations here, which means the entire shaft is itself a double-ended tool. The bits are double-ended as well, with ball detents for retention.

With this kind of multi-bit screwdriver, you’ll probably replace the whole thing when a few bits are worn or lost, rather than trying to hunt down replacement bits.

This isn’t the best multi-bit screwdriver of its kind, but it works well, is easy to spot in a mess of tools or in a household junk drawer, and is nicely priced at under $10.

I’ve used Klein’s X-in-1 multi-bit screwdrivers, and they offer good quality at reasonable price points. I think I have just one 11-in-1 and a couple of more 6-in-1’s, but like them all equally.

Klein’s multi-bit drivers aren’t my go-to ones anymore, but I always make sure that I can find at least one in my toolbox.

If I lost all of my multi-bit screwdrivers, this is one of the few replacement options I would gravitate to without having to think about it. 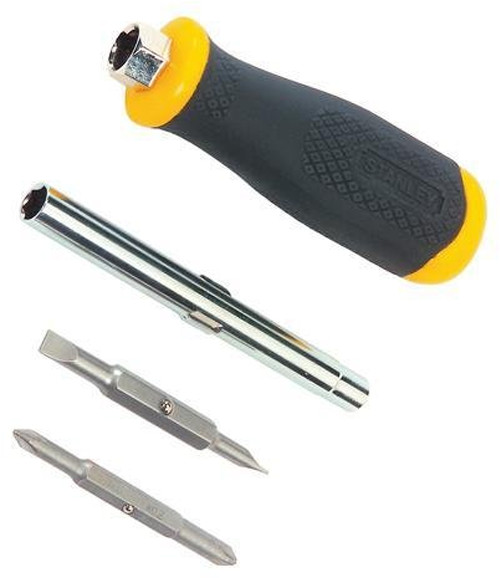 I bought a couple of Stanley all-in-one screwdrivers, and they’re quite decent for the money. This one is currently a little over $4 at Amazon, although it’s an add-on item meaning it has to be purchased as part of a larger order.

I had one with a more elaborate handle design, and the shaft rusted. Stanley offered to replace it, but I didn’t want to spend the shipping cost to send it back even for a free replacement. I guess I shouldn’t have left it exposed in the car trunk for 2 years.

Because this one is so inexpensive, I don’t feel bad about tossing it into a junk drawer, random strategic places around the workshop or home, or in my car’s glovebox.

Just because it’s cheap doesn’t mean it’s cheap. I like these drivers, and feel that I get much more value and quality than I’m paying for. Shh, nobody tell this to Stanley or they might raise the price.

If you buy multiple multi-bit screwdrivers, say 4 at a time, this is the one to buy. 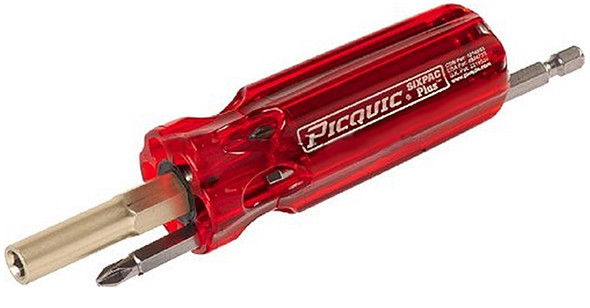 Picquic offers a couple of different multi-bit screwdrivers,with this one being the SixPac Plus. There’s also the Multique, which looks similar but is sized for smaller hands and more compact stowage needs.

It ships with 7 bits, and storage space for 6, plus one more if you keep a bit in the bit holder.

And you really do need to keep a bit in the bit holder, since that 7th bit is needed to push other screwdriver bits out of the handle storage compartments.

These are nice and handy screwdrivers to keep around.

The last I checked, Picquic SixPac screwdriver handles were made in Canada, and the bits overseas – I believe Taiwan.

I tried out the Lutz 15-in-1 ratcheting screwdriver after a reader recommendation, and although I haven’t a clue as to where mine is, it recently popped into my mind when visiting a local hardware store.

It lacks the bells and whistles of higher end ratcheting screwdrivers, and works with double-ended bits that have centered ball detents, but that’s easily forgivable.

If I could only spend under $15 on a ratcheting multi-bit screwdriver, this would be at or near the top of my shortlist.

Bit storage is elegant, but the handle is a little shorter than I’d like to see on a full-size screwdriver. On the upside, the Lutz ratcheting screwdriver is more compact than many other ratcheting and multi-bit screwdrivers.

PB Swiss’s 455 M T-handle universal bit holder doesn’t quite fit in with the other tools discussed here, but I didn’t want there to be “only” 13 recommendations. One more was needed.

But, it does fit in somewhat, as it does offer built-in bit storage and works with standard 1/4″ hex screwdriver bits.

There are lots of things to love about the PB Swiss Tools  T-handle screwdriver, such as its solid construction, free-spinning sleeve for rapid turning, and thumbscrew-accessible bit storage compartment.

With the T-handle configuration, you can exert more torque than you could with most if not all of the multi-bit screwdrivers shown here.

Felo’s multi-bit screwdrivers of this style are harder to find these days, but it looks like Carbide Processors has these Felo 373 Bit-Boy screwdrivers, and with multiple bit kit options.

As with the Wera, these have a somewhat chunky handle geometry, which you might or might not like. I like mine, but don’t know if I’d buy it again. It’s not as featured as the Wera, but it can be found for less than half the price, depending on your choice of bit loadout. 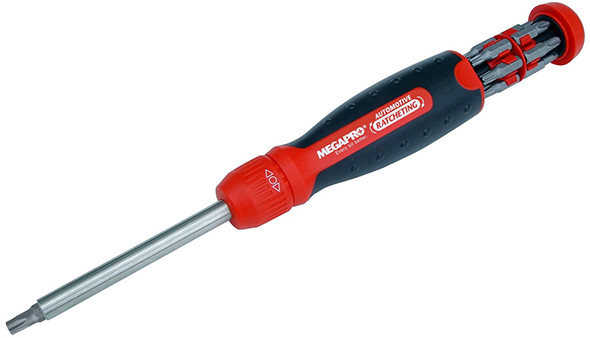 My first-ever ToolGuyd review was of a Megapro 15-in-1 hex bit screwdriver. In one of those images you can see my Irwin and Klein multi-bit screwdrivers.

I didn’t quite like the handle, which was large and a little slippery.

When Channellock came out with a Megapro-made ratcheting screwdriver, I was quite pleased with the grippy and comfortable handle. That screwdriver works with Megapro’s double-ended bits, which are easily replaced, at least as far as proprietary or special bits go.

This Megapro “automotive” screwdriver has the same comfortable handle and excellent ratcheting mechanism, but works with standard 1/4″ hex bits.

It’s a little pricey, but Megapro’s quality and performance are worth it. This could be the first and last ratcheting screwdriver you ever need.

At just a penny over $5, this might be the cheapest ratcheting screwdriver that I’ve used, and I have yet to throw it to the ground in a fit of rage.

It’s not as good as any of the other multi-bit screwdrivers mentioned here, but it’s half-decent and will cost you less than a meal at your favorite fast food joint. 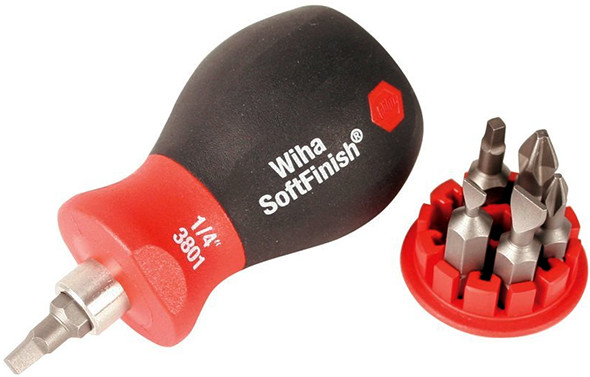 I have yet to try Wiha’s stubby multi-bit screwdrivers, but they’ve been on my wishlist for a long time now. They’re teeny, with storage for 6 bits in their compact and stubby handles.

There are 3 versions available on Amazon – one with Phillips and slotted bits, another [more expensive] one with fractional hex bits, and a third model comes with Phillips, slotted, and Pozidriv bits.

I’m a big fan of Wiha’s SoftFinish screwdriver handles, and use my stubby one-piece screwdrivers quite often.

This is another multi-bit screwdriver that I have not yet tried, but numerous readers have recommended the Mr. 7-Hands screwdriver over the years. It has a unique folding arm design, but it looks like the bits aren’t user replaceable. 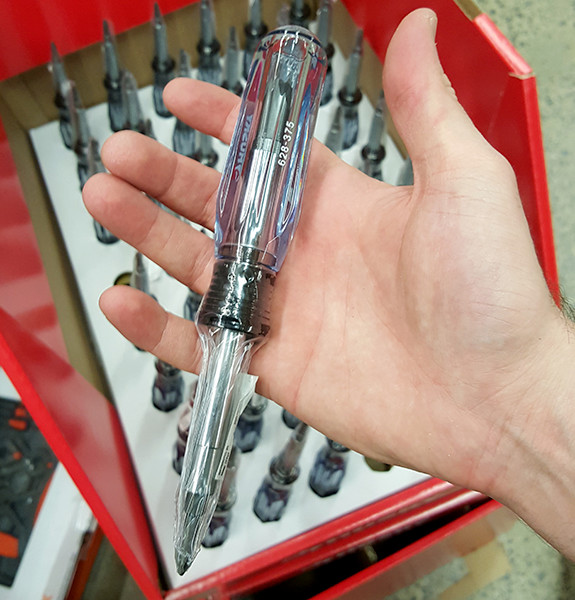 The next one I’ll probably try is this Husky multi-bit screwdriver, which is $5 at the local Home Depot. I can’t seem to find the one I thought I left in my car’s glove box or trunk, and so a replacement is in order. For $5, I won’t mind leaving this in the car until I need it.

I would consider buying another Stanley All-in-One that’s mentioned above, but I think that the hard handle on this one might be more durable than the Stanley’s soft grip.

Do you have a favorite multi-bit screwdriver?

And do you have different favorites for different uses, as I do?

Although I love my PB Swiss Insider screwdriver dearly, I keep usually reserve it for EDC and on-the-go fastening needs. I’ll use it for home projects sometimes too. But I’m not going to buy one for every glove box, kitchen junk drawer, tool kit, or other locations where a less expensive multi-bit driver would suffice.