ToolGuyd > Hand Tools > Mechanics' Tools > Beta LED Work Light Review
If you buy something through our links, ToolGuyd might earn an affiliate commission. 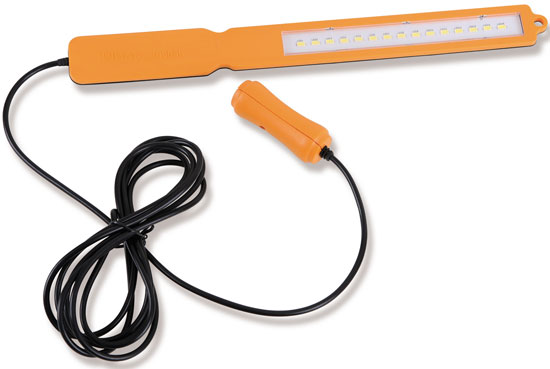 Beta Tools’ USA distributor sent over the new 1838SL LED light bar work light a few months ago, and I was really eager to try it out. The work light is super-thin, ultra-bright, and is said to answer some of the major problems mechanics and techs have with other LED work lights. 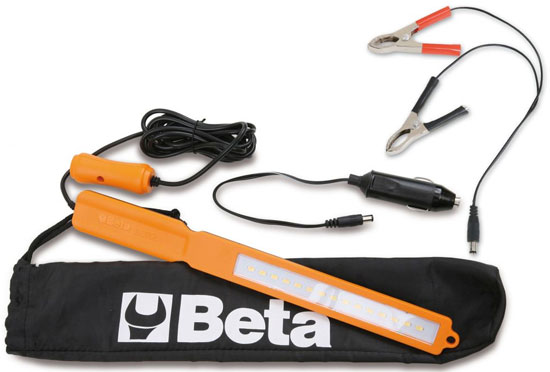 Here’s a quick intro video from Beta that shows some of the LED light bar’s highlights:

The work light is as bright and compact as Beta promises. It feels solidly built, at least as solidly built as a 1/4 inch-thin plastic housed work light could feel, although that same quality is not found in both of the power attachment accessories.

The power cord is long enough to where you can plug the light into a cabin power port or car battery and use the light in or around most areas of a car.

There are no batteries to worry about either, but this of course means you have to be plugged into a 12V source whenever you want to use the light.

First, I would like to see additional power options. With the included accessories you can only connect the LED light bar to a car battery or cigarette lighter-style auto power jack.

I had a spare 12V 2.0A AC power adapter with a compatible barrel connector and was able to power the plug from a power outlet no problem. This means that you can power the work light with an AC power adapter or 12V battery pack, but you’re on your own to make it work.

Second, there’s no on/off switch. The work light is always on if it’s plugged in. The orange inline dongle at the end of the built-in power cord houses a 1A fuse and a power input barrel jack. Surely a switch could have been built into the work light anywhere between the handle and the orange dongle.

You can add an inline barrel jack power switch with a ~$2.50 off-the-shelf accessory, or you can build one for about as much.

Third, the LEDs deliver majorly bright illumination. There’s no dimmer switch, and no on/off switch, so the light is always on unless it’s unplugged. In my opinion, the light is a little too bright for use in very close working areas, mostly where there’s a higher risk of glare. It works a lot better if you can get a little distance between the work light and whatever you want illuminated.

More specifically, what I don’t like about the alligator battery clips is how they twist sideways when you open and close them. If I control my effort I can get them to open and close straight, but I shouldn’t have to operate alligator clips with such precision. I don’t think these clips will last long in an auto shop environment.

The good news is that, if the alligator clips do fail, it will be possible to build a heavy duty replacement power adapter quite easily. Remember, the LED work light is powered through a relatively standard sized barrel jack.

On the bright side, most of the things I don’t like about the LED work light can be fixed with a few bucks and DIY enhancements.

I don’t like the Beta LED work light, but aside from the somewhat shoddy alligator clips my reasons are mostly based on personal tastes and preferences. It’s not the best match for me and how I use work lights.

Are you a mechanic or auto tech that’s looking for a fits-almost-anywhere work light? One that’s super-bright? One that can be powered off any car battery or 12V auto power port? This might be the work light for you. It’s smaller than most other corded work lights, and unlike cordless work lights this one doesn’t require users to dance around charging cycles.

I cannot fully recommend the work light to everyone, but I also cannot recommend against it. It’s a nice work light, but it’s strictly aimed at automotive users and is built accordingly. This is one of those work lights that you will either love or hate.

Thank you to Peerless Hardware for providing the review sample unconditionally. Review samples are typically given away, donated, or retained for editorial and comparison purposes.