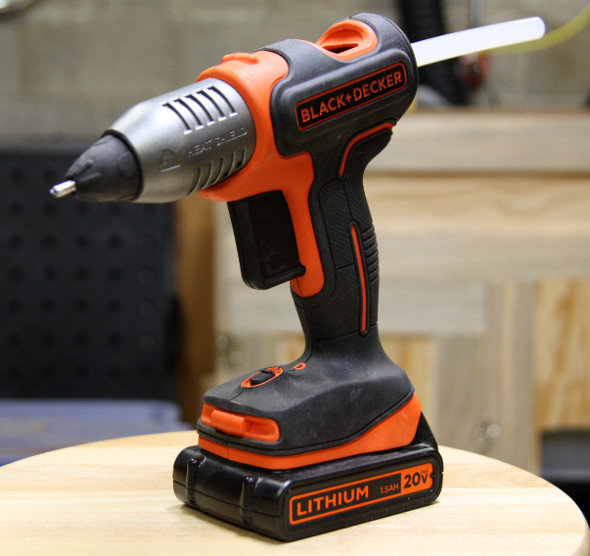 Back in October 2015, Stuart previewed the Black & Decker 20V max cordless glue gun (BDCGG20C). Towards the end of 2015, Black & Decker shipped Stuart two glue guns and he sent one to me for testing. Since I didn’t have batteries to run the tool, Black & Decker sent me a charger and two 1.5 Ah batteries. I’ve been using it got the past few months and want to share what I’ve found.

To recap, this 125W cordless glue gun is part of Black & Decker’s 20V Max Lithium system. They claim it’ll run up to 2 hours with a 1.5Ah battery pack and will heat up in just 90 seconds. The glue gun accepts standard 1/2″ low temperature or general purpose glue sticks. As we’ll see in the tests, this gun only heats the glue to about 250°F.

The glue gun weighs 1.75lbs with the 1.5Ah battery installed — it’s just 15oz without the battery! It doesn’t require a stand like many hot glue guns, since it is very stable resting upright on its battery, although you’ll wan’t to make sure you don’t put it on top of anything dripping hot glue might damage.

To test some of Black & Decker’s specifications, I used one of their Smartech batteries because it allowed me to see the charge level of the battery. I checked the warm up time at the beginning of each test I ran after the glue gun had cooled overnight. I probably didn’t need to wait that long, but it’s just how the tests fit into my schedule.

So where did Black & Decker get 90 seconds? I’m guessing they are being conservative. They are actually allowing enough time to make sure the glue gun is fully up to temperature every time. 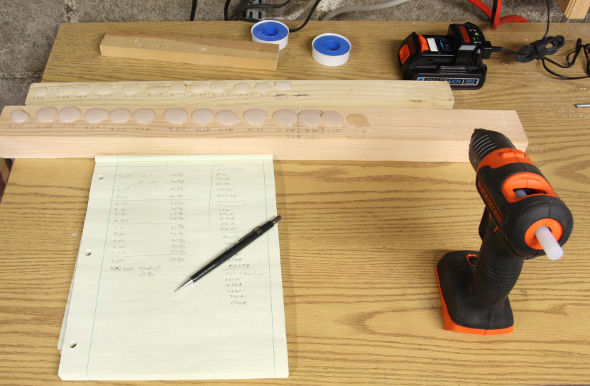 I ran two battery longevity trials. I started the clock when I turned the glue gun on, ran the start time test above, and then every 10 minutes I squeezed the trigger twice and recorded the battery percentage from the Smartech battery. It’s hard to know exactly what normal normal use is, but I thought this test was a good approximation.

I was called away from the first test by a neighbor with an emergency 1 hour and 40 minutes into the test. When I went back to restart the test the battery was at 33%. After the gun heated up and glue started flowing, it immediately shut down and wouldn’t stay on. The battery percentage then read 12%.

This interruption was fortuitous, because it exposed the difference in energy use between ramping up to full temperature up and maintaining temperature – more on this in a minute.

The second test ran for 2 hours and 8 minutes, when the glue gun automatically turned off. I graphed the battery percentage over time from both tests and found that if the first test would have run to completion, I probably would have gotten a similar 2 hour run time. 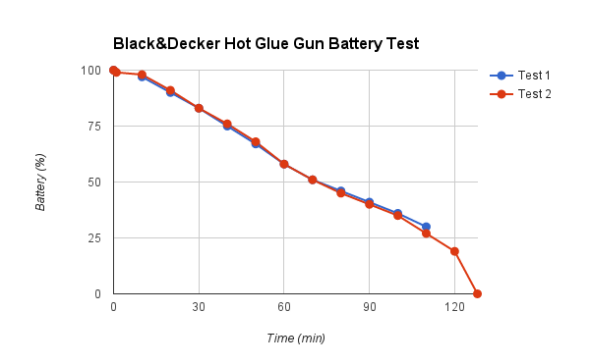 If you look at the graph, the battery drain was pretty linear except for at the start and the beginning. I don’t think this meant that the glue gun used more or less energy during these times, I think it is some non-linearity in the battery capacity reporting. The steep drop off at low battery capacity is probably related to lower battery voltage.

The fact that the glue gun uses more energy to heat the element from room to operating temperature than it uses to maintain operating temperature confirms some other weirdness I was seeing. On a fully charged battery I would turn it on, leave it on for between 10-20 minutes then turn it off. After the fourth or fifth time of doing this, I’d pick up the glue gun and the battery would be dead even if I’d run it for less than an hour total. 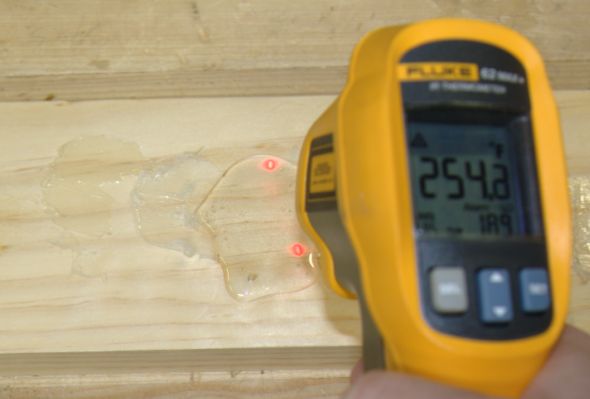 Black & Decker doesn’t say that this is a high temp glue gun, so I assumed it was a low temp gun. Low temp glue guns run in the 200 to 250°F range while high temp usually heat the glue above 375 to 450°F. I wanted to verify this with a temp gun.

It’s really hard to get a reading on the tip of the glue gun with an IR gun, so I figured that the next best thing was to measure the temperature of the glue coming out of the gun. I squeezed out a large circle of glue and used the Fluke IR gun to measure the temp at 254°F. One thing that really surprised me was how long the glue stayed hot in a large puddle. 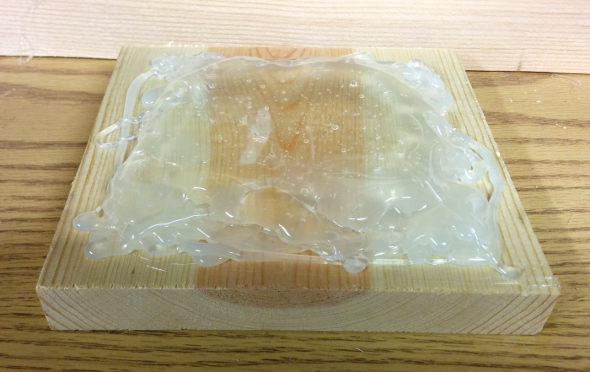 After using and testing this glue gun for a while, I wondered two things: can I get this glue gun to stall, and how fast can I run down the battery? When I say stall, I mean can I squeeze so much glue through the gun that it cools down enough that it won’t melt more glue?

To run the test I simply let the gun heat up until glue started flowing and then kept pulling the trigger. After about 10 minutes, I got tired after going though four 10″ inch glue sticks and running the battery down to 66%. Not once did the glue gun “stall,” but the trigger would get harder to pull and glue flow would slow down until the gun recovered. In a way the glue gun self limits itself, rather than stopping completely.

Since the glue sticks are 10″ and 1/2″ in diameter that’s about 2 cubic inches of glue per stick, and 8 cubic inches in this test. That’s a lot of glue and I didn’t even drain the battery by half.

Black & Decker lists installing baseboard, temporarily holding up crown molding, gluing tile into place, and other household repairs as uses for their hot glue gun. Over the last half year I’ve found several other uses for the tool. 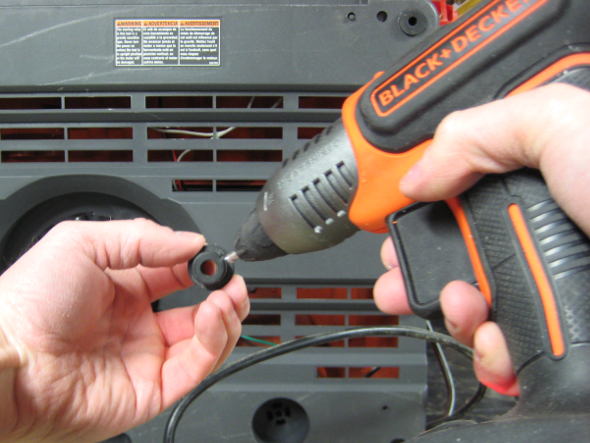 Here I’m gluing in the feet of my Ridgid oscillating sander, every time I move the thing I lose a few of the feet and have to go crawling around the floor to find them. I didn’t want to permanently affix them to the bottom so I used the hot glue gun to tack them into place. I haven’t lost one since. 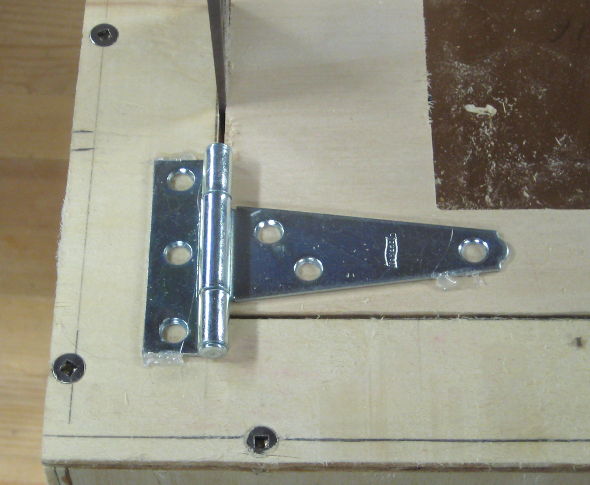 Back when my daughter and I were working on the Little Library project, I used the glue gun to tack the hinges once I had aligned them properly. Then I used a self centering bit to drill the holes. 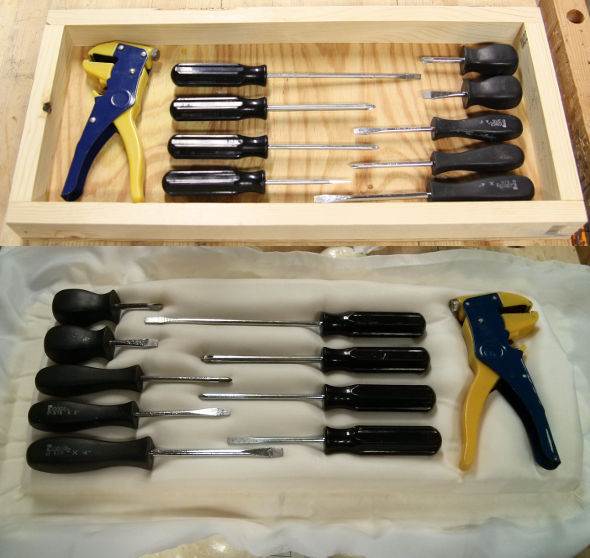 A while ago, I attempted to make a toolbox drawer insert with spray foam. I used hot glue to hold all the tools in place in the mold. Unfortunately the results were less than spectacular and I’ve since moved on to Kaizen foam. 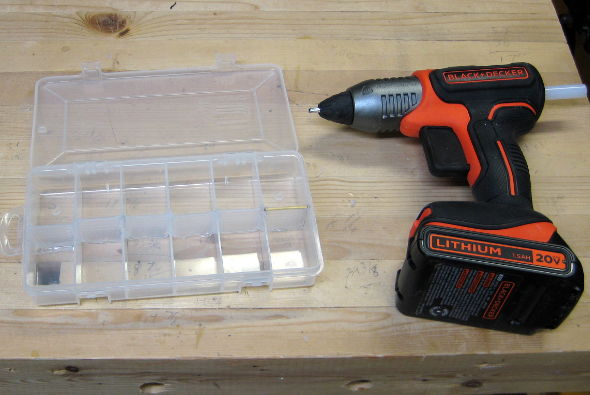 I needed a small organizer with many little compartments. What I had on hand were some small Plano boxes and plastic dividers from larger boxes. I cut the dividers down to size and glued them in place. It worked so well I made three more. 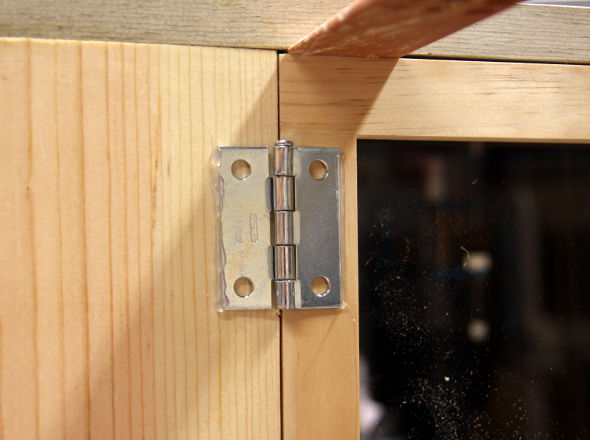 Again I used the glue gun to position the hinges on my router cabinet door. I temporarily glued it in place so I could drill the holes with a self centering bit. In hindsight maybe I should have used less glue, just a few dots, or not let the glue cool for so long. It didn’t peel away nicely and I had to use a chisel to remove all the residue. I usually don’t have this problem, but I was called away and didn’t get back to the project until the next day. 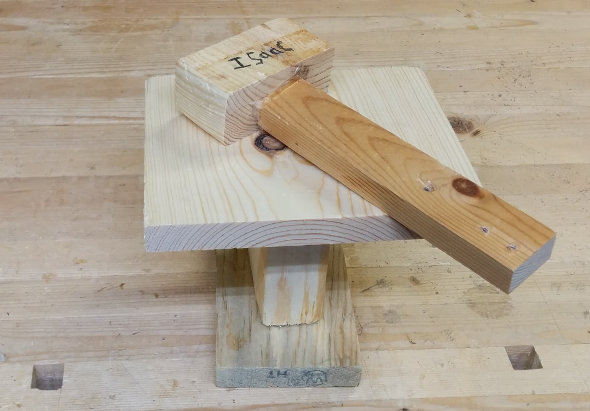 I highly recommend giving this glue gun to your kids and letting them have a go at your scrap wood bin. Just make sure they understand not to touch the hot glue gun tip or fresh hot glue*. You might be amazed at what they create. Above is the hammer and anvil my son made one day. The bond between the handle and the head was surprisingly strong.

*All the times I’ve touched freshly squeezed hot glue from this gun, I haven’t been burned once. It hurts a little sometimes, but I haven’t even had any redness after I’ve removed the glue.

Stuart’s Note: I too unfortunately know what a hot glue burn feels like. Hot glue will usually burn you on contact, and prolonged contact with molten glue will burn you worse. I digress, but what do you think is worse, a high tack glue with fast cool time, or one with a slower cooling time?

I like this glue gun. It stands up on its own, it heats up fast, and it lasts about 2 hours on a charge. I’ve found myself using it in the shop more than I ever thought I would. If you already have B&D 20V Max tools, at the $36 this gun is selling right now, there’s no reason not to pick it up. Even if you haven’t used a hot glue gun in your shop before, having one at the ready will help you solve problems in new ways.

I only have a couple minor of issues with this hot glue gun. First you insert the battery from the rear. While this doesn’t affect the glue in any other way, it’s just backwards from most other tools where the battery slips on from the front. I’m not sure if there’s some efficiency gained in materials or in the operation, but it just seems a little strange to me every time I change the battery.

Perhaps this battery configuration was decided upon for the ergonomics and convenient upright standby angle. Or maybe it was to ensure your hand stays far away from the hot end when swapping out batteries.

Second, the kit only comes with one battery and a slow charger that can take up to 4 hours to charge the battery. Once you’ve used the gun for 2 hours and run the battery out of juice, you’ll be waiting a long while before you can use it again. Black & Decker makes both a fast charger and higher capacity batteries. Once you start using the glue gun a lot, you might be convinced to buy more batteries or upgrade the charger.

This cordless glue gun has been on the market for a few months now, so it’s available from retailers like Amazon. If you already have Black & Decker 20V Max lithium batteries, right now you can grab the bare tool (BDCGG20B) there for $36, which is quite the bargain. If you are looking for a kit with battery and charger (BDCGG20C) you’ll pay $79. Two glue sticks are included with either package.

Thank you to Black & Decker for providing the review samples unconditionally.