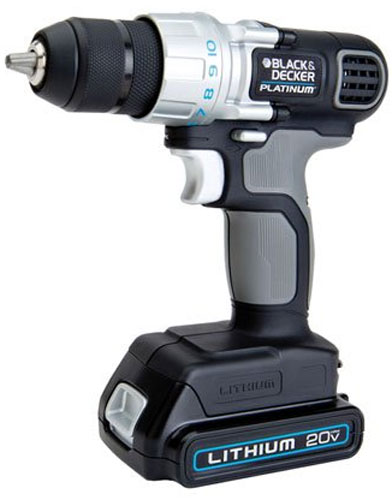 As with the Platinum-series dustbuster, the new drill was designed to strike a balance between style and performance. It indeed has a softer look compared to most of the other drills, drivers, and other DIY and construction tools on the market.

I received a model for testing, and the drill is actually quite decent. It looks great, is compact and lightweight, and performs decently in light drilling and driving tasks. It even came with Black & Decker’s fast charger and two Li-ion batteries.

However, three things make it clear that this is still a Black & Decker drill – its non-ratcheting 2-sleeve chuck, single-speed gearbox, and 115 in-lbs peak torque.

The drill is built from premium materials, including the comfortable grip. To be honest, I wish all Black & Decker tools looked and felt like this one. I think the grey and black color scheme is easier on the eyes than their typical bright orange-red and black colors. I am especially fond of the turquoise blue clutch markings and battery accents, as that is my favorite color.

I understand what Black & Decker was going for with this model, and they really did a great job with it. Even so, it is hard to ignore that there are better drills available for less money.

If I were in the market for an inexpensive drill right now, I would look at the Bosch 12V, Milwaukee M12, or Porter Cable 20V drills which are currently still on sale for $99 or less. Each of these three drills are more powerful, less expensive, and are built with ratcheting chucks and 2-speed gearboxes.

At its current price, I could only recommend the Black & Decker 20V Max Platinum drill/driver kit to those who care about styling above all else. The drill kit would have to drop in price to $85 or $90 to earn a more enthusiastic recommendation from me.

For reference, the model this drill is based on, the Black & Decker LDX120C ($70 via Amazon), has a plastic chuck, slow charger, and only comes with a single Li-ion battery pack. Given how the Platinum drill has a metal chuck, different styling, and comes with a better charger and additional Li-ion battery, I think the current street price of $122 is maybe only a few bucks higher than I would have expected.