ToolGuyd > Power Tools > Cordless > New Black & Decker GoPak 12V Max Tool Battery Doubles as a Phone Charger
If you buy something through our links, ToolGuyd might earn an affiliate commission. 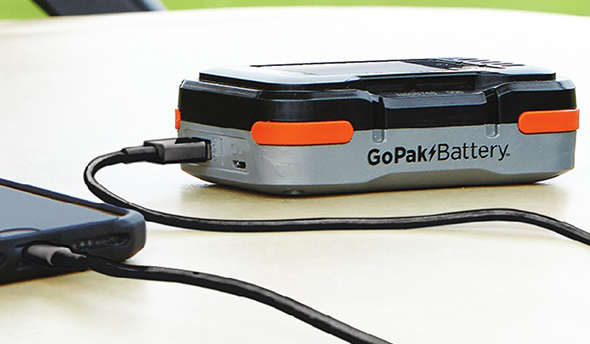 Back in September, Black & Decker put out a press release about their new GoPak system. It’s basically a new 12V Max cordless power tool line, with a twist. The Black & Decker GoPak battery pack can also charge USB devices and is recharged using a USB charger.

This new line of tools is targeted towards DIYers. Right now, there are only 4 tools in the GoPak ecosystem: a drill, a jigsaw, a detail sander, and an LED worklight, but Black & Decker is hinting that there will be more tools coming in 2018. 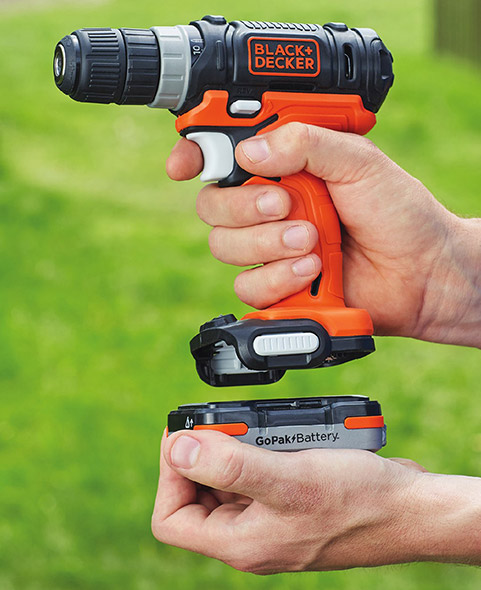 The drill has an 11-position clutch and LED light on the base to illuminate what you are drilling or screwing. 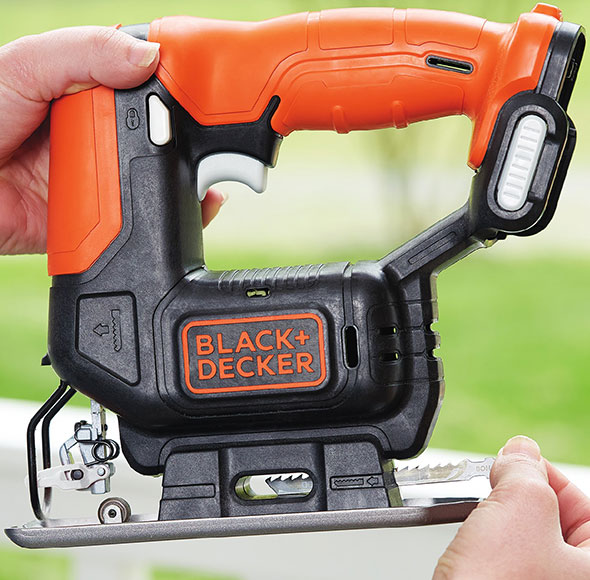 The jigsaw features a tool-free blade change mechanism and it looks like it has on-board blade storage for at least one blade. 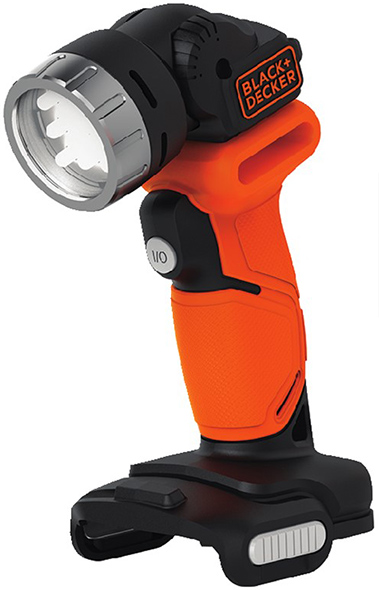 The LED work light has a pivoting head, and looks like it could be placed down standing upright on its base. 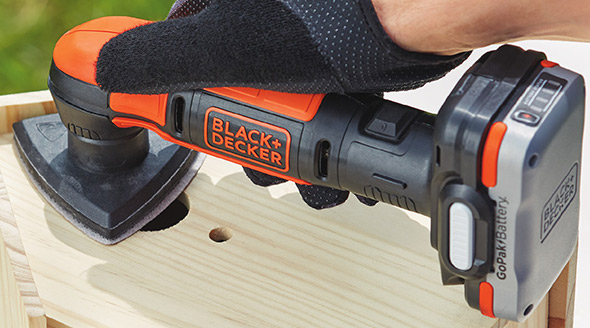 Finally, here’s a close-up of the detail sander. 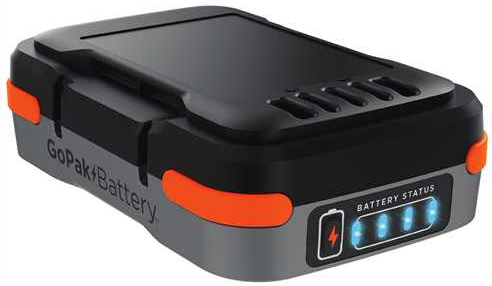 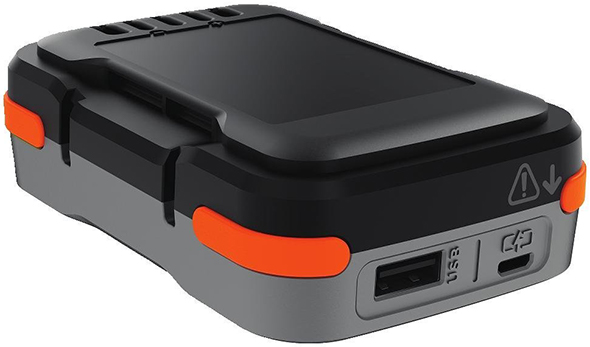 Since this is a 12V Max battery (10.8V nominal), it’s more than likely a 3 cell pack. This flat pack looks like it’s compact enough to keep in your pocket for when you need to charge your mobile devices. It has an on-board charge meter and a USB A connector that can deliver up to 2.4A for charging your devices.

Black & Decker doesn’t mention it anywhere in their information about the GoPak, but from what I can gather, the micro USB port next to the USB A port is for charging the battery. 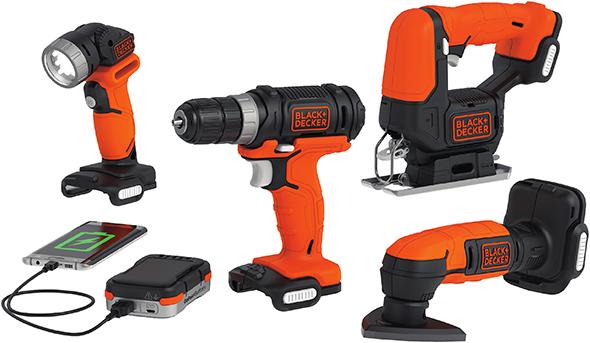 Right now, there are two GoPak products you can buy: a 4-piece tool kit, and the battery pack by itself. The battery comes with a USB charging cable and the kit includes the four tools, battery, charging cable, drill bit, jigsaw blade, and three sheets of sanding paper.

Even though I saw the battery in store at Lowes, it isn’t listed on their website. It is available though at Amazon, priced at $40 and said to be available for purchase starting November 1st, 2017. The combo kit will also be available at Amazon for $130, but it’s only $100 at Lowes.

Stuart’s Note: I bet we’ll see a “new lower price” at Amazon as part of a holiday deal or as the seasonal price. 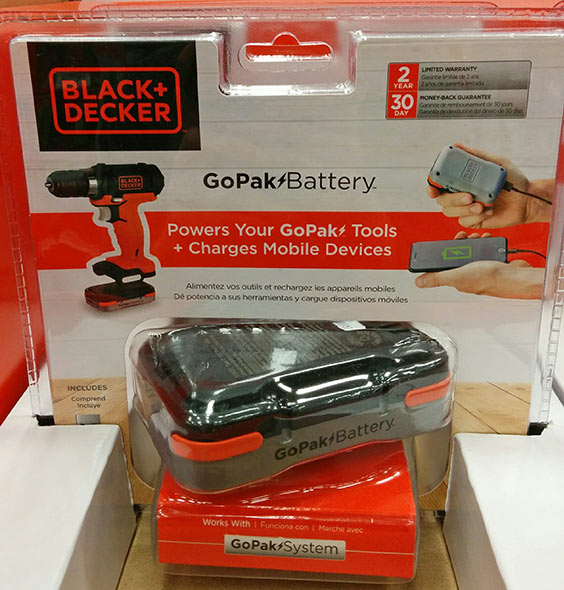 The reason I’m writing this now, and not sooner, is because I spotted both the battery and the tool kit in a display that was being set up at my local Lowes last weekend. I had seen posts about it as early as June on Instagram, and I had seen press releases in September, but it didn’t hit me that the battery didn’t need a charger until I saw it in person.

As I mentioned above, one thing they don’t address in any of their marketing material is how you charge the battery, but there is clearly a USB micro port next to the USB A port on the battery. Both the tool kit and bare battery only ship with a charging cable so I have to figure that you use the charging cable to plug the battery into a USB charger.

Stuart’s Note: That is also how a lot of USB charging power banks, such as my Anker one, are designed.

This is what intrigues me most about this system — the battery charging via USB. You don’t need a separate charger. You can charge it anywhere you charge your phone: your computer, your desk, even your car. The downside is that it probably takes several hours to recharge the battery and there is no way to fast charge the battery as of yet. Maybe that’s one of the new products they’ll introduce in 2018.

Stuart’s Note: A lot of Black & Decker cordless tools, at least those that hover right at “opening price point” levels, are bundled with “overnight” chargers that take something like 6 hours to recharge. I always assumed it was to keep the charger costs low, but it could also be due to the lower-spec’ed nature of the battery cells that are perfectly suited for entry-level DIYer tools. It’s hard to say.

I agree with Ben, about the interesting nature of the battery pack. It is basically a USB power bank that doubles as a cordless power tool battery pack. Or vice versa. Black & Decker cordless power tools aren’t typically considered heavy regular use tools. They’re the kinds of tools a DIYer or homeowner buys on a budget with maybe a few quick projects in mind.

So why not design the battery pack so as to have added functionality all those days, weeks, and maybe even months when it’s not going to be powering any tools.

Hmm, it looks like the battery pack release mechanism is built into the tool, and not the battery. That’s probably what gives it the clean, compact, and maybe even pocket-friendly shape.

Lastly, no, you’re not the only one who thinks these GoPak tools look like toys.