ToolGuyd > Power Tools > Cordless > Black & Decker Gyro Screwdriver Review
If you buy something through our links, ToolGuyd might earn an affiliate commission. 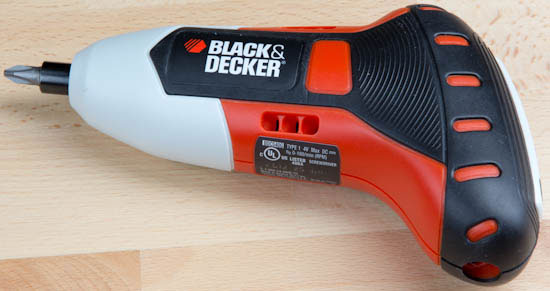 Black & Decker’s new Gyro 4V li-ion cordless screwdriver, model BDCS40G, is not just an ordinary compact driver – it’s a new motion-controlled screwdriver. With this being the first pocketable li-ion driver with gryoscopic controls, I just had to give it a spin. 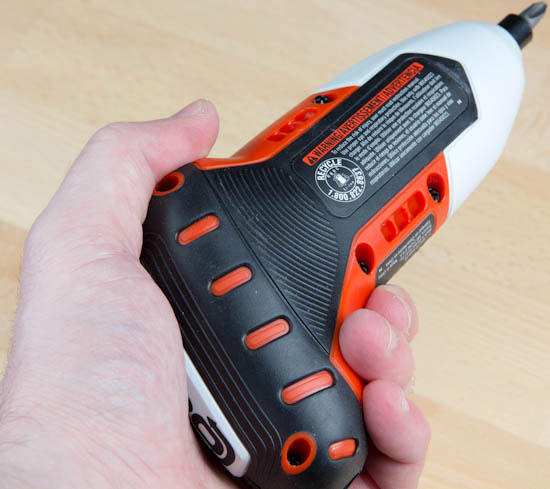 Although I rarely review Black & Decker products, I’m actually quite fond of the brand. A 12V Firestorm drill/driver served me quite well years back, as did B&D’s first-generation 3.6V li-ion driver (LI3000). The Gyro won’t drive in long lag bolts, but it can handle most common household project fasteners (e.g. #6, #8, #10 wood and machine screws) with ease.

The Gyro has no trigger and no reverse switch. Instead, you tell it to rotate and in which direction by turning your hand.

At the the rear of the tool, the Gyro-labeled white are is an activation switch. When you hold the screwdriver in your hand, you automatically put a bit of pressure on the switch, activating the screwdriver its gyro sensors. 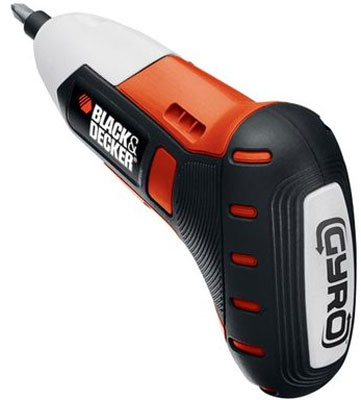 Once you’re holding the tool, twist it to the right for fastener installation and tightening tasks, or to the left for fastener loosening and removal.

The built-in gyroscope also controls the variable speed, allowing for 0-180 RPM adjustment in about 12-15 steps. This allows you to dial in just the right speed you need – faster for longer fasteners, slower for those that require greater precision or control.

It is worth highlighting that the Gyro works in any direction: upright, horizontal, vertical, upside down, and at every other angle we attempted.

The Gyro is surprisingly comfortable to use. At first I was concerned about how well it would fare in tight spaces, overhead, or when gripped in a way to apply greater pressure, but my worries were unfounded. I was able to use the Gyro comfortably in any way that a traditional pistol-grip driver can be used.

Controlling the Gryo was easier than anticipated. By variable speed I assumed there would be 2, maybe 3 speed settings in the 0-180 RPM range. I counted about 12-15 steps. Users will most usually gravitate towards the slowest 2 speeds or the fastest speed, but it’s nice to know there are intermediate speed options.

The gyroscope direction and speed controls are relative, meaning that you don’t have to hold the driver completely parallel for it to work. Working overhead? Holding the tool sideways? Upside down? At diagonals? No problem.

Torque levels are what you would expect for a 4V “Max” lithium-ion screwdriver. Black & Decker rates the peak torque at being 35 in-lbs, which is more than enough for general household use and minor repairs.

The 4V lithium ion battery is non-removable and it is said that the battery can remain charged for up to 18-months. It takes a couple of hours to charge, so be sure to plug it in overnight ahead of a project.

Black & Decker’s Gyro is a well-thought-out cordless driver. The gyroscopic feature might seem like a gimmick, but it works exactly as advertised and with no first-generation hiccups.

For about $40 – about the same as Black & Decker’s previous-generation screwdrivers – you get a compact and lightweight cordless screwdriver for light to medium duty DIY tasks.

Pop the driver in a kitchen drawer or toolbox and it will hold  charge for over a year. It also has an LED worklight, but show me a modern drill or driver that doesn’t.

Overall the Gyro is a neat household screwdriver, one I am comfortable recommending. It comes with two 1-inch insert bits and a small wall charger. Charging time is a couple of hours, with Black & Decker recommending users leaving it to charge overnight.