ToolGuyd > Hand Tools > Pliers > Blackhawk Locking Pliers Review
If you buy something through our links, ToolGuyd might earn an affiliate commission.

The fact that none of the major brands produce locking pliers in the USA anymore has led many tool users to consider other locking pliers brands and styles. Many people like Grip-On branded locking pliers, which are made in Spain and also rebranded in the USA under Snap-on and Proto labels, but these pliers are priced a little high for some DIY’ers.

I was recently shopping for some locking pliers that were moderately priced, and I eventually settled on a set from Blackhawk (SKU PT-1105S). I have been using the pliers in my garage over the last couple months and so far, I have been pretty pleased.

Blackhawk – which is officially known as Blackhawk by Proto – is part Stanley Black & Decker’s industrial segment, and mainly offers mechanic’s tools aimed at industrial and automotive users. Blackhawk tools are positioned slightly beneath Proto, in terms of pricing.

This five-piece set is made in Taiwan, and was purchased new from a seller on eBay for about $40. The set includes straight, curved and needlenose pliers, with overall lengths ranging from 5 to 10 inches.

The teeth on all the pliers appear well formed and so far have held up well during use. 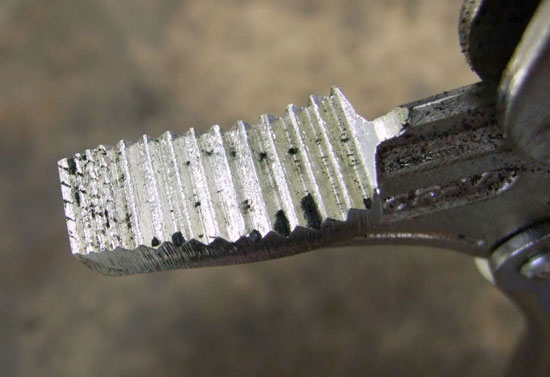 These pliers are very similar to ones sold under the Stanley brand, although the Stanley models lack the comfort grip.

Ed. Note: It is reasonable to assume that Stanley and Blackhawk locking pliers are manufactured at the same factory and should perform similarly. The versatility and pricing of the 5pc Blackhawk set, as well as the added comfort grips, make it a great buy. 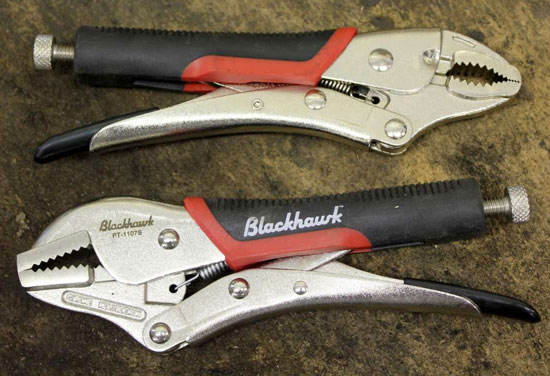 These are basic locking pliers. Their designs are similar in many respects to the traditionally styled locking pliers made by Vise Grip and several companies, but with one major difference in how the locking mechanism releases.

Here’s a comparison of the most common designs you’ll find on most brands of locking pliers: 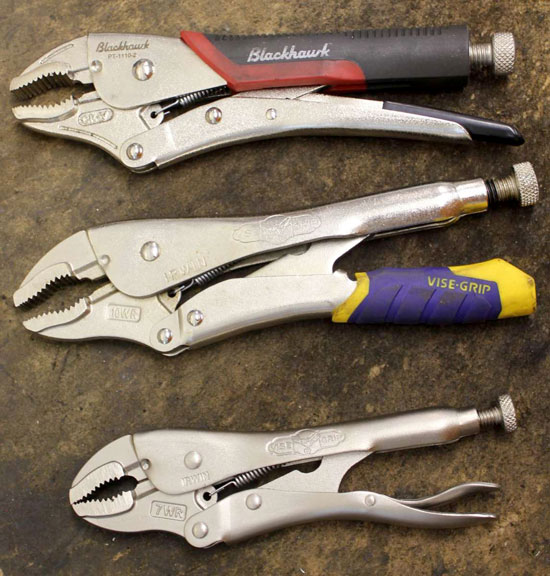 First, you should notice that the Blackhawk pliers have a Grip-On-style release mechanism where you pull up on the lever to release it.

In the middle is an example of Vise-Grip’s Fast Release locking pliers. With this style of quick release mechanism, you push down on the lower handle and it unlocks the pliers.

At the bottom is a pair of Vise-Grips pliers with the traditional lever release design used by Vise Grips and copied by many other brands. With this design you have to pinch the lever or push it down towards the movable handle while gripping the pliers.

The release mechanism on the Blackhawk locking pliers is one of the main reasons I selected them. In my experience, the main benefit of this design is that you are less likely to pinch yourself when you release the pliers. The design also allows for a more natural release motion and even one-handed unlocking. 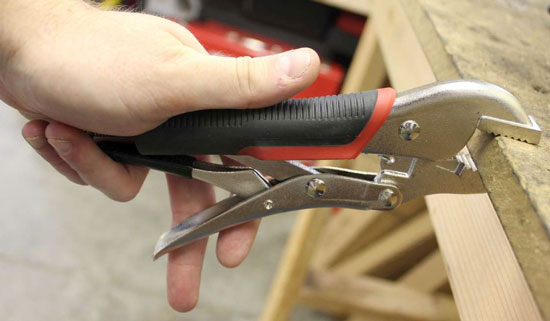 The soft grip on these pliers is comfortable, but as with most comfort grips it does get dirty and greasy pretty easily. On these grips the red portion is hard plastic and the black portion is a softer rubber material.

I used these pliers for several different tasks around the garage and house, and overall they performed pretty well so far.

I had to replace the bushings in the lower control arms on one or our vehicles. This involved drilling out several large rubber bushings and removing the center metal bushing support. The 10 inch curved-jaw pliers had no trouble locking on the supports and pulling them out. Some of the supports required quite a bit of force to remove, and I am happy to say the pliers didn’t slip or otherwise release unexpectedly. 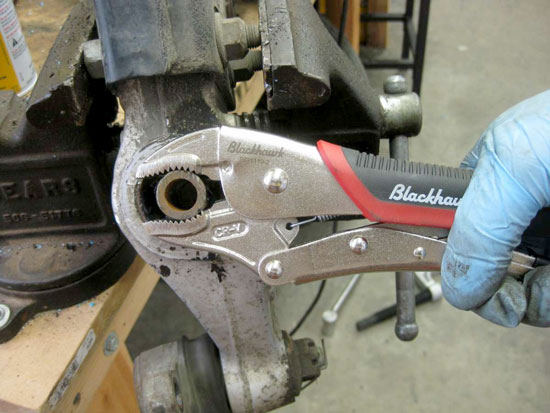 I have also used the pliers on some smaller jobs. In one such project, I installed a new hanging light fixture outside our front door, and the small pliers were easily able to grip the pieces of the chain that had to be bent open and closed to adjust the chain length. 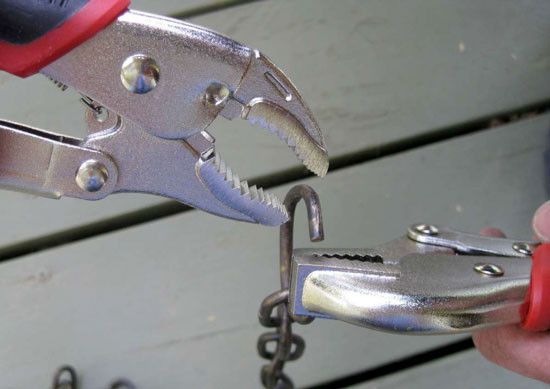 Overall, I am pretty pleased with these pliers when considering the price paid, and I think they are a good choice for do-it-yourselfers looking for a new set of locking pliers. They have some nice features found on more expensive pliers and are priced at a level affordable to most hobbyists and DIY’ers.

These pliers are available as part of a 5pc set, and can also be purchased individually.

The Blackhawk locking pliers featured in this review were purchased new at their retail price from Ebay distributor etooldirect.