ToolGuyd > Accessories > Bongo Ties, Hooked Elastic Ties, Ball Bungees
If you buy something through our links, ToolGuyd might earn an affiliate commission.

Earlier today I posted about Think Tank’s Red Whips, which are simple cable wraps made from elastic shock cord and barrel locks. I intend to make some more out of ITW hardware and USA-made cordage, but for the greater sizing flexibility and not better cost economy.

Red Whips might not be suitable for all types of tool, DIY, or construction-related cable-wrap purposes. There are other temporary solutions, such as Velcro cable ties, and nylon cable ties can be used for permanent and semi-permanent bundling.

The reason I started looking into elastic cable wraps is because Velcro ties become a hassle when you need to unwrap the same power cords on a more regular basis. If I’m bundling a cable that won’t need to be uncoiled for a while, Velcro ties are nice in that they go on relatively easily and have a very slim profile.

After giving these a try, I have found that bungee cord-based solutions are much more convenient. I should say that I’m giving these another try, as I’ve used elastic band wraps in the past.

Although I have taken a liking towards Red Whips, there are several other elastic band and cord-based solutions available.

Bongo Ties, and others like them, feature large rubber bands with a bone-shaped button attached to the end. You wrap a cable or bundle with the band, and then slip the button end through the loop.

Other brands’ buttons are barrel-shaped, but the tapered hourglass shape on these look more convenient to use. I have used ones with cylindrically-shaped barrel buttons before, and they aren’t as quick to attach and remove as Velcro cable ties or the aforementioned Think Tank wraps. 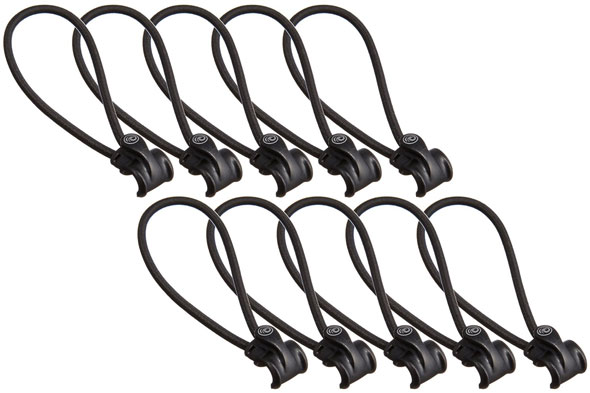 I haven’t used these Planet Waves elastic cable ties before, but they have interesting-looking hook-shape hardware that should make attachment and detachment a snap. You capture one strand of your cable or part of a smaller cable bundle with the hook, wrap the elastic loop around, and then catch the end of the loop with a raised part of the hook hardware.

I could see a potential downside with this style of cable wrap. If your cable is too large for the hook, such as with a large power cable, or too small such as with thin and flexible headphone or USB cables, then the hook might slip. These are specifically designed for use with 1/4″ diameter cables. 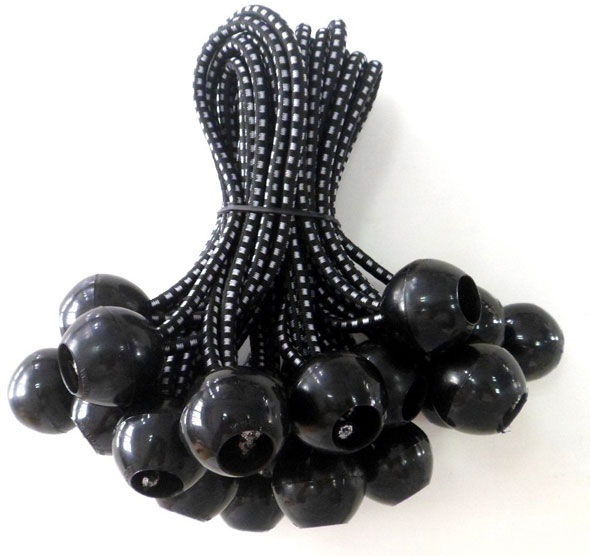 Ball bungees work similar to the Bongo Ties, but instead have a ball-shaped bead at the end. You get greater size selection with ball bungees, and they’re more widely available as well. A common application is for tying down tarps. Aside from the ball sticking out a bit more, there’s not much of a difference in using these over the Bongo Ties.

You can make your own too, all you need are some beads and shock cord, but you’re probably not going to beat these on price. The only reason to make your own is if you want different colors or lengths.

Do you use something different for temporarily taming power cables, computer cables, and cable bundles that you could recommend?

How Would You Use a Klein Magnetic Wrist Strap?