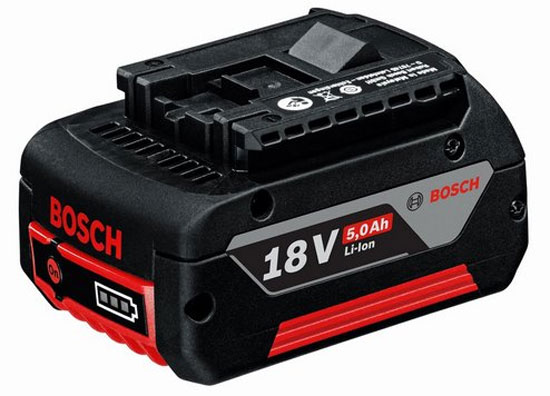 Update: Bosch’s new 18V 5.0Ah Li-ion battery was already released in Europe and will be available in the USA starting in May 2014.

Although we haven’t discussed this yet, Hitachi already came out with 18V 5.0Ah Li-ion battery packs, and we know of at least one other power tool brand that plans to release a new higher capacity 18V/20V Max 5.0Ah battery pack in 2014 as well.

The move from 4.0Ah to 5.0Ah charge capacity means 25% longer runtime without any appreciable increase in battery pack size or weight.

That Bosch is the first major power tool brand after Hitachi and Metabo to release 5.0Ah Li-ion batteries is a surprising but welcomed development.

Now, the question on the table is: who will be next? Dewalt? Makita? Milwaukee? Ridgid?

In the grand scheme of things, the order in which brands come out with next generation high capacity batteries doesn’t matter. But what does matter is that the brands all keep up with each other, because those that don’t stand out, and not in a good way. For instance, Makita’s 18V 4.0Ah battery is still at least 4 months away from release in the USA and – potential compatibility issues notwithstanding – professional users have noticed and are unhappy. Makita’s 5.0Ah battery pack is in the process of being released overseas, but there’s no USA release in sight.

You can expect for the others brands to be hot on Bosch’s heels with upgraded battery packs of their own.

We’re still waiting to learn about how long the new battery will take to charge, but it probably won’t be shorter than 90 minutes.

This post was first published on Jan 22nd, 2014, and was edited and republished on April 17th, 2014 with new information.