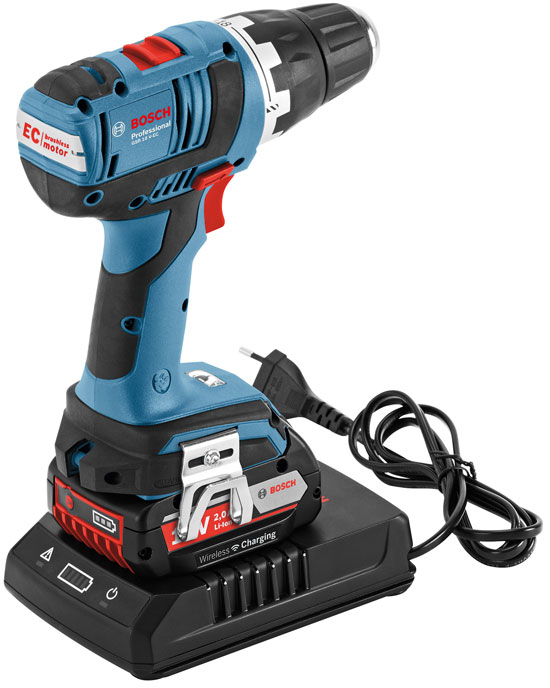 Bosch has announced that they will be launching a new wireless 18V battery charging system, which will debut in Europe starting in the Fall of 2014.

Bosch has had a very busy year, introducing a new line of 18V and 12V brushless tools, an 18V 5.0Ah battery pack, and new drills with accelerometer sensors that help reduce reactive forces that can twist your wrist. This new development is another way Bosch is taking to help increase user convenience and productivity.

The new Bosch inductive charging system will include a charger, a docking frame, and a wireless-compatible 18V 2.0Ah Li-ion battery pack.

The optional docking frame can be used to mount the wireless charger to stationary surfaces, such as workbenches or shelves, and also helps guide a tool or battery onto the charger for correct positioning.

How Does it Work?

An alternating magnetic field is created in the charger – the transmitter – which induces a current through a coil built into a wireless-charging-compatible battery – the receiver – that is placed on or in close proximity to the charger. Thus the Li-ion battery can be recharged without the need for a physical cable.

This is similar to how inductive heating works, but with inductive charging the developed current is used to recharge the batteries instead of being converted to heat. There will be some heating, but hopefully Bosch has found a way to minimize energy losses.

How Long Does Charging Take?

Wireless charging typically takes longer than wired charging, due to greater energy losses, but Bosch has said that

Initial press materials are a little vague, but it sounds like wireless charging will be accomplished in the same amount of time as Bosch’s conventional 18V chargers. We’ll know more as the wireless charging system launch nears and more details are available.

Why Should You Care? 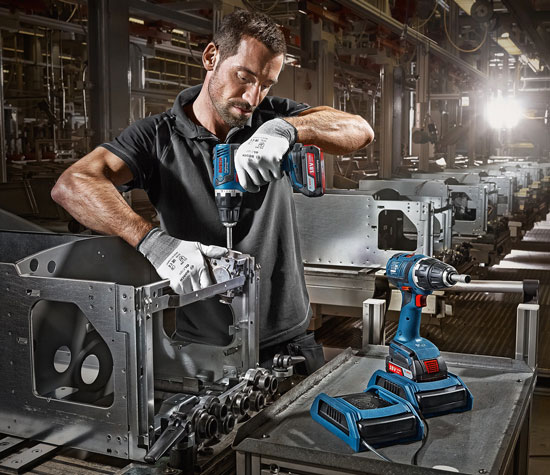 Bosch’s new wireless charging systems offers a number of advantages compared to having to remove a battery and docking it to a charger for recharging.

First, you don’t need to remove the battery from the tool! It seems that you can, if you need to use the tool right away, but you don’t have to.

This means that you could partially recharge a tool anytime it would otherwise rest idly. For example, if a worker switches between a drill and screwdriver or impact driver for different tasks during an assembly operation in an industrial environment, each time one tool is put down it could be placed on the charger. This would allow batteries’ runtimes to be stretched throughout the day

Second, because charging is done without the need for a wired connection between tool and battery, there are no contact points that could be affected by water, dust, or debris. You should be able to keep the inductive charger out in the open in environments that would be unfriendly towards traditional Bosch battery chargers.

According to Bosch’s European press materials, the company plans to add more components as part of their long-term strategy to grow their wireless charging system.

What I hope to see next is lower cost of entry where wireless charging tech is built into standard Li-ion batteries.

One thing that concerns me is that the battery and charger are said to have wireless intelligence, which is an electronic system that handles communication between the charger and battery. This is how the charging process is initiated and controlled depending on the charge level and state of a battery. The part that has me concerned is how this could be the deciding factor about whether we will see universal battery chargers in the near future.

Similar to how Bosch’s OIS oscillating multi-tool interface is now a standard that many brands adhere to, maybe it could be possible for Bosch to share and open up their wireless communication standard for other brands to use, possibly under license.

My Android smartphone recharges every night on a Qi-compatible charging pad. Users would absolutely benefit from a similar standardized communication protocol that would eliminate the need to match up multiple brands’ batteries with their respective brands’ chargers.

I am very optimistic about Bosch’s new inductive wireless charging technology. At the least it presents certain users with convenient advantages over traditional battery charging docks, and at most it could help open the door to universal battery chargers.

There are a number of good reasons why we won’t see universal or multi-brand-compatible Li-ion battery packs any time soon, but I cannot think of any good reasons why universal wireless battery chargers wouldn’t be feasible from a technological point of view.