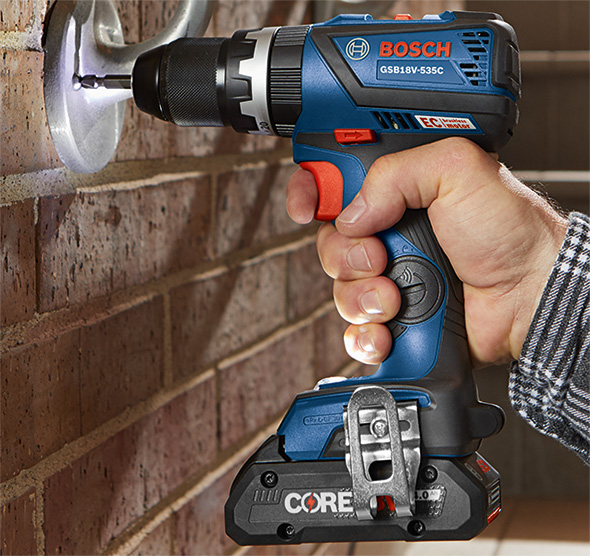 The big thing about the new Bosch compact drills is their “Bluetooth Connectivity,” via an optional module.

Some of Bosch’s prior cordless drill releases featured kickback control, but as far as I am aware, these new Compact Tough are their first compact brushless drills to feature anti-kickback measures, and also user-adjustable kickback protection.

It is my current understanding that the kickback controls are built-into the tool, by means of an accelerometer that senses sudden rotational movements. If sudden and sharp twisting is sensed, the Kickback Control feature shuts off power to the motor.

Add the optional Bluetooth-connectivity module to the tool, and the user then gets access to Kickback Control adjustments and customizations.

We have previously written about the new Bosch GDR18V-1800C “connected-ready” impact driver.

With the Bluetooth module, users can also adjust the LED “afterglow” duration, the length of time it remains on after trigger release.

Does a compact brushless drill/driver need kickback protection? Honestly, I don’t know. Personally, I would welcome it, but I don’t know if it’s as necessary as on higher-powered cordless drills. BUT, I think Bosch did the right thing to build it into the drill. You need the optional Bluetooth module to customize the Kickback Control settings, but it is my understanding that you don’t need that optional accessory for the built-in protections.

We’re still waiting on some details and pricing for the optional module.

My personal opinion is that smartphone connectivity can be useful for some tools. But for others, it’s not as critical. IF Bosch puts a lot of options into their app, tools like their new brushless impact driver can be enhanced by offering user customizations.

But for something like a compact drill? It’s not something that most users will need or want.

However, I think that Bosch’s approach is a good one. In contrast to what Milwaukee has done with One-Key, and Dewalt with Tool Connect, Bosch created their connected tool technology around a “buy the module if you need it, or not if you don’t” philosophy. And, it looks like the module might be switchable between tools, if your needs change.

The current trend is for tools to become “smarter.” The new Ridgid Octane impact driver features 6 modes, with two of those modes actually providing different behaviors for forward and reverse directions.

These new Bosch compact drills have built-in accelerometers, which seems like a nice touch.

One thing I wanted to mention is that Bosch’s announcement and press materials describe the new drills as having Bluetooth Connectivity, but they also do mention it’s accomplished via an optional module. Some reviewers, influencers, or news sources might mistakenly believe and relay that this functionality is built-in, but it’s not. That’s why in most instances Bosch describes the tools as being Connected-Ready. I have seen a couple of instances of inaccurate reporting thus far.

As mentioned, I think Bosch’s approach at providing Bluetooth connectivity via a module is a good one. It means that you can change your mind should your needs change, and the modularity should simplify production, supply, and retail inventory logistics. But it also means that Bosch will have to very tightly control how they and retailers describe and discuss the new tools.

What kind of connected tools should Bosch come out with next?