ToolGuyd > Power Tools > Cordless > Bosch Teases New Cordless Table Saw
If you buy something through our links, ToolGuyd might earn an affiliate commission. 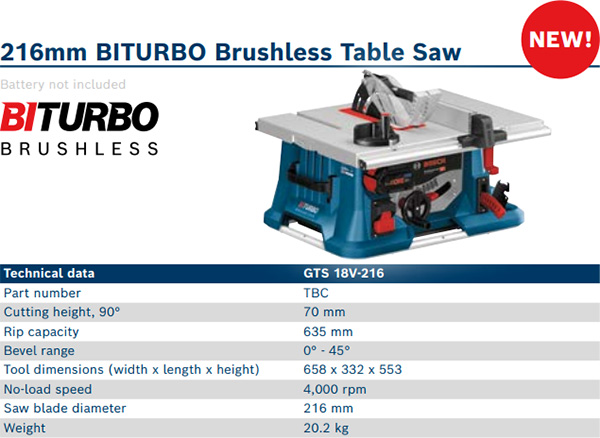 Over on social media, several people have posted about a new Bosch cordless table saw GTS 18V-216, which we tracked down and found in Bosch New Zealand’s latest product catalog.

Bosch is only the latest professional tool brand offering a cordless table saw, following on the heels of Dewalt, Milwaukee, Metabo, and Metabo HPT.

The new Bosch cordless table saw looks to be a straight-up adaptation of their GTS 635-216 corded table saw, but with a slower motor.

The corded table saw operates at 5,500 RPM, while the new cordless version operates at 4,000 RPM. Both have a 216 mm (8-1/2″) blade size. Keep in mind that these are specs for the international version – it is unknown as to whether Bosch North America will be releasing this or a different model to the USA market.

In comparison, most other cordless table saws feature a 8-1/4″ or 10″ blade size.

Metabo’s 18V cordless table saw has a 10″ blade size and operates at 5,000 RPM. What’s special about the Metabo is its built-in rolling stand.

Metabo HPT’s MultiVolt 36V cordless table saw has a 10″ blade size and operates at 5,000 RPM. The HPT can operate via battery power or MultiVolt AC adapter.

In comparison, the specs for Bosch GTS 18V-216 cordless table saw are a bit of a disappointment. It has a small blade, similar to Milwaukee and Dewalt saws, but operates at slower motor speeds, at least on paper. Metabo and Metabo HPT (formerly Hitachi) have larger blade sizes and faster motors.

Milwaukee and Metabo cordless table saws are also powered by 18V power tool batteries, while the Dewalt is a 60V Max tool and the Metabo HPT a 36V tool.

Based on product imagery, it seems that Bosch simply took their existing 8-1/2″ table saw, and changed out the AC motor to a slower 18V DC-powered motor.

Maybe there’s more to it? If not, this seems to be a lackluster offering, but one that’s necessary if Bosch has any hope of keeping up with competing brands’ expanding cordless power tool lineups.

We would ask Bosch USA for more information, but 1) they have not answered questions about whether other international tool releases would be brought to North America, and 2) given Bosch’s historical patterns it’ll likely be a long time until it launches here, and that’s IF a variant of this cordless table saw is even slated for released here.