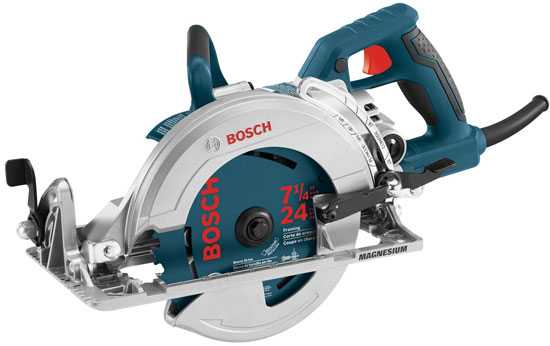 Bosch designed the new saw specifically for concrete form builders, framers, deckers, general contractors, and other types of users who are looking for a heavy duty saw in a lightweight package.

The saw is packaged with a 24T blade.

I took a look at Bosch’s current magnesium-construction worm drive circular saw, model 1677M ($192-210 via Amazon). That model has similar cutting capacity as the new CSW41, but weighs in at 14 lbs.

In other words, the new Bosch CSW41’s is lighter than Bosch’s current model and is competitive with other brands’ worm drive saws. It seems that there is not much that can be done to decrease the weight further without compromising strength or performance.

One thing I did notice was that the new Bosch saw has a faster motor than competing models. This could potentially translate to higher application speeds.

I tend to favor Bosch corded power tools over other brands’, and so this would probably be my pick if I were looking to buy a magnesium-bodied worm drive saw in the near future.