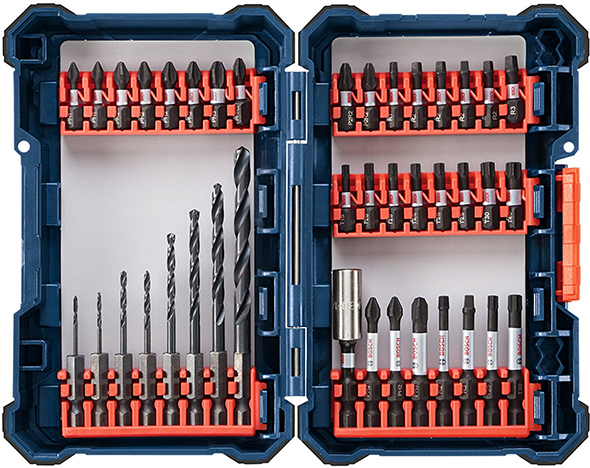 Bosch is coming out with a new Custom Case System, a modular setup for equipping and organizing your drill bits, screwdriver bits, and other such accessories.

Right now, the system looks to be limited to Impact Tough bits and accessories.

More specifically, the system is centered around a whole new line of next-generation Bosch impact-rated bits, some of which we’ve already been testing and like using. 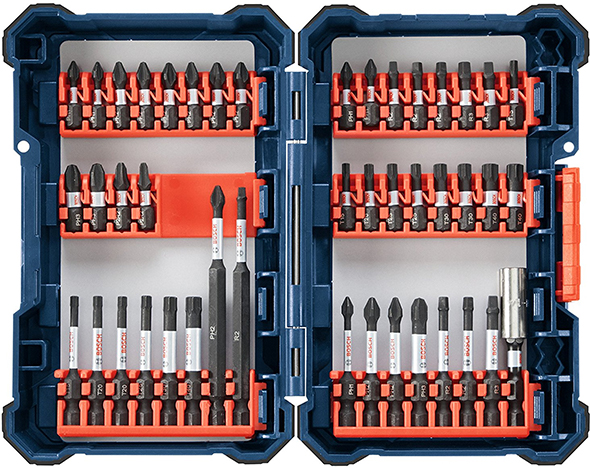 At launch, there will be several starter sets available, and the pricing looks to be quite good. Strangely, the pricing for the empty boxes and individual bit modules is quite a bit higher.

I hope that other brands’ accessories can be used with these cases and bit clips, but that’s something we’re going to need to figure out by trial and error. 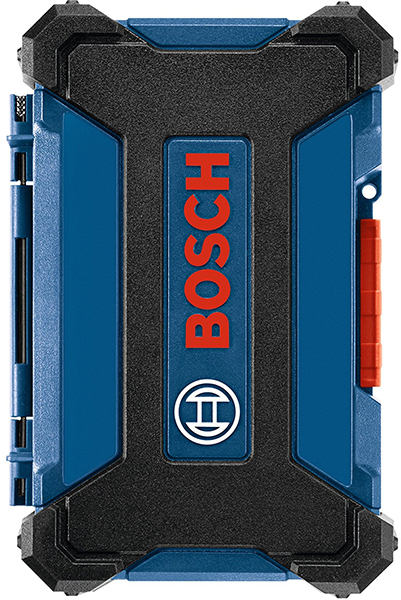 The cases, both inside and out, look to be a step up from your run in the mill plastic bit boxes. 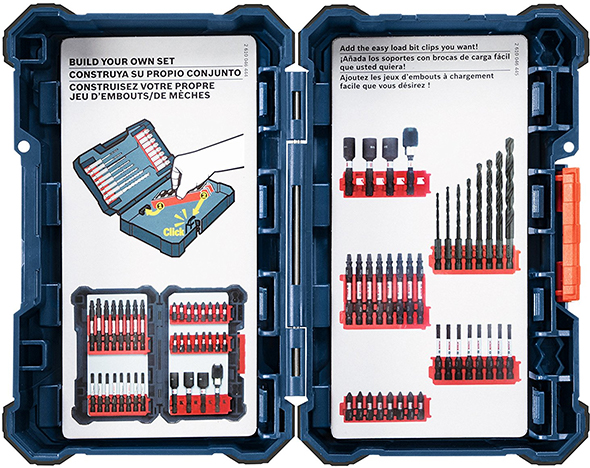 On the inside of the large case, there’s room for up to 8 rails to be clipped in, each with a quick release lever in case you want to change bit load outs or carry one bit rail separate from the rest. 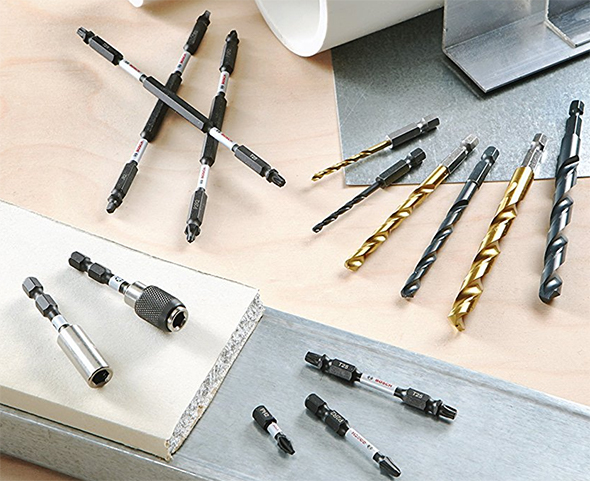 The current selection includes sets with, and accommodations for screwdriver bits, power bits – even long ones such as Bosch’s double-ended bits, drill bits, and nut driving bits.

There will be 2 case sizes available, at least to start. 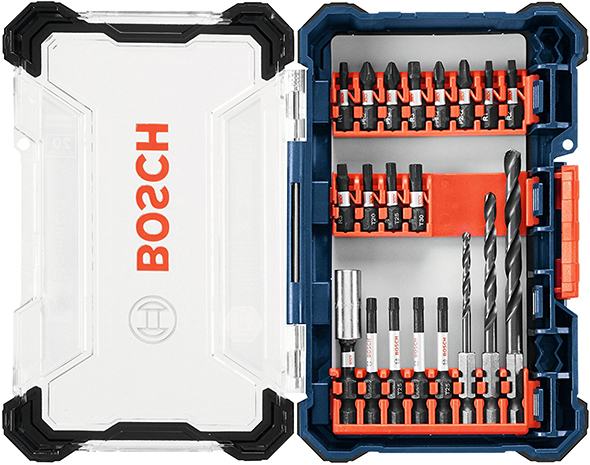 In addition to the one shown above, there’s a slimmer case with 4 rail positions and a clear window. 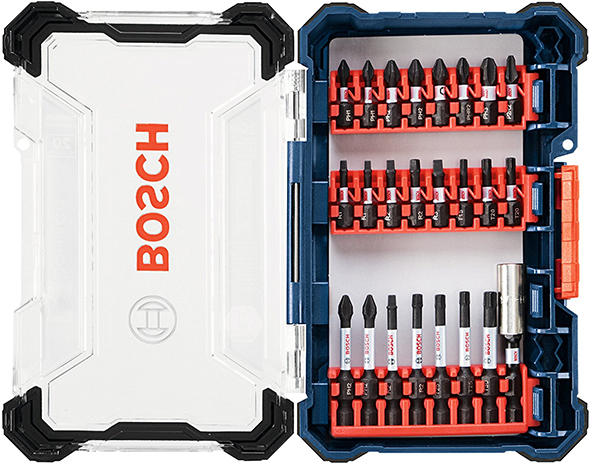 Both of the new starter sets are shown with a combination of insert bits and longer power bits or drill bits, allowing for 3 out of 4 rail positions to be used. 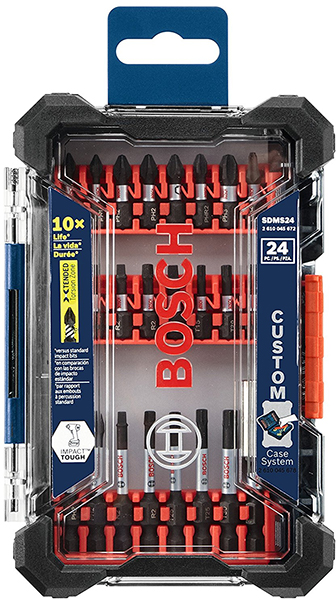 It’s the same height and width as the larger case, but slimmer.

I wonder if Bosch will expand to include additional sizes. Maybe a case that can hold 1 or 2 rails, with a belt clip on the back? A lanyard attachment system? An even larger kit with movable middle panel that has rail placements on both sides?

Some of the bit loadout modules you could buy comes with 8 insert bits. 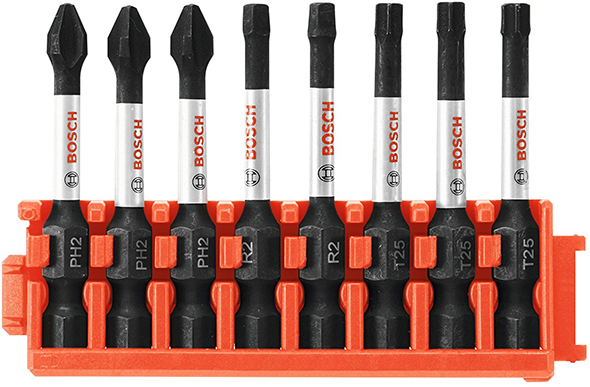 Others have 8 power bits. 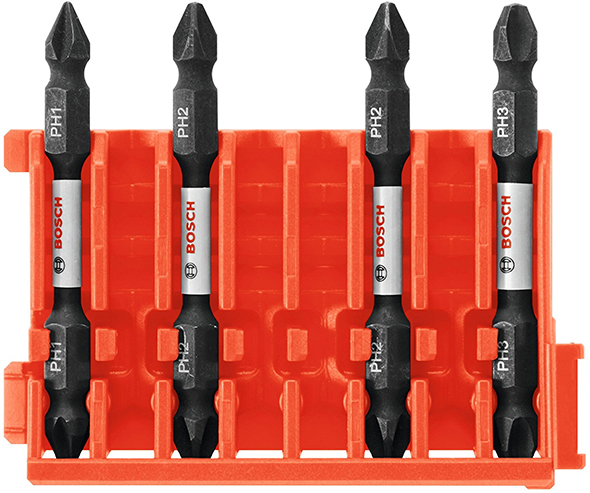 There are also double-ended bits with taller rail clip.

There are also rails loaded with nut driver bits, drill bits, or a combination of drill bits and power screwdriver bits. 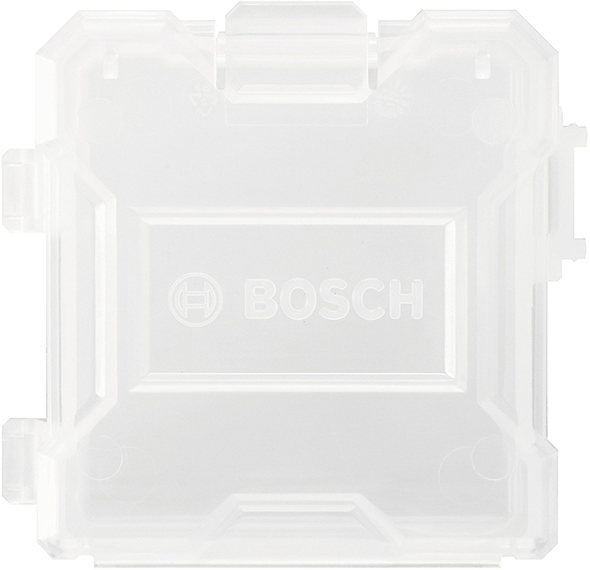 Pricing: $11-13 for the starter bit sets, including a case and bit loadouts.

As mention, the pricing is a little strange right now, with the starter sets costing considerably less than if you were to buy any of the individual system components separately. We’ll try to get to the bottom of it.

The shipping ETA is 1-2 months, which tends to be Amazon’s default for tools that aren’t immediately available but are expected to launch soon.

For the prices Amazon is listing the starter bit kits for, it’s a no-risk situation. At worst, these are reasonably priced sets of latest-generation impact-rated screwdriver bits (which I’ve tested a little and like so far), in good-looking cases. If the modular bit storage part isn’t appealing, the sets can be used as standalone sets.

At best, this new system will allow for more efficient storage and organizing of driving bits, allowing for quick reloads or bit selection swap-outs.

Realistically, the usability level will fall somewhere between those extremes for most users. In other words, assuming you like the bit selection in the starter sets, I can’t see any reason not to give the new Custom Case System or new Bosch bits a try.

Update: Bosch was able to get back to me with some prices, and from what I can see, the component costs will be a LOT lower than they’re currently listed for on Amazon, and the sets will be a little higher. For instance, the 48pc set has an MSRP of $29.99.