ToolGuyd > Power Tools > Cordless > New Bosch DDB181 Super-Compact 18V Drill
If you buy something through our links, ToolGuyd might earn an affiliate commission. 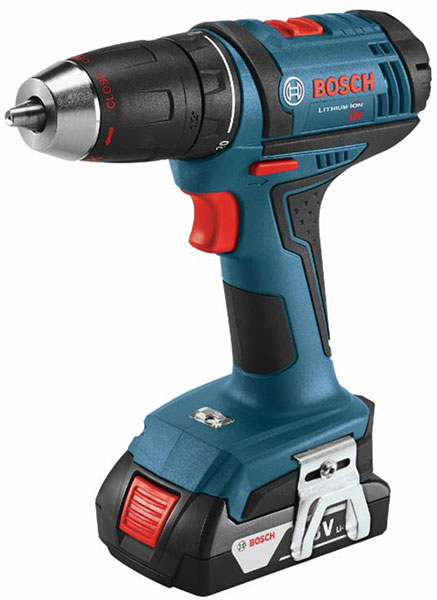 Bosch has come out with a new 18V drill, DDB181, which they say is the smallest and lightest 1/2″ drill/driver currently on the market. The new cordless drill is so compact that Bosch says its smaller than all of their competitors’ 12V drills.

I have the distinctive feeling that, although Bosch is marketing this as a “compact and light” drill/driver, it’s also intended to be Bosch’s basic (aka inexpensive) cordless drill. They’re had a couple such models before, such as the DDB180 which went on sale for $99 last year.

For 18V system users, the DDB181 fills the void for a powerful, basic-duty drill/driver with a 1/2-inch chuck for all-day work.

This, and the fact that this is distinguished by being a compact and lightweight option, gives me greater confidence that it’s more of a serious tool and not a consumer model in disguise. Dewalt’s DCD771 Black Friday special is larger and slightly less powerful than their regular model.

The new Bosch DDB181 is less powerful than their regular compact drill, but it’s also smaller and lighter.

HOWEVER, if you’re thinking of buying this as a basic inexpensive drill, think again. The Bosch 18V DDS181, which is what I own and use, has dropped in price to less than $110 via Amazon. If you want smaller and lighter, the DDB180 does look to be a good option, and it’s not very expensive. But the DDS181 is even less expensive, more powerful, and it comes with an L-Boxx storage case. But, keep in mind that the DDS181 kit comes with one battery, at least at the ~$110 price, while the DDB181 kit comes with two.

If I had to guess, I’d say that the DDB181-02 will be Bosch’s answer to Dewalt’s $99 Li-ion cordless drill kit. We’ll know for sure in just a couple of weeks.

If you don’t really need the small size and light weight of the DDB181, but are interested in the drill and impact driver combo, consider the CLPK234-181L drill and impact combo for $210 via Amazon. That combo has the more powerful DDS181 drill and the same IDS181 impact driver, but it also includes two L-Boxxes for only $10 more.

The DDB181 definitely has its place in Bosch’s lineup. While I am biased in favor of the DDS181 I use and love, I think the DDB181 will be the choice for users who want a solid “basic-duty” 1/2″ drill/driver.