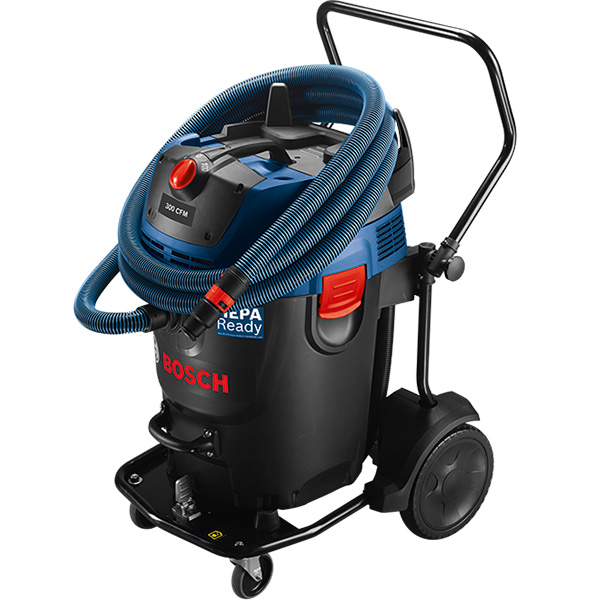 Bosch has come out with a new dust extractor vacuum, GAS20-17AH, which they’re calling a powerhouse wet/dry vacuum for heavy-duty extraction.

It features a 17 gallon capacity, 300 CFM airflow, and can provide enough HEPA-grade suction power to connect it to two tools simultaneously. It also has a reverse airflow automatic filter clearing system.

Bosch says that their new dust extractor vacuum can be used for heavy-duty applications, including concrete cutting and surface grinding, even with 7″ and 9″ grinders, and cut-off tools up to 12″.

The vac is bundled with a HEPA filter, (1) 3-layer filter bag, and 16 ft anti-static hose.

If you want to connect two tools to the vac, you’ll need a Y-connector, sold separately. It’s recommended that only smaller tools, such as 5″ or smaller grinders, are used in such a manner.

Well, this certainly looks to be an impressive addition to Bosch’s dust extractor vacuum product family.

It comes with a HEPA filter, and 5 filter bags (according to Bosch’s specs page), a nice sized hose – and anti-static too, and long power cord. A Y-adapter isn’t included, but you do get a power tool adapter, and some basic cleanup wands and accessories.

The wheeled frame looks large, but the fold-down handle and “dumping” function sound convenient. There’s also a handle on the front.

For wet pickup tasks, the discharge drain hose could be useful.

The Bosch GAS20-17AH is priced considerably higher than their smaller dust collectors, but it also seems to be much more capable.

There doesn’t look to be any automatic activation mode, at least that I can see in the provided photos or in Bosch’s press release and official specs sheet. Such a mode would allow for automatic vacuum activation when a plugged-in corded tool is turned on. That might be because of how much power the vacuum draws.

Speaking of power, it has a “standard 20A plug.” That will make things difficult for anyone looking to work at residential jobsites. At present, I don’t have any 20A receptacles. Few people have 20A receptacles at their homes and garages. Some commercial settings might not have them either. That could be a problem if you show up, ready to do some work, and you realize that there’s no place to plug in your vac.

But if you’re on a site and there’s a generator, or some other feed with 20A receptacles, you’re in business.

No wireless activation? I retrofitted my Festool CT dust collector vac with their Bluetooth remote (thanks, Festool!), and it has been working beautifully with cordless power tools, and corded tools that pull too much current to plug into the vac’s auto mode port.

A $1500 vac that’s hailed as a powerhouse for heavy-duty applications should have a wireless remote, in my opinion. It has a 16 foot hose, which could mean long trips back and forth every time you want to turn the vac on and off. I suppose one could just leave the vac running for a while.