ToolGuyd > Power Tools > Cordless > New Bosch 18V Impact Driver IDS181
If you buy something through our links, ToolGuyd might earn an affiliate commission. 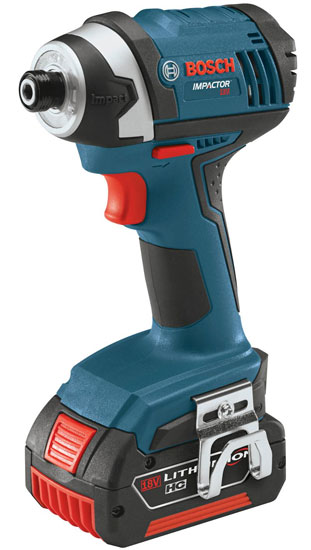 Bosch is adding a new compact impact driver, model IDS181, to their 18V lineup. They updated their drills and drivers fairly recently, about a year ago, and the new driver is designed as an expansion model, not an upgrade. It boasts a new compact size and a medium-duty motor.

Bosch’s marketing team says that the lower power rating helps the IDS181 impactor achieve best-in-class application control by limiting stripping of screws and shearing off of screw heads. While this sounds like a BS way of saying less max-power means less over-torquing, a smaller power range could allow for more sensitive trigger control.

Bosch also built the IDS181 with a 3-LED shadow-free worklight, similar to that on their 12V PS41 impact driver. There are actually strong resemblances between the IDS181 and the PS41, which is also 5.4″ long.

Electronic motor and battery protection is built into the tool as with Bosch’s other 18V cordless tools.

Our take on the new impact driver is that it’s designed to bridge between 12V and 18V systems. It’s not a super heavy-duty driver, but this is balanced out with greater runtime.

The -102 kit seems to be a lower-priced entry to entice first-time impact driver buyers. If true, it’s a smart approach.

There are a number of premium models currently on the market, most notably Dewalt’s brushless impact, Milwaukee’s Fuel impact, and Bosch’s own 25618. Even with a more modest power rating, the IDS181 undercuts them on price and potentially runtime.

It will be interesting to see how the latest and greatest all perform. If there’s enough reader demand we’ll do some comparison testing later this Fall.

And we know what you’re thinking – when will Bosch catch up to their competitors with a brushless model of their own? Our guess is soon.