ToolGuyd > Power Tools > Cordless > Bosch Kicks Their 18V Battery Tech up to 7.0Ah and Further
If you buy something through our links, ToolGuyd might earn an affiliate commission. 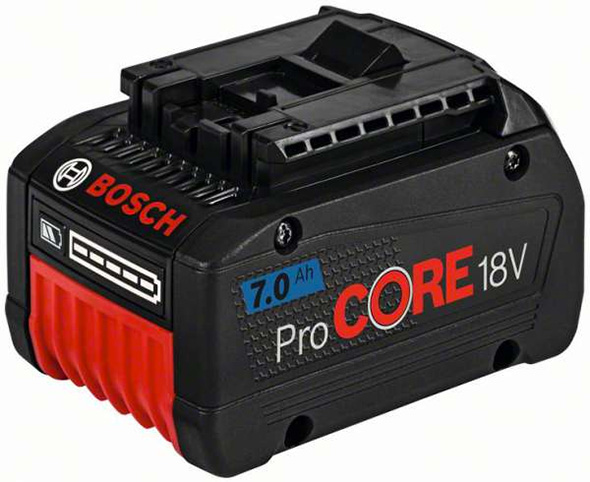 Bosch’s 18V Core 6.3Ah battery pack is pretty powerful. They’ve kicked it up another notch, and are coming out with a 7.0Ah battery pack, at least in Europe.

Bosch has taken their “CORE” form factor, or in this case ProCORE 18V form factor, a larger pack built with larger cells but still compatible with their 18V tools and chargers, and extended it to new compact and even higher capacity battery packs.

The FatPack form factor is now considered a universal size, and it’s flanked by compact and endurance sizes.

Bosch has not identified the capacities of their compact and endurance battery packs. I would be remiss if I didn’t acknowledge that Bosch could very well be the first brand to come out with a 3.5Ah compact pack and 10.5Ah very high capacity battery pack.

With the “universal” battery pack rated at 7.0Ah, it means that Bosch is working with 3.5Ah cells. They *could* therefore manufacture 3.5Ah and 10.5Ah battery packs.

As for the 7.0Ah battery pack, Bosch says that it will lead you to “Redefine Your Limits.”

It can deliver 87% more power than their 6.0Ah battery pack (based on the 18650 cell size), and is 28% more compact the competing brands’ latest generation battery packs, notably the Metabo 6.2Ah pack, Dewalt FlexVolt 6.0Ah pack, and Milwaukee 9.0Ah battery pack.

Umm… they’re comparing the 7.0Ah to “competitors in the high performance class,” but why oh why are they comparing a 10-cell battery to Milwaukee 15-cell battery pack and Dewalt’s lower capacity first-launch 15-cell FlexVolt battery pack?

I want to know how the new ProCORE 7.0Ah pack compares to the new Dewalt 20V Max 6.0Ah battery pack. And how their new endurance 15-cell pack (I’m assuming) will measure up against competing 15-cell packs.

Anyways, about that 87% more power claim – the translation says that the 18V 6.0Ah battery pack has a continuous current rating of 48A, and this 7.0Ah pack has a rating of 90A.

Under ideal conditions, that would mean 1620 watts of power.

48A for the 6.0Ah pack? That’s actually a lot more than I anticipated, based on on-paper specs.

But as I learned sometime last year, keeping a battery pack cooler can allow its output to exceed its on-paper output specs.

I would guess that the 6.3Ah pack’s continuous current delivery rating is somewhere between those for the 6.0Ah and 7.0Ah packs, probably closer to that of the 7.0Ah pack.

7.0Ah isn’t a huge step up from 6.3Ah, but it’s a notable one, especially if the compact and endurance packs break present day charge capacity barriers.

These new battery packs will no doubt be pricy.

It’s good to know that the new 7.0Ah pack will be 100% compatible with Bosch 18V tools, and I’m guessing the same is true for the compact pack. The endurance pack? That will remain to be seen. There could very likely be a few exceptions because of the larger pack’s size.

Of course I’m thrilled to see these next-gen battery packs from Bosch. At the same time, I can’t shake another thought from my mind – what other brands are currently working with these cells?

Do these Bosch cells have a 20700 form factor, or perhaps 21700? 21700 is the size that Milwaukee is most likely still working on, unless something has changed.

Bosch has not yet announced the capacities for their ProCORE compact and endurance packs. We know that they’re using 3.5Ah cells in their 7.0Ah pack – or at least it’s a very reasonable presumption.

Maybe they’ll go a little less in their compact pack. Perhaps not.

Perhaps they’ll go even higher in their endurance pack.

All speculations, guesses, assumptions, and uncertainties aside, one thing is definite – Bosch has raised the bar. Precedents are important, and this is a big one.

I don’t doubt the strong likelihood that (2) 4.0Ah packs will be cheaper than (1) of these 7.0Ah battery packs. But the 7.0Ah should be able to handle higher current drains, at the least resulting in a cooler-running pack.

There exists the possibility that a 7.0Ah pack could run for longer than (2) of the “regular” packs with 7.0Ah or more of combined charge capacity.

The last I checked, Dewalt’s 20V Max 6.0Ah pack had a better per-amp-hour cost than their 5.0Ah and 4.0Ah packs. But that doesn’t look like it’ll be the case for this 7.0Ah battery pack, which is currently priced at 199 Euros excluding VAT, or around $237 USD.

It’ll definitely be interesting to see where this takes the industry.

What concerns me is that Bosch talks big, and then bigger, and then fails to deliver – at least in the USA market. Maybe that “connected tools” example is on the extreme end of things, but it still gives rise to caution, keeping my optimism in check.

Update: Whoops, I completely forgot! Metabo beat Bosch to the punch. I caught glimpse of their 7.0Ah battery back in June, and saw mentions of the 3.5Ah compact battery pack as well.

Okay, so that would mean Bosch and Metabo are both working with 3.5Ah cells. How long until other brands follow?