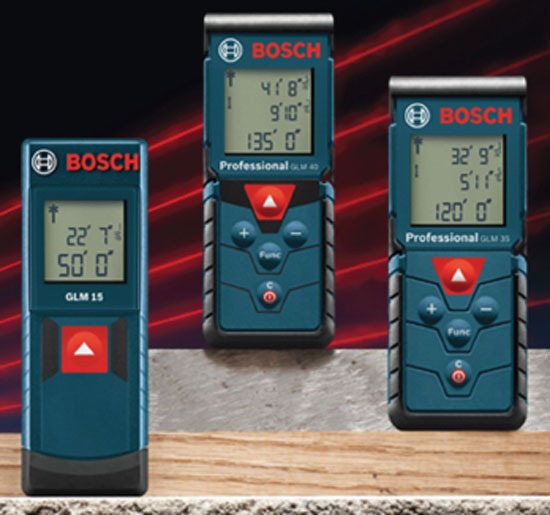 Bosch’s GLM 15 laser distance measuring tool is a super-compact and pocketable bare-bones model that’s a far cry from the bulky fully-featured laser measurers that must be worn on your belt or stowed in a tool bag. It’s as basic a laser measuring tool as you can get, and it’s just $50 (via Amazon).

Bosch revealed in their recent consumer email that there will be 3 new additions to their compact laser measuring tool range, and we dug up additional details on them. In addition to being better featured than the GLM 15, the new models are slightly more accurate as well: ± 1/16″ vs. ± 1/8″ for the GLM 15.

The GLM 30 has a range of 100 ft and sports a new backlit LCD display. Additional measurement features include area/volume, indirect measurements, and plus/minus operations.

The GLM 35 is nearly identical to the GLM 30, but has an extended measuring range of 120 feet.

This model is currently available for $100, which is the same price as the larger GLM 50 (via Amazon), which has a range of 165 feet and a couple of extra features such as changeable reference points.

I like the small size of the GLM 15, as well as its simplicity, but it’s a little too bare-bones for a lot of things. On the other hand, its price is incredibly appealing, and there’s nothing quite on the market like it. The only other name-brand models that approach the GLM 15’s price point are Stanley’s laser distance measurers, and even theirs start at $55 (via Amazon).

The new models cost a bit more than the GLM 15, but they offer greater functionality that I’ve been missing with the GLM 15. They’re not fully-featured, but look to come pretty darned close.

I think that the GLM 30 is a nice step up from the GLM 15. The GLM 35 will be more appealing to those who need greater range, and the GLM 40 has that memory functionality.

One thing that I’m concerned about is the size of the new laser distance measuring tools. In most of the images, the GLM 30, 35, and 40 look to be almost as svelte as the GLM 15. But in angled views, they look appreciably chunkier to the point where they don’t look very pocketable at all. The same can be seen in Bosch’s promo videos:

While they don’t look quite as large as Bosch’s prior laser distance measurers, the new models aren’t quite as compact as the GLM 15. This is understandable, as more functionality means more electronic guts and a larger screen, but it’s still somewhat disappointing.