ToolGuyd > Power Tools > Cordless > New Bosch LED Worklights – Compact 12V Max and 18V with Pivoting Head
If you buy something through our links, ToolGuyd might earn an affiliate commission. 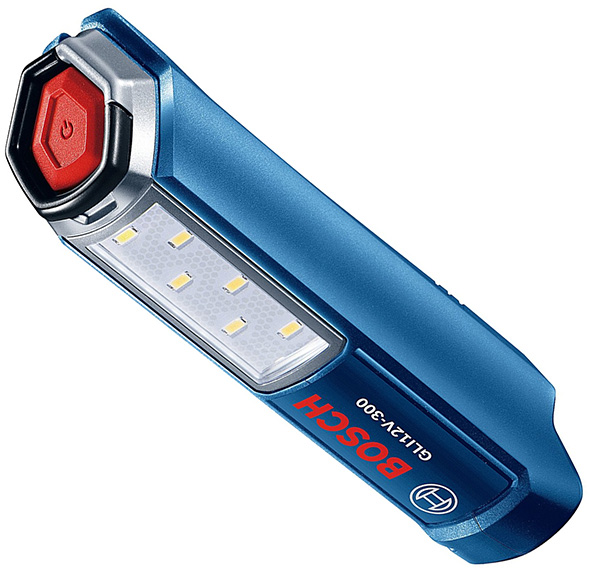 Bosch has come out with 2 new LED worklights. Both seem to have the same lighting characteristics, with differences in the worklights’ sizes and physical features.

First up, the GLI12V-300N, a compact 12V Max LED worklight that bears resemblances to the Milwaukee M12 LED Stick Light.

The Bosch GLI12V-300N delivers 300 lumens and 180 mins of runtime for every amp-hour of battery capacity. In other words, a 12V Max 4.0Ah battery pack will keep the flashlight running for 12 hours. Even a 2.5Ah battery pack will lighten up your work for 7.5 hrs, which might be enough to get you through a work day.

It has a 6-sized design. You can stand it up vertically, or on its difference faces (well, except for the face down) to provide light at different angles. It also has a hanging hook.

It delivers 300 lumens of light, as with the 12V Max model, but 300 minutes of runtime for every amp-hour of battery charge. A compact 2.0Ah battery pack will power the light for around 10 hours.

Like the 12V Max worklight, this one also has a hanging hook.

There aren’t many details about the articulating head, but Bosch says it can hold up for storage and “carry-along convenience.” I’d definitely give Bosch bonus points if the worklight folds closed.

It looks like there’s a button on the side of the worklight for locking and adjusting the pivoting head.

Just thinking aloud here, but can you imagine if you could take the LED head off the 18V worklight and pop in a 12V Max battery pack? That would be pretty neat.

Both worklights are said to deliver 300 lumens of light, with the 18V model offering longer runtime and a pivoting head. The 12V Max version still offers very decent runtime.

There are no brightness settings? While runtimes of 3 hours and 5 hours per amp-hour, respectively for the 12V Max and 18V worklights, it seems quite easy to get a whole day’s work out of a single carefully-selected battery pack.

These look to be nice new LED lighting options from Bosch, and they’re reasonably priced. 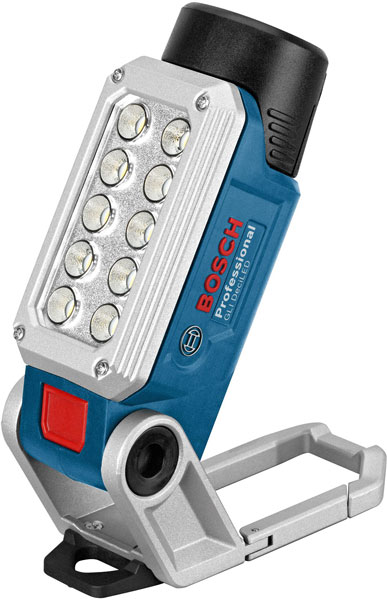 I’m a big fan of Bosch’s FL12 LED worklight, which has an articulating head, strong magnetic base, carabiner clip, nail hook, and apparently it has a 1/4″ tripod screw that I either forgot or never paid attention to. It “only” delivers 330 lumens, which is bright enough for anything I’ve ever used my test sample for, and can last for up to 6 hrs with a 2.0Ah battery pack.

Correction: The FL12 delivers 330 lumens of light, not 200. Its articulating head has a 200° adjustment range.

I’d hate to see the FL12 replaced, and don’t think it needs to be updated.