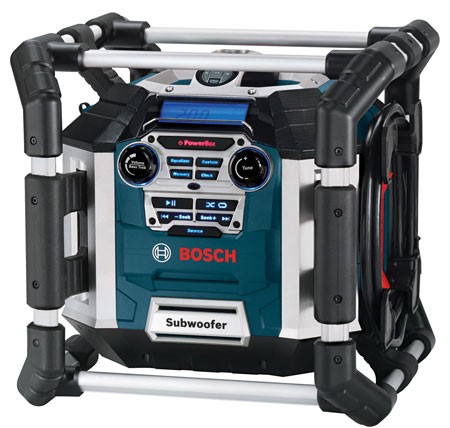 A few weeks ago, we talked about Bosch’s new Power Box 360 music/power center, and how it claims to “re-define” jobsite sound. The new Power Box 360 features four speakers and a subwoofer, modern media connectivity options, and quite a few snazzy features. While that sounds great on paper, how does the Power Box 360 perform? In short, it’s FANTASTIC!

We recently had the pleasure to review the new basic version Power Box PB360S. No, we didn’t throw it down a flight of concrete stairs (yet), but we did put it through a rather rigorous evaluation.

With a 14.5″ x 14″ x 13.5″ frame and 25 lb weight, the Power Box 360 is a bit bulky but still highly portable. Once you wrap your hand around the large comfortable handle, you forget all about its weight.

Here’s a full breakdown of the Power Box’s features:

Bosch claims that the new Power Box can be used anywhere, charge anything, play everything, and be heard everywhere. With its aluminum and rubber roll cage and weather resistant design, the Power Box 360 can certainly endure tough jobsite conditions complete with moisture, dust and debris. Although designed for the jobsite, the Power Box 360 is just as at home out on the deck for a barbecue, down at a campsite, or on a shelf in a home garage or shop.

On first inspection, we were very thoroughly impressed with the indestructible look and feel of the Power Box 360. Suspended within a sturdy aluminum roll cage connected to the unit with thick pieces of hard rubber, the Power Box 360 can, without a doubt, endure quite a bit of shock impact. We checked out the older Power Box’s specs, and it is said to be rated for 10 foot jobsite drops. If its predecessor’s wimpier design can handle a 10 foot drop, I can only imagine what this one can absorb!

Bosch did an exceptional job of guarding and protecting the Power Box 360’s various plugs and ports from the elements and jobsite conditions. Most audio ports are hidden inside the multimedia bay, while an input, line-out and the 12V DC car adapter charger are on the outside. These external connections are all protected by rubber plugs that actually feel quite robust and durable.

Both the multimedia bay and battery charging bay are protected by latching plastic doors, complete with easy to clean rubber seals. The four power outlets are in turn protected by two rubber-lined plastic doors that are spring-closed.

Bosch did a phenomenal job of weatherizing the Power Box 360’s various ports and compartments.  The same goes for the plugs and knobs on the front of the unit – nothing is getting in there under normal or even unanticipated operating conditions. With an IP dust and moisture resistance rating of 54, the Power Box 360 is dust protected and can resist splashing water from all directions. (See Wikipedia for more info.)

The sound that comes out of this unit is incredible. 360° sound? Definitely, and it can project crisp volume at a reasonable distance. At a distance of about 10-20 feet, the unit was kept at a volume of 5-9 out of 20. No distortion was heard at higher volumes.

I think that the subwoofer is definitely a nice addition, but its performance fell a little shorter than expected. The sound quality of the Power Box 360 is definitely improved by the sub’s presence, but the bass didn’t sound or feel as anticipated. Overall, I was still very pleased with what I heard.

The controls on the front of the unit have a responsive soft rubber feel and are easy to press with gloves on. On opposite sides are two knobs, also easy to operate with a gloved hand.

We tested every audio connection of the Power Box 360, and they all worked flawlessly. The only thing I did not like about the media bay was that my smartphone was barely too large to fit. FM and AM radio sounded clean and crisp, with only one weak FM signal requiring a few seconds of antenna adjustment.

You can connect a portable MP3 player to the Power Box 360 with the included 1/8″ stereo audio cable, or load MP3s onto an SD/SDHC card or USB flash drive.

The easiest way to get your tunes into the Power Box 360 will be with an SD card or USB drive; all you need to do is simply drag and drop your MP3 files onto the card or flash drive, and you’re good to go. You may want to keep the included audio cord stashed inside the unit in case a friend of colleague wants you to plug in their MP3 player, cell phone, or other device with a standard headphone jack.

Bosch’s Power Box 360 totally rocks! The sound was very impressive for a jobsite radio, but its subwoofer was slightly disappointing given my enormously high expectations. Bosch provided enough independent audio connections that anyone could have asked for, and all worked effortlessly. Slap in a USB drive, SD card, and portable music player, and you can cycle through the inputs without having to open up the media bay.

The Power Box can be powered with a 14.4V or 18V Li-ion battery, and serves as a charger when plugged in. Since I don’t have any Bosch Li-ion batteries on-hand, I couldn’t test charging times or battery life. Upgrade to the deluxe version and you get 4 GFCI outlets instead of 4 standard ones.

What more can be said? Bosch’s Power Box 360 looks good, sounds great, and challenges you to drop it down the stairs while you throw dust and water at it. We highly recommend it!

We reviewed the basic version. Upgrading to the Deluxe version gets you backlit control buttons, a remote control, GFCI outlets and a Sirius satellite radio dock.

Bosch unconditionally provided the product sample featured in this review.  Review samples are typically given away, donated to a local charity, or in certain cases retained for future review/benchmarking/comparison purposes.