ToolGuyd > Power Tools > Cordless > New Bosch Power Box 360C Radio and Charger with Bluetooth
If you buy something through our links, ToolGuyd might earn an affiliate commission. 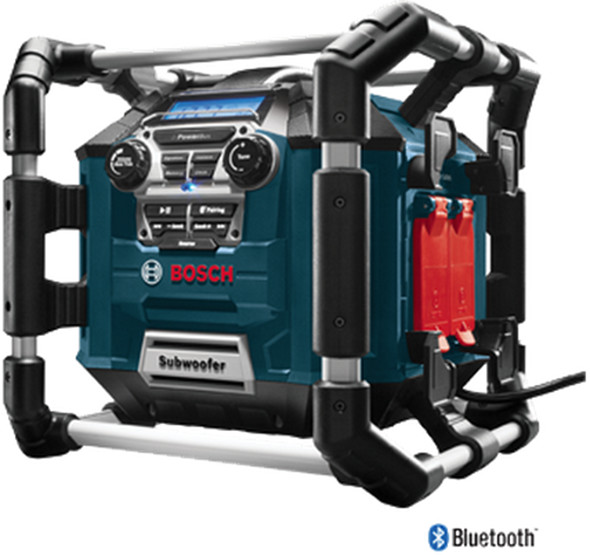 Back in February, I spotted a Bosch Power Box 360 radio on Arrow. At the time, I asked Bosch about it and whether a new Power Box radio was coming out, and they basically said no. Well… that has changed. A reader sent in info that there’s a new Bosch Power Box 360C, with Bluetooth, that’s coming out just now.

I reviewed the Bosch Power Box 360 when it was first released, and really liked it. It’s a beast of a jobsite radio, and it can charge Bosch 18V Li-ion battery packs, and it has 2 covered outlet ports. Although a somewhat large and heavy radio, it delivery clear sound and the added functionality makes it so much more than just a jobsite radio or speaker.

From the specs and looks of it, the new Bosch 360C isn’t much different from the 360S or discontinued 360D. One thing to note is that, in addition to the Bluetooth connectivity, it is said to work with a free Bosch PowerBox app.

I’m guessing (and hoping) that the PowerBox app will allow for greater control than what you get with typical Bluetooth radios and speakers. Generally, with a Bluetooth speaker, you only get some level of volume adjustment.

Maybe the PowerBox app will allow for changing the radio station from your smartphone, checking as to whether a battery is fully charged, and things like that.

Update: I’m a little surprised – the PB360C is currently priced at $199, which is fantastic, considering that it’s only a little higher than the current street price of the non-Bluetooth version.

Thanks to Steve for the heads-up!

Check out more of our jobsite radio previews and reviews!