ToolGuyd > Power Tools > Cordless > Bosch Profactor Cordless Power Tools Teaser
If you buy something through our links, ToolGuyd might earn an affiliate commission.

Meet the Bosch Profactor cordless power tool system, which Bosch says they will be announcing in February 2021.

2 years ago, Bosch introduced a new line of high-performance cordless power tools, dubbed the MegaWatt Crew. Most of those tools have not yet launched.

We were recently optimistic that the new Bosch 18V brushless circular saw was about to be released, seeing as how it was available for preorder on Amazon, but the listing was pulled.

Well, now we know why.

Bosch has officially announced that a new line of Profactor cordless power tools will be coming soon. They have not provided many details yet.

It looks like the new Bosch cordless miter saw that recently launched in Europe will be included in the Profactor system. 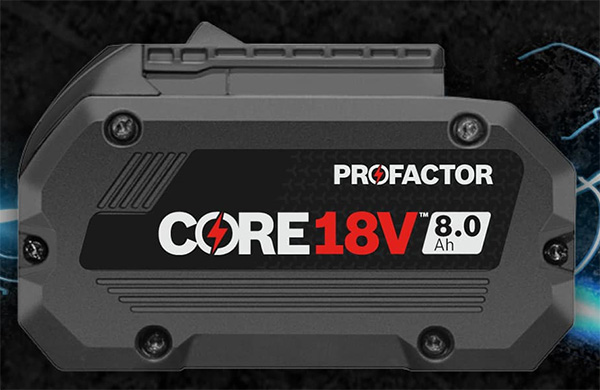 The new Bosch PROFACTOR cordless power tools feature BITURBO brushless motor technology and will be powered by CORE18V batteries. Bosch did not provide any details about what any of this means.

We know that Core18V batteries are their larger form factor batteries, similar to Milwaukee High Output and newer Dewalt XR Li-ion batteries. These and other brands’ higher performing cordless power tool systems have been available in the USA for several years now, with a steady expansion of new tools.

The first wave of PROFACTOR offerings will be available for preorder beginning January 5, 2021.

The “first wave” of Bosch Profactor tools are expected to start shipping in February. There is no information about which tools will be included in this initial launch.

Bosch says that press and media details won’t be available until February 2021, at which time there will be a full announcement.

Coming soon, our new cordless high power solution offers much more than just “big wattage”. Power. Runtime. Heat management. Fast and faster turbo charging. All powered by our best battery technology in our CORE18V platform. PROFACTOR is engineered to tackle the toughest, grittiest and most brutal applications on the job.

Not to mince words, but I’ll believe it when I see it. Bosch has been all talk and no substance for a while, and we have all but run out of excitement and optimism.

I posted about Bosch’s CORE18V 12Ah battery over a year ago, asking what cordless power tool tech it might unlock:

Shortly after that post, Bosch USA emailed me, saying they wanted to share some information about this. That was 13 months ago; they never followed up.

Bosch is going to have to deliver big with this new system, not just with respect to power, features, or performance, but on timing.

It’ll be interesting to see what their plans are.

Here is Bosch’s introductory video from a month ago: