ToolGuyd > Power Tools > Saws > Bosch Updated Their 10″ Table Saw with a New Switch and Greater Rip Capacity (4100XC-10)
If you buy something through our links, ToolGuyd might earn an affiliate commission. 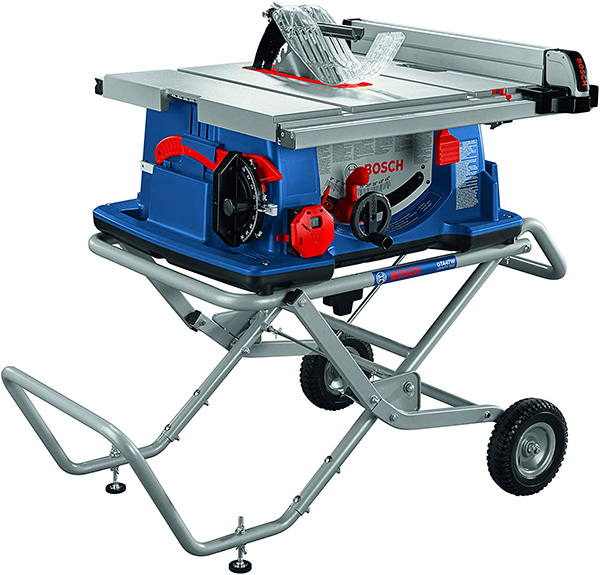 Over at Amazon, there’s a listing for a new Bosch table saw, 4100XC-10. Bosch has not officially announced the new saw (at least not that we’ve seen), and so we’re trying to piece together how this new saw is different from the 4100-10 table saw Bosch launched in 2018.

Visually, the new on/off power switch looks massive. Instead of the smaller plus-shaped switch on the 4100-10, the switch, or at least the user-interface component, is a larger red hexagon, reminiscent of a stop sign. This should make it easier to turn the saw off in a hurry, if needed.

There aren’t any other visual differences that I can identify, but a quick look at the specs shows that the rip capacity increased, from 25″ to 30″.

At this time we don’t know if the 4100XC-10 will be replacing the 4100-10, but it’s possible if the updates and changes were brought about by updated safety guidelines. If you recall, Dewalt has come out with a new 8-1/4″ jobsite table saw. Dewalt’s smallest 10″ table saws are discontinued, and it is expected that inventory levels won’t be replenished once those saws sell out.

Thus, if I had to guess, I’d be led to believe that the 4100-10 is on the way out, and the 4100XC-10 its replacement. If true, the question then is whether it’s worth it to buy the outgoing model, with smaller power switch and lower (but still sufficient for most) rip saw capacity, or to spend more for the new model.

But let’s be real – the $190 price difference between the two saws is quite substantial. The best thing about the 4100XC-10 might be the hefty discount it enables Bosch to apply to the 4100-10.

Looking deeper, it seems that at least one other retailer has the previous Bosch table saw at $409.

A couple of more differences become apparent after looking closely at the new saw’s technical specs.

Lastly, there’s mention of restart protection, which means that if power is disrupted to the saw, it won’t unintentionally start back up once electrical power is re-engaged. Thus, the 4100XC-10 doesn’t only feature a new switch button, it has an updated switch.

Restart protection? Let’s say you have the saw plugged in to an outlet, and the switch is turned to the “on” position and you begin to operate the saw. You our someone else plug another high-draw tool into the same circuit and trip the breaker. You walk over to the breaker and turn it back on. Without restart protection, power returns to the saw and the blade spins up on its own. With restart protection, this doesn’t happen.

If Bosch’s new table saw works in the same manner as other tools with auto-restart protection, users would have to turn the switch to the off position and then back on in order to restart the saw.

Generally, auto-restart protection is provided by a relay or specially-featured power switch with a built-in electromagnet, such as the E-Switch KJD17 (product page).

There could be other differences, but as mentioned Bosch hasn’t provided any press materials or announcement details. We’ll follow up to see if there’s anything we missed.

Seeing as how the 4100XC features updated safety features, namely the restart protection, and how the table size could have been increased to comply with updated safety guidelines, and that this saw is priced at the same $599 price that the 4100 was previously at, it’s highly probable that the 4100XC-10 is replacing the 4100-10, and that once the latter sells out, only the 4100XC will remain. This might be a good opportunity to snag the older model at a steep discount.