ToolGuyd > Power Tools > Cordless > New Bosch Wireless Charging L-Boxx Bay
If you buy something through our links, ToolGuyd might earn an affiliate commission. 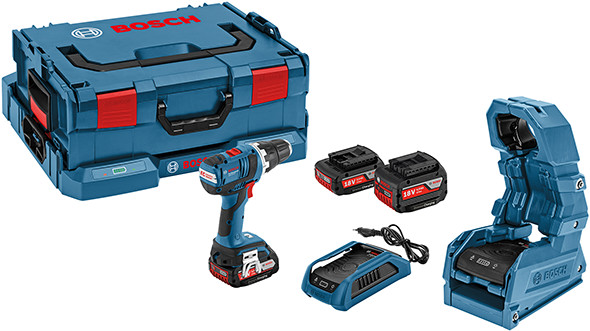 Bosch’s wireless inductive charging system, which allows their specially equipped 18V Li-ion batteries to charge while still attached to a drill, driver, or other similar free-standing tool, incorporates some promising technology, but has been met with some criticism from tool users.

Here’s a first-look at the Bosch wireless charging system, a more detailed look at the specific components, and our brief review where I discuss the good and bad. There are some great reader insights and opinions in the comments sections of those posts (as usual).

Note: This was only announced in Europe; there are no USA release plans as of yet.

The biggest complaint I’ve seen so far is that the wireless charging base and drill/driver base are beneficial for stationary users, but far less practical for workers that travel to and from different jobsites. This new accessory – a wireless charging L-Boxx bay – is designed for professional tradesmen who are on the move.

Bosch’s prior wireless charging base and holster are designed for workshop and use in industrial settings. This new charging bay is designed for mobile environments. Still, Bosch makes mention of repair service technicians and others who work directly from their car, and so it’s not quite aimed at all types of on-site workers.

The new Bosch L-Boxx wireless charging bay is designed to be installed in work van racking, or any other similar arrangement, and can wireless charge a battery while it’s in an L-Boxx. That’s right, it’ll charge a wireless-equipped battery through the L-Boxx!

Although Bosch’s press materials don’t explicitly mention it, it seems that the battery must be disconnected from a tool such that it is oriented flat-side-down in an L-Boxx. It also sounds like a special positioning tray must be used in the L-Boxx.

A requirement for inductive charging with the “Wireless Charging L-Boxx Bay” is the matching three-piece inlay set of the L-Boxx. It absorbs impact, protects tools, batteries and accessories during driving, and simultaneously secures the batteries. All L-Boxx models available with inlay will be labeled with the “Wireless Charging” logo from now on.

Starting in September 2015, all L-Boxx 2’s will ship with a compatible insert that allows for wireless charging in the L-Boxx charging station. The insert will also be available separately so as to retrofit your prior L-Boxx 2’s. 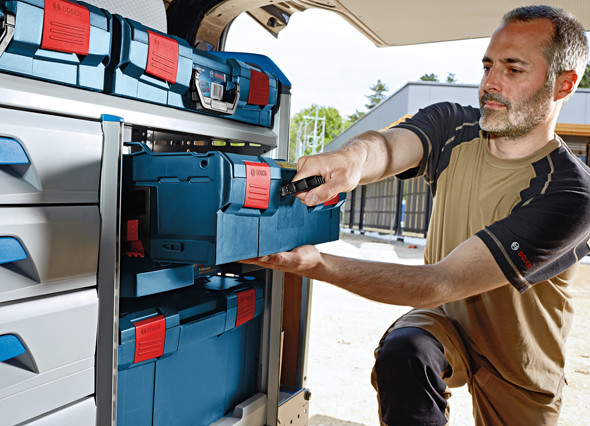 Here’s another benefit – it can simultaneously charge 2 batteries, and not just 1.

Bosch says that the new wireless L-Boxx charging bay is shockproof, and can hold an L-Boxx that’s loaded with up to 10 kg (22 lbs) of weight. The charging bay can be installed horizontally, such as in a Sortimo vehicle equipment system as shown, or vertically. If installed vertically, an L-Boxx is “clicked in.”

The charging bay features a voltage inverter and is connected to a vehicle’s 12V DC power system. It can also be connected to an on-board 230V socket. This is a good time to mention that the Bosch L-Boxx charging bay has been announced for the European market. There’s no word about if or when we’ll see it in the USA.

Bosch’s 18V wireless batteries have fuel gauges, but there’s also a charging indicator on the L-Boxx charging station, so that users can check charging status without having to open their tool box.

Lastly, a 4.0Ah wireless charging battery will soon be available, and I have received confirmation that it will be released in the USA as well.

There are lots of things about the new L-Boxx charging bay that I like. Most significantly, it can simultaneously charge 2 batteries, and it can do this right through the bottom of an L-Boxx. You can check charge status just by glancing at the indicators on the L-Boxx charging bay.

But… it’s designed to be installed in the type of vehicle racking that doesn’t seem to have taken off in the USA. And it’s designed for users that work in and out of their vehicle. It’s probably not going to be very useful for workers that only travel to a jobsite in the morning and home in the evening.

On the other hand, you can install it vertically, and one source I read says it comes with shelf and wall-mounting brackets. With charging brackets, you can get pretty creative in how and where you mount the charging bay, and so it’s not just limited to Sortimo vehicle equipment racks.

If you ask me, Bosch should also come out with an under-side mounting bracket, so that the L-boxx charging bay could be mounted beneath a workbench, tool cart, or shelf, although that would probably pose too many complications for holding batteries in a good position for charging.

It is priced at over $300, and it’s unclear as to whether it even comes with an L-Boxx 2 with fitting insert. It doesn’t seem to come with any Bosch wireless charging-capable batteries either.

I know that a lot of you are thinking something along the lines of: What about me? This won’t benefit me or the way I work at all. Well, Bosch, what else do you have up your sleeve?