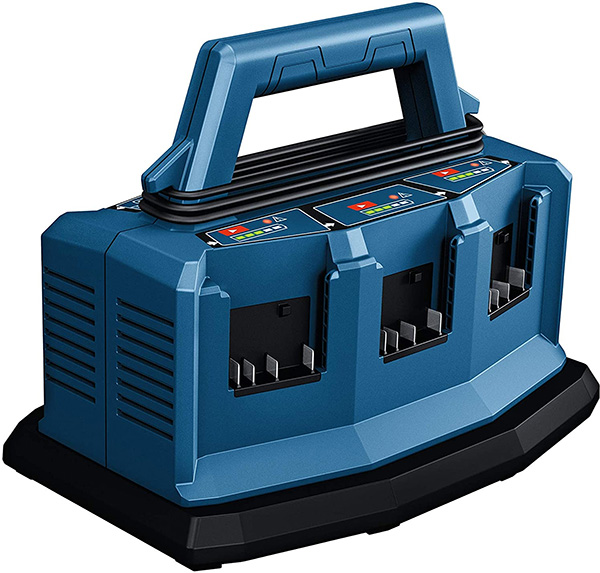 We recently posted about the new Bosch 18V 6-port cordless power tool battery charger. Bosch boasts that it has a 2-stage charging cycle, where it fast-charges batteries to 80% before topping them off to 100% using a slower charging step.

They weren’t very clear about how the fast partial charging worked with this new charger, and so we asked for clarification.

I asked: Does the Bosch GAL18V6-80 charger have any user interface where users can set a battery to stop charging at 80% once quick-charge is complete and before the top-off charging cycle starts?

The way I saw it, there were two options.

1) Each actively-charging battery is recharged to 100% before the next battery starts charging.

2) Each actively-charged battery is recharged to 80%, and then it moves on to the next battery.

Possibility 2 would be more preferable, as it would provide you greater charge capacity in a shorter time. Let’s say you are charging a high capacity Bosch 18V battery, say a 12Ah battery. It’s going to take a very long time to fully recharge before the next battery starts to charge.

Update: It actually works in the 2nd manner, not the 1st, the new post about this is here, what follows below is not accurate.

Here’s what Bosch got back to us with:

Okay, so it’s the first design possibility. What does that mean?

Basically, you have to babysit the charger in order to take advantage of the 80% fast partial charging mode, switching to the next battery manually once you see 4 out of 5 indicator lights illuminated.

Or, just let the charger do its thing and let it run unattended. But then this isn’t much of a feature, is it?

Consider this – let’s say it takes x-number of hours to fully charge a selection of 6 different batteries. You place all the batteries in the charger, and come back before all of them are charged to 100%. The way Bosch designed this charger, you’ll have a couple of batteries charged to 100%, and one battery in the process of recharging.

If the charger were to fully utilize its 80% fast charging mode, you would have more batteries at the ready in the same time.

This isn’t a big deal, it just seems like a missed opportunity.

Bosch has been releasing tools with unspecified “Bosch Bluetooth-Connected” features. Maybe they could have added a Bluetooth module to the charger, so that users could select which type of charging cycle configurations they prefer?

Or, the partial fast charging might have been more beneficial in a simultaneous charger. As a reminder, this is a sequential one-at-a-time charger, similar to the Milwaukee M18 6-port charger that came out 8 years ago.

The charger is compatible with all Bosch 18V Li-ion batteries.

We also asked Bosch about their newer single-port chargers, but have not yet received a response. Their new budget-priced holiday season specials feature a new charger, and I haven’t been able to find more detailed information about it yet. Maybe one of you will be more successful at digging up some details?

What’s the charging rate of the GAL 18V – 20 charger compared to the 40 charger? I also see it has one led indicator rather than two, is this because it lacks dual-cycle charging or some other reason?