ToolGuyd > Power Tools > Power Tool Accessories > Breaking Down Milwaukee Tools’ Matrix Carbide Steel
If you buy something through our links, ToolGuyd might earn an affiliate commission. 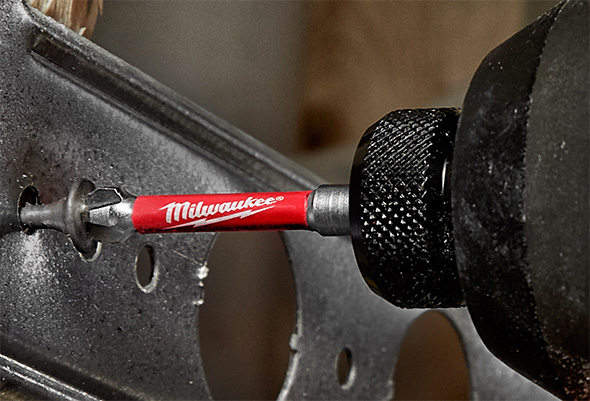 A couple of days ago we posted about the new Milwaukee Tools Shockwave Matrix Carbide impact screwdriver bits.

I’m still working on getting (begging for) more specific details to gain a better fundamental understanding of what makes these new Milwaukee screwdriver bits so good. What makes them capable of driving up to 2800 more screws than competing bits? What makes them so durable that Milwaukee is offering a lifetime tip warranty (which I would presume covers breakage but not natural wear)?

Are the new accessories game-changing?

I’m a little rusty (get it?!) when it comes to steel metallurgy, so I thought to break things down.

Seriously, steel metallurgy isn’t my specialty. I made all attempts to be accurate, but there might be something I’m missing or conveying inaccurately.

The wear resistance of tool steel is strongly dependent on its hardness, although there are other contributing factors as well. Generally, non-impact screwdriver bits should be more wear resistant than impact-rated bits, although the differences are less pronounced now, due to manufacturing advancements and also torsional zones that lessen bit tip stresses.

To better withstand impact driver energy, impact-rated bits are often tougher. There is an inverse relationship between hardness and toughness, leading to a balance of mechanical properties. If a bit is too tough, it will be more prone to deformation. Too hard? Brittle fracture will be a greater risk of problem.

With the popularization of torsional zones, fastening accessory manufacturers are able to tip the scales a little, shifting the balance of tool steel properties towards greater hardness. In use, excess torque is absorbed as elastic energy and later released, decreasing the shock that could otherwise cause breakage.

What is a Carbide, and What Does it Do?

Carbides are chemical compounds that consist of carbon and another element. There’s tungsten carbide, often used in cutting tools, silicon carbide, a popular abrasive, and very many steel carbides. Cementite is an iron carbide (Fe3C).

There are many types of carbides that can be present within steel. Vanadium carbide, for example, especially contributes to the hardness and wear resistance of tool steel, as does molybdenum carbide.

Carbides in steel are formed and modified during different processing and manufacturing stages.

Wear resistance is strongly related to hardness, and the type and properties of the carbides present in a tool steel’s microstructure. 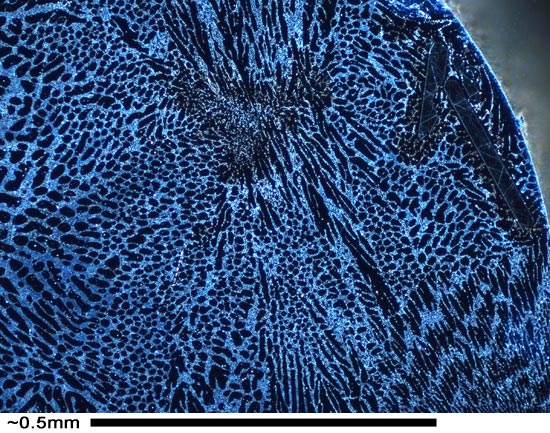 The microstructure of a material refers to its finer structure, often only visible with the aid of a microscope.

Shown above is a dark-field optical microscope image of the cross section of reflowed solder. It was part of a project I worked on 15 years ago, and while not related to tool steel, hopefully it gets the point across.

Manufacturing controls, such as the heat treatment of tool steels, can lead to great microstructural variations in a material or product.

The composition is very important, too. The type, distribution, and size of carbides in a steel or tool steel will greatly influence the properties of the final product.

Carbide Quantity: Controlled by (or at least strongly dependent on) carbon content, the number of carbides will greatly affect the final product.

Think about how much salt goes into baked goods, such as a cake. A grain of salt? Not enough for any impact. A recipe might call of 1/2 a teaspoon, a full teaspoon, and sometimes a tiny bit more. A tablespoon? That’s way too much, and you’re probably going to taste the salt in the final product.

This is one area where tight controls depend whether a tool steel is hard and wear-resistant, but also tough enough to resist brittle failure (breakage).

Carbide Size: The size of a carbide in steel is also important. There can be “too much of a good thing,” with larger carbide sizes contributing to less desirable properties. For instance, carbides that are too large can lower hardness of the final material, despite being harder themselves.

Carbide Distribution: Are the carbides uniformly distributed throughout the material? The average hardness is not going to be as improved if there are pockets of higher carbides concentration. Other times, maybe that is desirable.

Although I can think of examples where you might want or need localized hardening, I am not versed in the relationship between say laser-hardening and carbide formation, if any.

Steel Components: There are different forms of steel, such as martensite and austenite, with the later being an undesirable presence when manufacturing high-performing tool steels and products.

Grain Size: The size of grains in a steel matrix will also hugely influence the hardness and other mechanical properties of the material or product. A finer average grain size throughout the material will contribute to higher hardness.

What Influences the Mechanical Properties of Tool Steel?

There will be too main factors. The steel composition, and heat treatment.

The elemental composition will include alloying elements, such as molybdenum, chromium, and vanadium, among others, and of course carbon.

In short, the processing and especially heat treatment of tool steels very significantly determines the microstructure of the material or product.

So, with all that in mind, what do we now know about Milwaukee’s Shockwave Matrix Carbide Steel screwdriver bits? Unfortunately, nothing new, but hopefully all this background information clearly explains our guesses and presumptions, and brings everyone to the same page.

“Matrix Carbide Steel” suggests that there are small carbides uniformly distributed throughout the steel matrix, which can really describe any commercial tool steel.

In order for the new Matrix Carbide Steel to deliver greater wear resistance, we should expect to see fine carbides uniformly distributed throughout the steel matrix. Compared to other impact-rated bits, we might see different carbides, smaller-sized carbides, a more even distribution, or maybe even other variations.

The new bits are suggested to be harder as well as more wear resistant, given how they’re described, with improvements to shock absorption to reduce the potential for breakage without having to make the steel tougher (which would reduce hardness). So they could be harder due to microstructural enhancements, but also sufficiently resistant to shock breakage due to geometric improvements to the reduced-diameter torsion zone.

Or, it is also possible that the hardness and toughness are comparable to that of other bits and accessories, but with microstructural enhancements that contribute to greater wear resistance, and this would more specifically involve carbide size, composition, and distribution optimizations. In my opinion, but keeping in mind that I am not experienced in tool steel or fastening accessories manufacturing, I think this would be more difficult to accomplish.

A third possibility is that the tip is modified to be more wear resistant compared to the rest of the bit, including the torsion zone and hex shaft, but that seems far less likely for products of this type.