ToolGuyd > Hand Tools > Screwdrivers > Reader Question: Broken Screwdriver Tips?
If you buy something through our links, ToolGuyd might earn an affiliate commission. 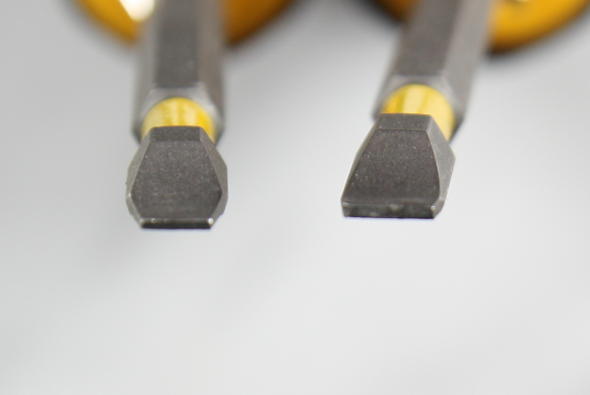 A reader wrote in with a couple of great questions, the first dealing with broken screwdriver tips.

A couple of days ago at work I managed to badly break the tip of a Stanley Fatmax (black and yellow handle with red cap) when tightening a non-stuck flathead. I’m just wondering if it’s particular common for this model of screwdriver and if Stanley’s more recent models have remedied this. (Personally I have Craftsman ones at home that I got around 15+ years ago and haven’t had anything like this happen to them).

Stanley screwdriver sets are pretty cheap, such as this 10-pc set for $8 on Amazon, and this 20pc set for $14.10. That said, they shouldn’t be breaking when tightening a screw that’s not stuck.

Going by Michael’s description of the screwdriver being black and yellow with a red cap, it seems to have been a slotted flathead screw.

Screwdriver tips are often heat treated to be harder. Hardened tips wear slower. But, hardened metal can also be more brittle, and prone to breakage. The heat treatment needs to be carefully controlled so as to arrive at the perfect balance between hardness and toughness.

With inexpensive screwdrivers, I would be reluctant to comment on consistency in a single batch, let alone over the span on several years. I really don’t know enough about the specific manufacturing processes.

I would also need to know more before I commented on the quality of the screwdriver.

How it was used before the breakage could give clues about why it broke. Maybe it was previously used on a hard fastener that had a bur, nicking the screwdriver tip. A little nick, a scratch, sometimes that’s all it takes to start a break.

Since this happened at work, were you the only one using it, or could someone have abused it in some way in their prior use? Even dropping it on a concrete floor could import some damage, and it wouldn’t necessarily be obvious.

Consider a pane of glass, acrylic, or other hard and brittle sheet material. Such sheets can be broken down to size by scoring a straight line. Then, over a straight edge, only moderate force is required to snap the sheet into 2 pieces.

Metal tools can sometimes behave in a similar way, where something can just break off.

If this was the first time the screwdriver was used, or it was only used in a very gentle manner before, then it’s probably just a junky cheap screwdriver.

If a tip is too brittle, it’ll break above a certain force. If it’s not hard enough, it’ll wear or deform quickly.

It could have also been a small defect in the screwdriver tip of some kind, at one specific spot. It happens.

A screwdriver that’s manufactured to retail for less than $1 as part of a set isn’t going to be very high quality. But it’s not supposed to just break very easily either. I would encourage you to contact Stanley for warranty replacement, but the shipping will cost you more than it’s worth.

Or maybe the screw was junky. Or the screwdriver wasn’t the right fit for that particular screw. That will happen too. A screwdriver might fit too shallowly, or it might not be wide enough for a screw.

And once there’s a little too much force in one spot, it could be enough to break the entire tip.

How many slotted screwdrivers have you broken? Phillips? Other styles? I’d bet that smaller sized slotted drivers are broken the most.