I first learned about Brous Blades last year, when I read a review of their Bionic folding knife. I didn’t buy it, as numerous reviews pointed out minor flaws here and there, such as very aggressive jimping that could make it painful to repeatedly flip the knife open.

Then, when browsing BladeHQ’s site, one of my favorite knife dealers, I came across the Bionic 2.0. A quick Google search showed that Jason Brous addressed many of the complaints people had with the original Bionic knife.

The Bionic 2.0 knife is available with several different handle colors and blade finish options. I couldn’t really find the one I wanted – a blue handled knife with silver stonewashed blade, so I bought a green Bionic 2.0 knife with black stonewashed blade, from KnifeWorks, another of my favorite knife dealers. This was my next choice of handle color and blade finish.

Let me just say this upfront – I returned the knife. I was happy with most aspects of it, but I was not fond of the locking mechanism. My initial take was that the knife was defective, although I have since come to modify my assessment. It seems that the issue was more a matter of preference. More on that in a bit, and keep in mind that what I didn’t like about the knife, others might love.

If not for the one thing I didn’t like about the Bionic 2.0 that caused me to return it, it might have become my most-carried EDC knife.

My goodness, the anodized aluminum handle is absolutely gorgeous! I already knew that the handle is made from aluminum, but the reality of it really sinks in the first time you hold the Bionic 2.0. This is a very light knife. Not too light, but pleasantly light.

Although I returned my Bionic 2.0, I think that Jason Brous is a very talented knife designer, and I will be following his work for years to come.

One of the nice touches of this design is how the pocket clip can be switched from one side to the other. The opposite site features a little fill-in placeholder. It’s not necessary, but I like how it avoids the potentially jarring look of an empty groove in the handle.

The knife blade opens by means of a flipper mechanism. There is also a long groove, or what looks to be the largest, most comfortable, most user friendly, and flat out best nail nick I have ever seen on a knife. I LOVE the spine design on the Brous Bionic 2.0 knife blade. This knife blade features a rare combination of great form + great function.

There is some jimping, which is toothy, but not finger-scrapingly sharp. It is just perfect – I would have changed anything about this. 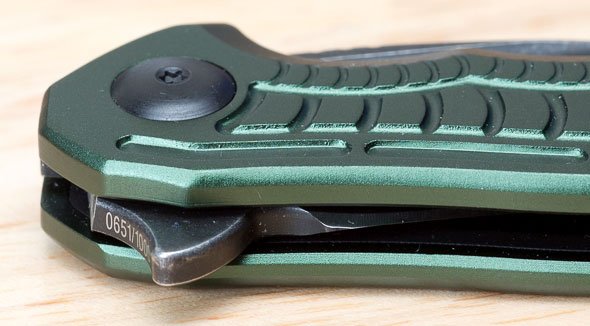 Brous managed to cram as large a blade as possible into the knife handle. Here, you can see where the bottom edge of the blade is just within the handle. There’s no injury risk that I can tell, I’m only bringing it up because it shows how thoughtful Brous was with the Bionic 2.0 design.

This is one of the smoothest knives I have ever encountered. And it is repeatable too. Flip, snap, close. Flip, snap, close. You can do this over and over again. If anything, maybe the flipper mechanism speeds up, although it’s hard to imagine a manual folding flipper knife that can open any faster. 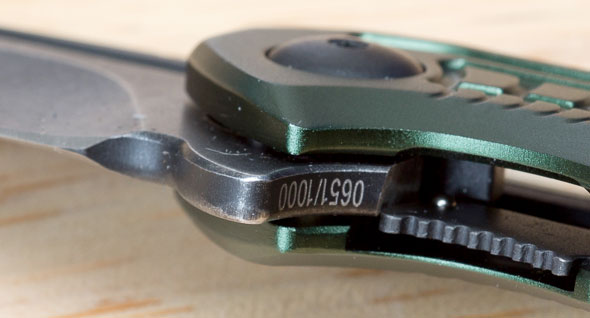 And here’s the liner lock, with very shallow engagement. To me, this is too-shallow of an engagement, to the point of being intimidating. I don’t feel comfortable with this little lock engagement. With shallow engagement like this, it might be possible for the lock to fail under certain usage conditions, such as where they might be a twisting motion.

I contacted Jason Brous and asked whether this was to be expected from all Bionic 2.0 knives, or if I encountered a fluke defect.

This is what he said:

98% of our customer base wants that EXACT early lock up, all of our knives have been tested and we guarantee it will not fail. Also opening and closing the blade will help settle in that lock a little bit more. I was surprised too when I first started making knives but we had a lot of customers returning knives for NOT having early lock up. It may look scary but I guarantee ALL the locks are tested before shipping out.

Okay, so Jason confirmed this is how all Brous Bionic 2.0 knives lock up. Despite Jason’s guarantees, I don’t think I would be comfortable using a knife with such little lockup. But, don’t let my preferences dissuade you, there are a lot more positive things to say about the knife.

The knife blade itself is magnificent. After I packed it up and sent it back to the dealer, I nearly cried a little inside. There is a lot of metal right behind the edge, which also seems to have a much greater grind angle than most other knives this size. All of that extra metal should give the edge a lot of added strength.

The knife blade is made from D2, which is a heavy use alloy. It’s what Milwaukee plans to use for their new EDC knives. 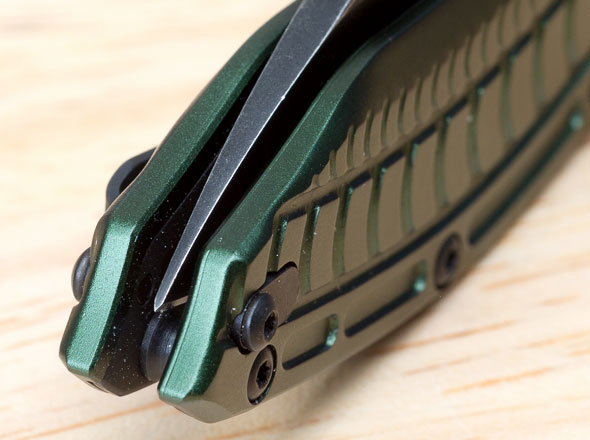 The Bionic 2.0 knife packs a 3-inch blade into 4-inch handle.

And here you can see how the tip of the knife nearly reaches the very end of the handle. A long time ago I discussed my opposition to the idea that knife ratios can tell you a lot about a knife. Well, with the Brous Blades Bionic 2.0, I found myself immediately thinking about how it must have a much higher than average blade:handle length ratio. This is what you want to see in an EDC knife.

The Bionic 2.0 has similar dimensions to the Benchmade Mini Griptilian that I reviewed.

The handle is a little short, but very comfortable, not to mention ergonomically shaped. The grip leads your forefinger to rest up against the flipper level, which can be a little constraining, but it’s overall comfortable.

In hindsight, if you’ve got your finger in that groove with a strong grip, it might be difficult to unintentionally close the blade on your hand should the lock fail. 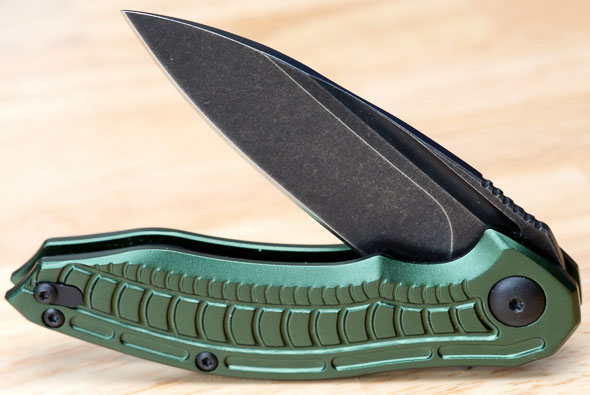 Overall, the Brous Blades Bionic 2.0 is a fantastic knife. There is a lot to like about this knife, although I ultimately returned it after just one day of ownership. I didn’t even carry it anywhere.

The liner lock’s early engagement just didn’t feel right to me – my initially assessment was that this posed a substantial personal injury risk hazard. It seems that maybe that was me just being overly worried, as the designer personally guaranteed the safety of the knife, even mentioning that this was a deliberate feature that 98% of users requested or favor.

I’ll leave it to you form your own purchasing decision about the Bionic 2.0. If you’re the type that prefers early liner lock lockup, then there’s nothing to worry about. Aside from my liner lock concerns, I found every other part of the Bionic 2.0 knife to be just about perfect.

The Bionic 2.0 is a pricey little knife, but I think you get far more than what you pay for. The knife photographed here retails for $188 (via KnifeWorks)