ToolGuyd > Hand Tools > Knives > Buck Inertia Knife Review
If you buy something through our links, ToolGuyd might earn an affiliate commission.

Some time ago, I purchased a Buck Inertia folding knife. It features an assisted opening mechanism, milled aluminum handles, and its looks appealed to me.

I’ve used Buck knives before, but never an assisted opener from them. I was curious, and it seemed like a good opportunity to try something new. At the time, it fit the criteria of what I was looking for, USA-made folding knives that could be had for between $35 and $75. This one was $60.

My first Buck Inertia knife had a problem with the liner lock, and so I returned it for a replacement. The second seemed to work fine. And by “work fine,” I mean that there was no obvious manufacturing defect.

Part of the appeal of this knife is that it has a lock that prevents accidental openings, and it works differently than the one in my Kershaw Onion Leek knife, reviewed here. But that’s also what I really don’t like about this knife.

I’m going to cut to the chase, even though this is a short review. I do not like this knife. It seems okay, and has some nice qualities, but overall it just doesn’t work for me.

When you first open the knife, it looks like this:

That little locking nub slides forward to create a smooth and seamless spine. I don’t like having to do that extra step each time. If this would be your only knife, you’ll get used to it, fast. But it’s not my only knife, and it bugs me. 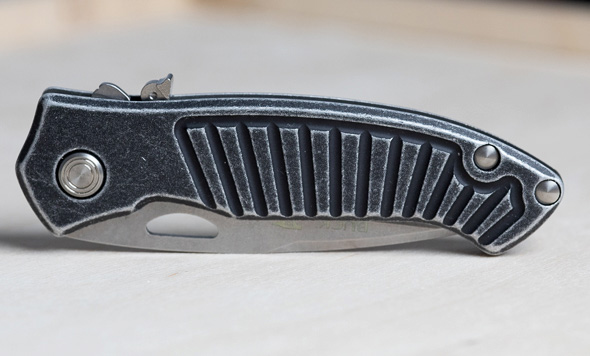 The locking nub has to be in this back-pivoted position in order to be able to flip the knife open. 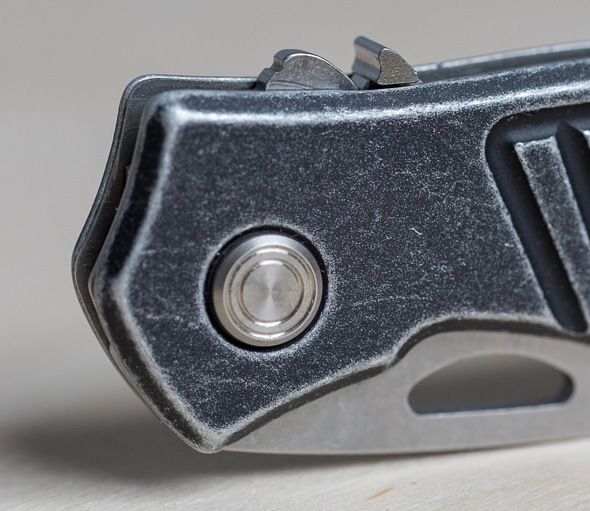 Here it is in the forward position, preventing the knife from being opened unintentionally, such as if it’s jingling around in your pocket.

The blade itself is usable. It’s nothing special, but I also don’t have much to complain about. 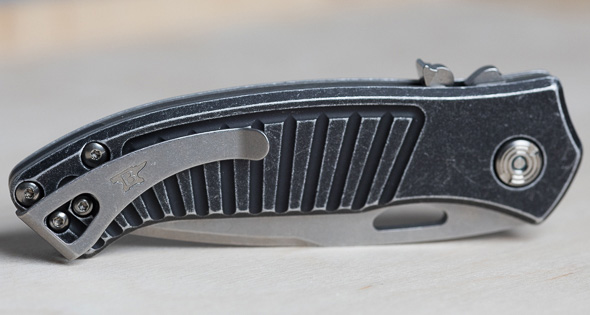 The pocket clip is deep-carry style. It’s also a little large, but I don’t mind it much, especially in the context of the locking tab. 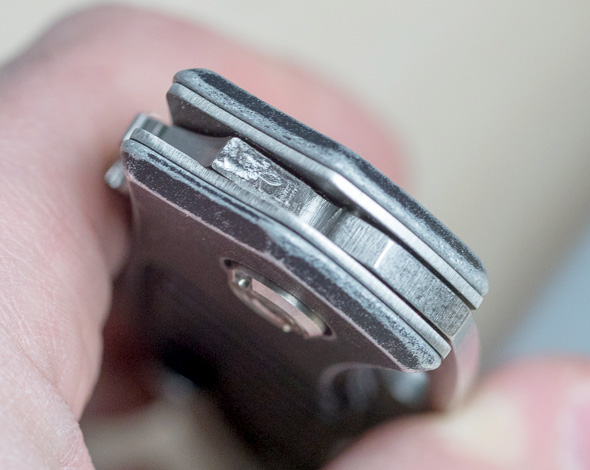 One other concern I have is about liner lock wear. There are already gouges on the blade where it slams into the liner lock. Some wear in is expected, but this seems a little much for a knife that I rarely handle. Is the metal improperly hardened? Blade steel should be more resilient than that.

I bought the knife thinking yay, a USA-made assisted opening knife by Buck. But my immediate and lasting impression is that the knife just doesn’t fit me well.

If someone were looking for an affordable USA-made folding knife with assisted opening mechanism, I’d direct their attention to the Kershaw Dividend, reviewed here instead. That knife doesn’t have a safety lock, though. For a safety lock, look at the Leek.

Overall, I feel left down.

Oh, and the rounded and lighter color edges? That’s part of the look. I’m guessing it was anodized and then thoroughly tumbled. The same handle and blade would have worked a lot nicer if the knife was instead built with a manual opening mechanism, whether thumb stud, flipper, or the elongated hole that’s already machined into the knife. Maybe I can try to convert the knife, but probably not.

I am hesitant to recommend against buying this knife, so I’ll say this – if you think you might like it, try it out at a knife shop or buy it from an online retailer with a lenient return policy.

This knife was purchased at retail.