ToolGuyd > Hand Tools > EDC, Pocket, & Multitools > Buck Knive’s Competitive Advantage Comes from Their Blade Steel
If you buy something through our links, ToolGuyd might earn an affiliate commission. 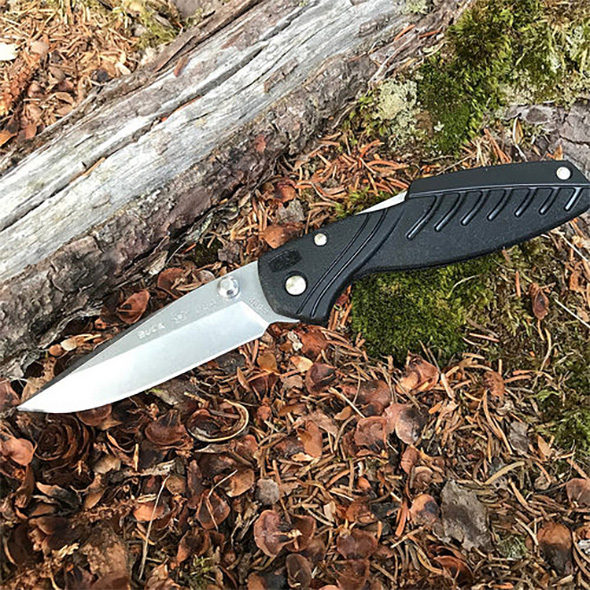 If you need or want a pocket knife and don’t want to spend a third of your paycheck on it, there are a bevvy of options. Sorting through these options, however, is exceptionally difficult.

Not only are their hundreds of budget knives out there, but a lot of them are positively awful, many using steel from the inferior Cr series (8Cr13MoV being the most common and a bit below average, anything less, like 7Cr, should probably be a dealbreaker).

Among the many inexpensive knives out there, Buck makes some of the best blades. Most Buck knives are made in the USA, there are number of solid designs, and they all run Buck’s own 420HC. This steel is truly Buck’s secret advantage.

The steel performance of a knife relies on three things: the grind or blade geometry, steel chemistry, and heat treat. The secret to Buck’s 420HC stems from its heat treat.

Many years ago, Buck formed a working relationship with Paul Bos, Blade Hall of Fame member and probably the most famous heat treater in the world. Most steels come with instructions on how to heat treat them from the steel maker, but Bos modified 420HC’s heat treat protocol and in the process made the steel perform exceptionally well. His protocol is, of course, a trade secret and has been used by Buck even after his retirement—Paul Farner carries on Bos’s work at Buck.

Over the years, my experience with blade steels demonstrated to me that Buck’s 420HC really punched above its price point. Some digging and waiting proved this intuition to be true.

In the cutlery world, edge retention tests are done using a CATRA machine, which forces a knife to make a series of precise cuts in a standardized medium (usually thick, sand impregnated paper). These tests show that Buck’s 420HC performs better than other brands’ 420HC blades.

Similarly, and a bit more close to reality, Pete over at Cedric and Ada Outdoor performs a series of cut tests on blade steel and has developed a huge database. He cuts sisal rope until the blade no longer cleanly slices paper. In these tests Buck’s 420HC did quite well.

For example, the default “cheap knife steel” 8Cr13MoV made 39 cuts. Regular 420HC made 44 cuts. VG10 made 75 cuts. Buck’s 420HC, however, made 67 cuts. Buck’s 420HC can be found on knives that are as cheap or cheaper than 8Cr knives, and yet it cuts almost like the standard bearer from Japan, VG10. Note that D2 and 14C28N also do well here but they are usually found on knives a bit pricier. Pound for pound, or penny for penny, its very hard to beat Buck’s 420HC.

There are a lot of good knives from Buck that run their 420HC. I like the Vantage series, though, having owned two, they can be a bit spotty on the fit and finish. The venerable 110 is excellent, but ginormous. Its smaller brother, the 55 also sports the steel and look of the 110 in a package have the size. Finally, the Rival series is a very nicely designed knife that is both cheap and has a Buck 420HC blade. The only Buck I have handled that I would always avoid is the Spitfire and Mini Spitfire. Their fit and finish issues were beyond what is tolerable.

If you are in the market for a good work knife, something that won’t break the bank, the best value in the world in terms of steel is Buck’s 420HC. It has proven its value over many decades and it is truly a secret weapon.